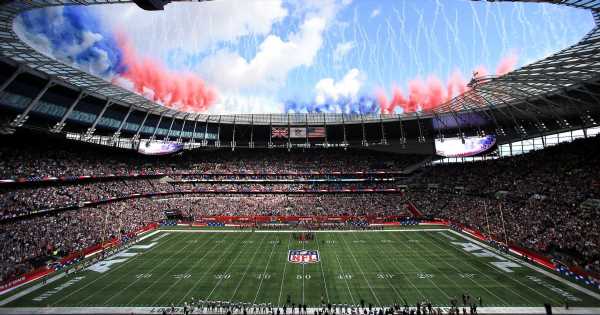 The NFL returned to London on Sunday with the Atlanta Falcons defeating the New York Jets 27-17 at the Tottenham Hotspur Stadium.

The game was watched by a sell-out crowd of 60,589 fans who celebrated every first down, touchdown and field goal as if it were a last-minute winner in the Premier League.

The game was, for many fans, an event. A day out. The chance to see a sport many have never seen in the flesh before. That was evidenced by the incredible queues outside the Tottenham club store – which had been converted into an NFL store for the day. Touts patrolled the streets to find anyone willing to pay over the odds for tickets, such is the popularity of the event.

The game itself was entertaining, going right to the death as the Jets attempted a second-half comeback, only for Matt Ryan to lead the Falcons to their second win of the season. As usual with the London games, a host of celebrities were in attendance including Christian Pulisic and Vernon Kay.

But all that begs the question – why on earth would the Premier League decide to copy it and take games abroad?

Premier League officials have recently discussed the idea of hosting games abroad during pre-season, with The Athletic claiming the idea will be designed with a long-term goal of hosting competitive games in markets such as America, Asia, Brazil and India.

But if that were to be the case, the league would be falling into the trap the NFL avoided in 2007 when it first came to England.

When the NFL first came to London, however, it came with a regular season game. The wins/losses went on the records of both teams, and the result had major implications for the rest of the season.

The league enjoyed a storming success, and has been back every year with increased numbers of games ever since.

Part of the reason behind the success of the International Series is the competitiveness.

But what would be the point of pre-season football matches abroad? Brazil has its own league, are we expected to believe Botafogo or Sao Paulo fans would pay hundreds of pounds to watch Burnley vs Aston Villa in a pre-season tournament, when they could just wait and watch the Premier League on TV anyway?

NFL fans have no such option. The British American Football league is growing, but is nowhere near the size of the NFL in England. As a result, going to watch the Atlanta Falcons beat the New York Jets is a once-in-a-lifetime experience for some.

Should the Premier League take games abroad? Give us your thoughts in the comments section.

Tottenham's new stadium isn't just the toast of the Premier League – it also doubles up as a purpose-built NFL arena.

The stadium effectively eliminated one of the biggest complaints fans had about games at Wembley – being too far away from the action.

Speaking to fans in attendance at the Tottenham Hotspur Stadium, the thing many were most impressed with was the proximity of the pitch.

In order to get set up for an NFL game, the pitch is simply broken into sections, before being wheeled away into the underground car park.

But that's not a luxury facility shared by many stadiums around the world, making it tough for the Premier League to find an appropriate venue.

West Ham fans will know all-too-well the perils of watching their team from a distance, and it wouldn't be a good look for the Premier League if teams were forced to play in baseball stadiums or in venues without any soul.

Premier League teams pride themselves on atmosphere, and few would argue games were the same during the Covid-19 pandemic when there were no crowds.

As a result, the Premier League would need to be extremely cautious about maintaining atmosphere at games and selecting stadiums with fans close to the action.

The NFL International Series has been wildly popular with fans since its inception. Estimates suggest just two per-cent of fans attending games are from America, with the rest being from the UK.

Sunday's game kicked off at 2.30pm UK time, but for fans in the West Coast of America, they'd be forced to wake up at 6 in the morning to watch the game. While both sets of fans for Sunday's game were based in the East coast, it's still a pretty early wake-up, and one that has proved fairly unpopular in recent years.

Put it this way – to ask Wolves fans to get up and watch their team play Leeds at 6am would be a tall ask, and would obviously be a huge consideration to league officials planning to take the game abroad.

It's tough to imagine Premier League fans would be too excited about the prospect of their team being shipped thousands of miles away to play a game, especially when ticket prices are as high as they are.

For example, would a fan paying £400 for a season ticket be too thrilled about having one of those 19 home games taken to Los Angeles or New York? Doubtful at best.

Putting on a show

NFL regular season games are strictly played on just three days – Thursday, Sunday and Monday. For that reason, even games between lesser franchises are considered marquee events for fans.

But for Premier League fans, games are much more frequent. A Manchester City fan, for example, has the chance to watch their team 19 times at the Etihad in the Premier League, as well as games in the Carabao Cup, FA Cup and Champions League.

But for NFL fans, their chances are much more limited. The Green Bay Packers waiting list for season tickets is believed to have upwards of 139,000 fans on it. Roughly 750 tickets are made available for purchase each year. That makes NFL games much more of a spectacle whenever they are played.

The New York Jets, who lost to the Falcons on Sunday in a rather one-sided affair, will play just nine home games at MetLife Stadium this year. For that reason, every game is an event, and every time the game comes to London, the rarity of it ensures fans buy tickets in their droves.

The Premier League going abroad would face difficulties in following the same format, but there's no guarantee fans abroad would take to regular season games with the same gusto as they've been adopted by NFL fans.