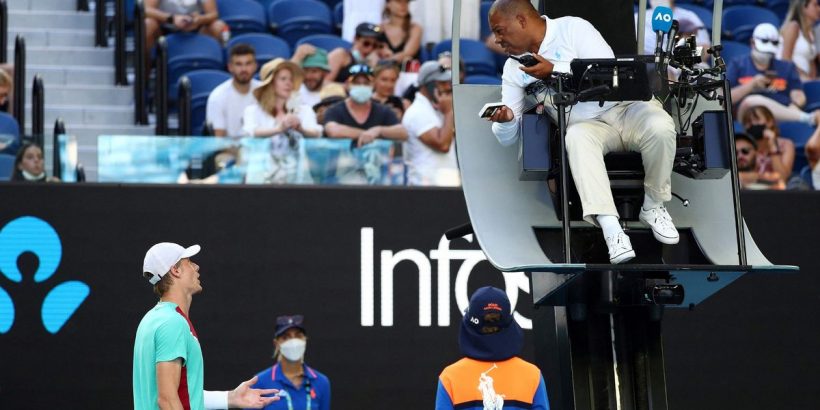 Denis Shapovalov didn't hold back as he delivered a withering assessment of the officiating during his Australian Open defeat to Rafael Nadal on Tuesday when he labelled the umpire "corrupt."

The tennis veteran weathered a mid-match comeback attempt from Shapovalov to emerge triumphant in their five-set fracas, but the back-and-forth result wasn't reached without incident.

It was soon after Nadal had eased to victory in the opening set that Shapovalov made it clear he felt the No 6 seed was being afforded an unfair amount of time between games.

Bernardes retorted to Shapovalov's insistence that Nadal should be given a code violation, suggesting the 22-year-old was himself not ready to play because he was too busy arguing.

The two-time Grand Slam quarter-finalist swiftly found himself two sets down before producing a short-lived revival at the Rod Laver Arena.

After the match eventually got away from him with a backhand volley that went wide, Shapovalov then furiously smashed his racket on the court as Nadal celebrated his hard-fought victory.

The victory kept Nadal on course to challenge for what would be just his second Australian Open title, having previously defeated Roger Federer in five sers to win the tournament in 2009.

Shapovalov appeared to have calmed down in the wake of his maiden quarter-final in Melbourne, although he failed to back down entirely in his post-match conference.

Who do you think will win the 2022 Australian Open men's singles? Let us know in the comments section.

"I think I misspoke when I said that he's 'corrupt' or whatever," he told reporters. "It's definitely emotional but I do stand by my side.

"I think it's unfair how much Rafa is getting away with. I am completely ready to play and the clock is ticking towards zero. I'm looking at the umpire and obviously I'm going to speak up and say something.

"I've been ready to play for a minute and a half and he tells me he is not going to give him a code violation because I'm not ready to play and to me it's a big joke and then after the fourth set the guy goes and for the same thing last year I'm not allowed to take a toilet break when I asked for a medical.

"He had already taken two medicals. He was getting medically evaluated – that's what the umpire said after the fourth set and after the evaluation the guy goes and takes a toilet break."

Shapovalov came from behind to edge his maiden meeting with Nadal at the ATP Masters 1000 Canada in 2017, but the Spaniard has gone on to win their four encounters since then.

This was the first time the pair had met under major conditions, however, offering some indication as to why the junior player may have felt under extra pressure to succeed.

Clearly not over their exchange concerning the time Nadal was taking between sets, Shapovalov was later pulled up for staring at Bernardes, who said: "You were looking at me; there were eight seconds to play.

"What do you want? Why are you looking at me like I need to watch the time? You have the shot clock. So this, it disturbs me."

Nadal responded to Shapovalov's judgement in his own post-match breakdown and said his vanquished foe would "understand later on after he thinks the proper way that probably he was not right today.”

"It's just like, where's the line? Where are you going to step on the players? I respect everything Rafa has done and he's an unbelievable player but there's got to be some boundaries and rules set," Shapovalov continued.

It was almost fitting that Nadal sealed Tuesday's victory with a backhand winner not long after Shapovalov was himself handed a time violation.

The Spaniard later said that he was "completely destroyed" by the match, having been unsure as to whether he would even be able to compete at the Australian Open until recently.

Nadal will advance to face Matteo Berrettini in the semi-finals after his five-set victory over Gael Monfils, with the Spaniard looking to secure his spot in the Melbourne decider for the first time since 2019.