Ronnie O’Sullivan is back in action again after winning his sixth world championship in August. The Rocket is going for glory in this week’s English Open in Milton Keynes and he showed up for his first-round match against Brian Ochoiski with his nails painted pink.

Why does Ronnie O’Sullivan have pink nails?

“I was talking about it to my friend Andrew and I said I would wear them in a match or tournament,” said O’Sullivan.

“It’s an important cause. More important than the game of snooker. I want to give it decent TV exposure. Maybe more guys will show some bottle and put pink varnish on! 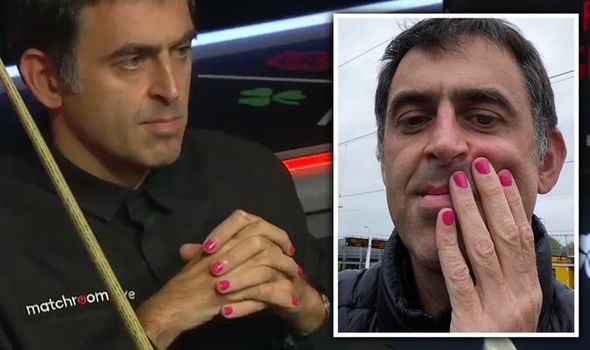 “I had it done in a nail shop. I have to thank my fiancee, too. I really like it.

“This is for the rest of the week. Even if I go out and have to do punditry, I will still keep them on. Now I know why women like painting their nails.

“Creating some awareness can only be a positive thing.”

O’Sullivan has also said he is open to keeping the nail varnish on after this week’s tournament has finished.

He told Eurosport: “You know what, I actually really like it.

“I think this could be here to stay. I can see myself still wearing it once breast cancer awareness month has gone.

O’Sullivan’s 4-2 victory win over French youngster Ochoisk was his first since claiming his sixth world title.

Following his latest Crucible triumph, the 44-year-old suffered a shock loss to teenager Aaron Hill at the European Masters and then withdrew from the Championship League due to its COVIDd-19 isolation rules.

But he said he was happier to compete this week as more time between matches allowed him to leave the bubble environment.

“You can come for your test and go,” said O’Sullivan.

“I have bad stomach problems so I have to be careful what I eat. I couldn’t get my own food (at the Championship League). This is a lot easier.

“I’m going to get the train, spend a day at home and come back. Even though they do the tests I am ultra careful when I come to the venue.

“You don’t even want to mix with anybody just in case they get caught and then you’ve got to isolate for two weeks.”

O’Sullivan also admits he could skip the Masters again this season after withdrawing from January’s event at Alexandra Palace.

“I didn’t miss playing in the Masters last year,” he said. “To be be honest I don’t really enjoy that tournament much.”