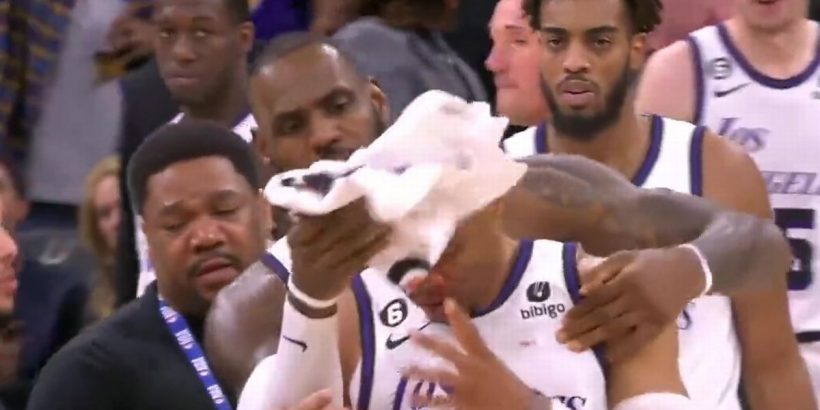 Tensions flared on Saturday after LeBron James stepped in to prevent all-out war breaking out during a clash between the LA Lakers and the San Antonio Spurs.

The four-time NBA champion jumped in on behalf of team-mate Russell Westbrook, who was left leaking blood from his forehead following a foul by Zach Collins. San Antonio's centre was swarmed by the opposition after accidentally elbowing Westbrook on the head during a block attempt.

But just as the two teams were on the brink of a mass brawl, James stepped in to prevent Westbrook landing himself in hot water. Instead, the 37-year-old shepherded his comrade away from the melee as he dabbed his split head with a towel.

Referees handed Collins with a 'flagrant 2' foul and ejected him from the match, while Westbrook got away with just a technical foul for his role in the flare-up. The 2017 MVP was patched up and plastered before helping the Lakers see out a 143-138 win at the AT&T Center in Texas.

"His health is more important than the game of basketball," James told reporters after the result. "So just tried to stop that and let the training staff do their job after we got him over to the bench."

Who do you think will be crowned NBA champions in 2023? Let us know in the comments section.

It took some restraint for the veteran not to dish out some justice in response to the stray elbow. "I actually saw the cut right when it happened once he got up off the floor and wanted to, uh, wanted to do something to Zach," he added.

The Lakers are already dealing with the absence of guard Patrick Beverley, who served the second of a three-game suspension on Saturday. James' intervention helped save his side from losing another important member of the line-up just as they gather form.

LeBron's leadership wasn't only evident in his shielding of Westbrook considering he also put up a season high of 39 points. The Lakers have now won five of their past six games but remain 13th in the Western Conference following a torrid start to the season.

Point guard Westbrook was one of the players who copped flak for his underwhelming output at the beginning of the campaign. However, he's now led (or joint-led) the Lakers in assists for 10 straight games and looks to have regained some of his past form.

Saturday's result must be taken with a pinch of salt considering the Spurs have lost eight games in a row, tied for the fourth-longest string of defeats in the franchise's history. Nonetheless, the Lakers look like a more unified outfit of late, with LeBron continuing to lead by example.