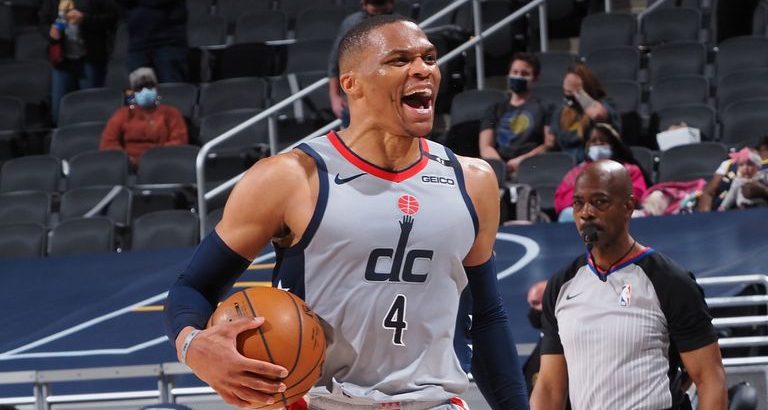 On Saturday, Westbrook found Bradley Beal for a jumper at the free-throw line in the Washington Wizards’ game against the Indiana Pacers.

Beal’s shot gave Westbrook his 10th assist of the game and his 181st career triple-double, tying Oscar Robertson’s all-time triple-double mark. Westbrook finished with 33 points, 19 rebounds and 15 assists in the Wizards’ 133-132 OT win over the Pacers.

Now, he stands just one triple-double away from surpassing a record few thought anyone could ever catch.

Westbrook and the Wizards visit the Atlanta Hawks on Monday night as Washington tries to both get Westbrook his milestone and keep pace in the Play-In Tournament chase. The Wizards are the No. 9 seed in the East and would face the Pacers in the Play-In if it started today.

Long before the term “triple-double” was coined by media members in the 1980s to refer to the all-around performances of Magic Johnson, Robertson had set the standard for the statistical achievement of recording double-digits in three of the five major stats categories. In fact, Robertson did it when points, rebounds and assists were the only three major stats; steals and blocks didn’t become officially tracked until 1974-75 – one year after his retirement.

Robertson’s record of 181 triple-doubles seemed as unattainable as breaking Wilt Chamberlain’s 100-point game, Usain Bolt’s 9.58-second 100-meter sprint, Rickey Henderson’s 1,406 career stolen bases or Bill Russell’s 11 championships. Magic only reached 138 in his Hall of Fame career; and Jason Kidd was the only other player to break 100 as he finished with 107.

Then, 40 years after Robertson’s career ended, along came Westbrook and his incredible run of triple-doubles over the past seven seasons. After recording only eight triple-doubles in his first six seasons combined, Westbrook has tallied 173 over the past seven seasons, and will likely take sole possession of the all-time record before the 2020-21 season comes to a close next Sunday.

A true sign of greatness is making the remarkable seem routine.

Westbrook tied the record on Saturday against the Pacers – a team he has recorded nine triple-doubles against over his career, tied for his most frequent triple-double victim – and the team sitting just above Washington in the Eastern Conference standings. 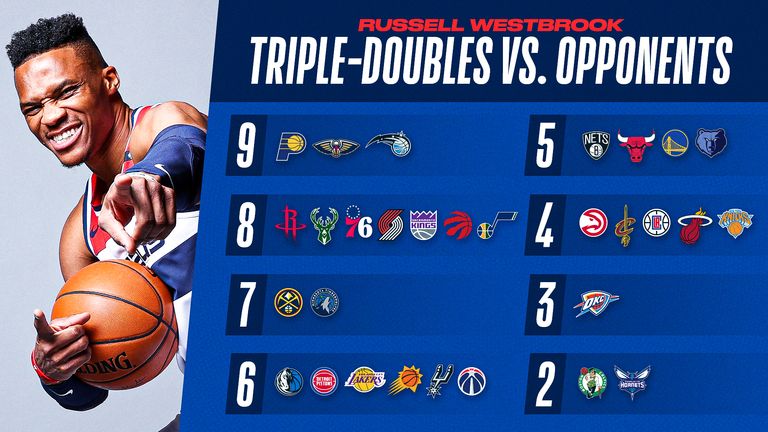 LeBron ranks second among active players with 99 career triple-doubles, needing one more to become only the fifth player in history with at least 100 in a career.

After LeBron, the next highest active player is Westbrook’s former OKC and Houston teammate James Harden with 58. Two names to watch among the active leaders are Nikola Jokic (56) and Luka Doncic (35) as they are in their sixth and third seasons, respectively, giving them plenty of time to climb the ranks.

However, as Westbrook proved, the path to a record-breaking career does not have to follow the mould that previously existed. As stated earlier, Westbrook did not start his career as a triple-double machine, having just eight triple-doubles in his first six seasons combined.

In contrast, Robertson accumulated 148 of his 181 triple-doubles in his first six seasons in the NBA and had just 33 from his seventh season until the end of his 14-year career. Westbrook has had more triple-doubles this season (his 13th) than Robertson had in seasons 7-14 combined. It was during Westbrook’s 2016-17 MVP season that he also matched a feat previously only accomplished by Robertson – averaging a triple-double over a full season. Westbrook would pull off that rare feat not just once but is on pace to do it for the fourth time in the past five seasons.

While many have celebrated Westbrook’s run toward this record – including Robertson, who was in OKC when Westbrook broke his single-season record and has spoken openly about rooting for Westbrook to take over the record – others have looked to criticize Westbrook by saying that he’s hunting triple-doubles and too concerned about his own stats.

Westbrook is not a player that just barely reaches the 10-10-10 needed for a triple-double. He often blows past the benchmarks in the second or third quarter and goes on to post some of the most incredible stat lines in recent memory.

Just last week in another encounter against the Pacers, Westbrook finished with 14 points, 21 rebounds and 24 assists, becoming the first player with multiple career games with at least 20 boards and 20 assists; Wilt Chamberlain is the only other play with one such game.

Clearly not showing any signs of slowing down his torrent of triple-doubles, the unanswerable question is how high can Westbrook set the bar for others to chase? It took over four decades for a true challenger to Robertson’s record to emerge. Is Westbrook’s eventual challenger in the league yet, or is there a kid watching Russ compete each night and drawing inspiration to become an all-around basketball force of their own one day?