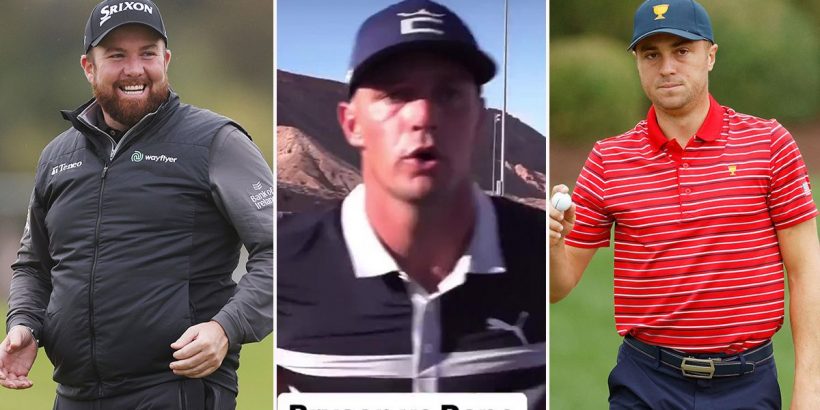 Shane Lowry and Justin Thomas have led the brutal jibes towards Bryson DeChambeau after cringeworthy footage emerged of the divisive LIV Golf star.

'The Scientist' found himself the subject of ridicule this month at the latest rebel event in Chicago, managing to clothesline himself with a course rope during his final round. After several minutes appearing visibly shaken and claiming he couldn't see, the American duly recovered to sink his impending birdie putt on the final hole.

The episode led to golf fans branding him a 'big baby', while he was also mercilessly mocked by influencer Paige Spiranac, who sarcastically praised his courage. And it seems that his efforts to make light of the matter have gone almost as badly as his original fairway walk at Rich Harvest Farms.

The @pgamemes instagram account posted a video of DeChambeau, 29, staging a scene where he seeks revenge on course ropes. Firing himself up, he then successfully ducks under one before releasing pumped up screams, whilst a group of spectators celebrate wildly with him.

Whilst the video was designed to amuse, it seemed to have the opposite effect, with fans and players – Lowry included – finding it painful viewing. "Not sure what’s worse, this or tomorrow’s Dunhill Links weather forecast," he tweeted, shortly after finishing his first round in St Andrews on Thursday.

Thomas, who like the Irishman has been a vociferous critic of LIV Golf and opposed defectors returning to play in PGA events, had little hesitation in clarifying his stance: "I vote the first!" he replied.

Is Bryson DeChambeau the most despised man in golf? Let us know in the comments section.

DeChambeau is yet to win an event since his high-profile defection, which ironically came at the same time Brooks Koepka made his own big money move. The pair had a notorious long running feud, with DeChambeau at one tournament video-bombing his bitter rival before the pair made up at the 2021 Ryder Cup.

But for all the heat the 2020 US Open champion is currently getting for his on-course mishap, he can at least be content away from the fairways. He's reportedly dating Marian University beauty Lilia Schneider, who herself has been dubbed the 'next Paige Spiranac'.