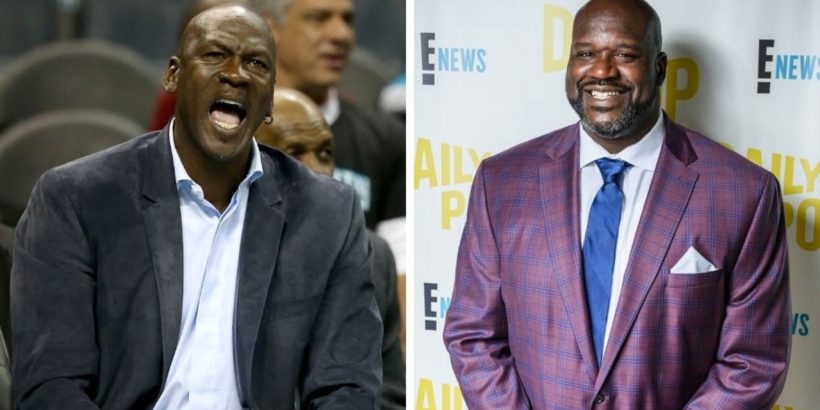 The No. 23 welded on the front gates of Michael Jordan’s Chicago mansion made sense when he was pulling into the drive while playing with the Bulls in the 1990s.

Same with the 5m-wide circular bed, complete with a bedspread showing the Superman logo, Shaquille O’Neal stretched his giant frame over inside his central Florida estate while he played with the Orlando Magic.

But to buyers expected to fork out around $20 million to purchase these properties today? Not so much.

It might be why Jordan’s Highland Park estate in Illinois has been on the market for nine years.

Michael Jordan and Shaquille O’Neal purchased their homes in the early 1990s while they were playing for the Bulls and the Magic, respectively. (Photo by Andrew D. Bernstein/NBAE via Getty Images)Source:Getty Images

Jordan initially listed the seven-acre home in 2012 for a whopping $37 million. But without any offers, the nine-bedroom, 16-bathroom abode is now up for grabs for $19 million.

O’Neal appears determined to avoid the same fate after first listing his property near Orlando in Windermere in 2018.

To sweeten the deal for a new owner, the 30,000-plus-square-foot spread the former Magic and Lakers centre purchased for $5 million in 1993 has undergone a redesign — one that’s noticeably missing its previous unique touches.

So O’Neal has replaced it with a regular-shaped one. Picture: Christian Pestana RodriguezSource:Supplied

In January, the 216cm O’Neal had a sale pending for the mansion, but the deal reportedly soon fell through for unclear reasons, according to the Orlando Business Journal.

At that time, Shaq’s own mark on the mansion was immediately apparent — with several references to the long list of nicknames he adopted during his 19-year career.

As well as the Superman bed, there was a built-into-the-wall fish tank that was surrounded by a mural of O’Neal himself driving a truck.

The truck was also emblazoned with the Superman logo and Diesel, another of his monikers.

The fish tank appears to have been taken out, though the mural remains. Picture: Uneek Luxury Tours/Danial NatoliSource:Supplied

But after three years of failed sales and price drops, the home has undergone a renovation.

The master suite is staged with a regular-shaped bed with single-coloured linens. That fish tank appears to have been removed from the wall, with just the mural of Shaq driving the truck remaining.

The kitchen now has a fresh coat of a more subtle white paint hue. These, and other interior and exterior cosmetic and new-staging upgrades, appear to give a nod to luxury home buyers — who can eye plainer-looking design to visualise their own customisations.

Located in a gated community, the mansion is still quite packed with over-the-top amenities. The two-storey great room measures 1170 square feet alone, and has a marble fireplace and glass walls.

There’s a soundproof home theatre — which has also been stripped of its Superman decorations — with a bar area. There’s even a temperature-controlled, walk-in cigar humidor with wine storage and a 17-plus car garage that’s modelled to look like a showroom.

Outside, there’s a 95-foot-long, 15-foot-deep pool with a custom rock waterfall, plus a Tiki-style cabana that overlooks Lake Butler, on which the 3.94-acre grounds have 700 feet of frontage. O’Neal is now asking $22 million.

Outside, there’s a 95-foot-long pool — one of the mansion’s many over-the-top extras. Picture: Christian Pestana RodriguezSource:Supplied

Perhaps Jordan will take note. His Airness has not budged on a new price since it hit $19 million in 2015.

Even after last year’s hit ESPN documentary series about Jordan, “The Last Dance,” no offers have been made on the house.

The home is beyond reminiscent of Jordan, due to the level of customisation that is present throughout. As well as the iconic gates the home includes a full-size indoor basketball court and a fitness centre.

It must be confusing for the postman when he arrives at 2700 Point Lane, Highland Park. Picture: realtor.comSource:Supplied

The mansion has its own fitness centre. Picture: realtor.comSource:Supplied

Jordan’s net worth is estimated at $1.6 billion and O’Neal’s is believed to be around $400 million, so these sales aren’t going to make or break their bank accounts.