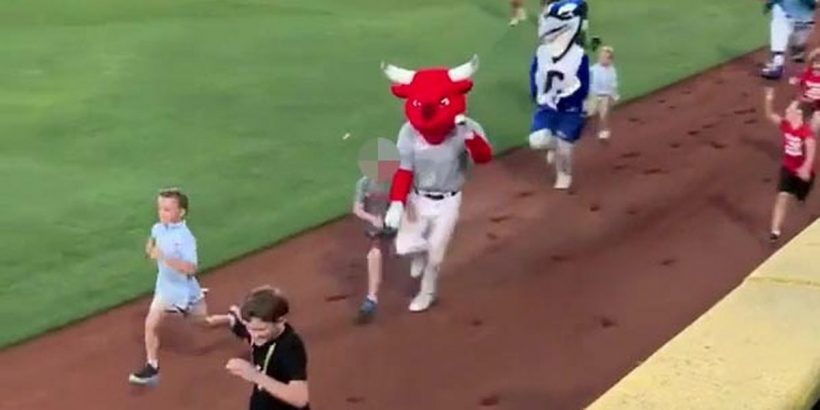 A bull mascot shoved over a small child when competing in a race at the NCAA Men's College World Series, Charles Schwab Field, Nebraska, USA.

The baseball series takes place over a couple of weeks, from June 16 to June 27. And as part of entertainment for the crowd, a group of children raced against mascots from various teams playing.

Durango, a red bull representing the University of Nebraska Omaha Mavericks, was attempting to catch up to the front of the race. A small child stepped across the bull, only to find themselves bouncing to the floor in the collision.

READ MORE:Baseball umpire needs treatment after broken bat flies off and hits him in face

There was no sympathy shown by another mascot as the Creighton University Bluejay quickly jumped over the child like a hurdle.

To be fair to the Bluejay, he didn't really have any other options than to impersonate a 100m hurdler with the collision happening just in front of him. But the jump made quite the visual.

The small child was quickly helped up to their feet by another adult further back in the race.

When is 'win at all costs' too far? Let us know in the comments section below.

Undeterred by the body check, once the child was back on his feet he dusted himself off and sprinted to the finish line with the adults who had helped him up.

The child was even able to beat the mascot that had been sweeping up the field from the back.