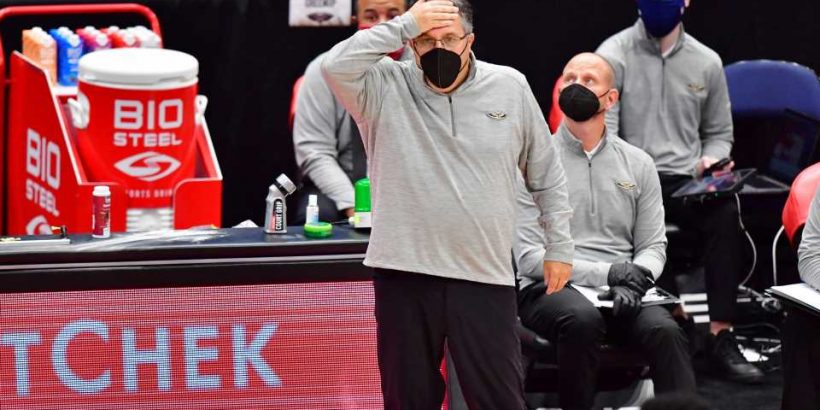 Stan Van Gundy was not a happy camper after the Pelicans’ loss to the Knicks on Sunday — and that’s putting it mildly.

With 7.8 seconds remaining in regulation, New Orleans held a three-point lead over New York, so Van Gundy instructed his team to foul in order to shut down any opportunity for the Knicks to tie the game. Instead, the Pelicans had a complete mental breakdown.

Eric Bledsoe failed to foul Derrick Rose as he drove into the paint, and Lonzo Ball helped off Reggie Bullock, a career 38.8 percent 3-point shooter. Rose hit Bullock in the corner for a great look, and Bullock drained the triple.

Ball found Bledsoe on the ensuing possession for a potential buzzer-beater, but Rose partially blocked Bledsoe’s shot, sending the game to overtime. The Knicks then outscored the Pelicans 19-9 in the extra frame on their way to a 122-112 victory.

“I thought we fought hard. We were right there, and all you’ve got to do is execute for 7.8 seconds,” Van Gundy said. “You’re just supposed to come out of the timeout, do what we’re supposed to do and put the game away, and we don’t do it.”

Bledsoe admitted that he should have fouled Rose but didn’t because of a “lack of focus.” Van Gundy indicated that attention to detail has been an ongoing problem for this group.

“We’re good enough to compete with people, but we don’t do the things at the end of games it takes to win,” Van Gundy said. “Part of that’s a learning experience, but today, no excuse whatsoever today. None. None. I don’t care if you’re a senior in high school. You can execute what we were supposed to be doing with 7.8 seconds to go. So, no excuse whatsoever.”

Van Gundy added that he wanted the Pelicans to handle the situation the same way they did earlier this season against the Celtics. In that contest, New Orleans similarly held a three-point advantage with less than 10 seconds on the clock. Josh Hart fouled Jayson Tatum as soon as he dribbled the ball, and Tatum went on to miss two free throws. The Pelicans won 120-115.

“Making plays is one thing. That’s not easy to do against good defense. It’s not,” Van Gundy said. “So that’s one thing, and I take responsibility for a lot of that when I don’t think I find the right stuff for us to do. . . . Today, [it was] simple. High school guys could have executed down the stretch. The 7.8 seconds, high school guys could have done what they were supposed to do.”

The Pelicans dropped to 25-32 with the loss. They are now three games back of the Spurs for the final spot in the Western Conference play-in tournament.