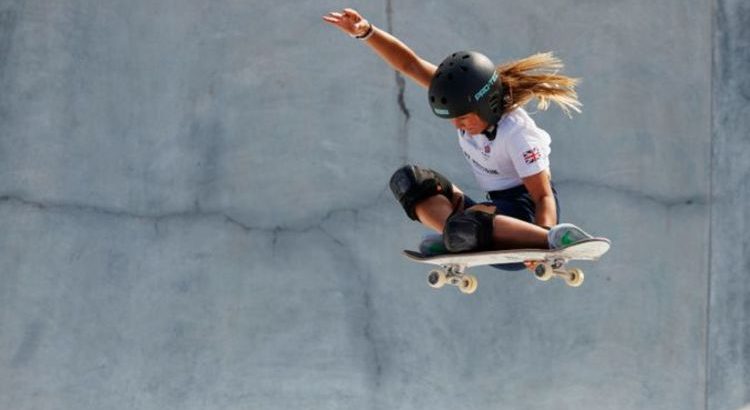 Team GB skateboarder Sky Brown has opened up on the horrific crash she suffered last year which left her parents fearing for her life. Brown, aged just 13 years and 23 days, is the youngest member of Team GB, and competes in the skateboarding park event on Wednesday at the Ariake Urban Park.

Just being at the Tokyo 2020 Olympics is a huge achievement for the laid-back teenager, given that just over a year ago she was lying unconscious in intensive care with serious lacerations to her stomach and lungs, several broken fingers and her skull fractured in multiple places.

Her father Stuart was filming when the accident happened, and unsurprisingly after she miraculously recovered, did not want his daughter to continue with the sport that had almost killed her so prematurely. He has since admitted that he really feared losing her that evening.

Brown said: “After what happened mum and dad both wanted me to stop, I think it affected them more than me, I was knocked out and don’t really remember it, they had to watch it happen- that must be really tough for a parent.

“They were so scared, they were crying every day and didn’t want me to do it anymore but skateboarding is how I express myself, it’s my life.”

Despite her age, Brown already possesses a remarkable wisdom and determination that drove her to continue with the sport.

Brown added: “I think the message is you can fall but you can also get up. Bad things can happen but good things usually happen after them, what doesn’t kill you makes you stronger.

“I like being an example, that makes me proud, it makes me more proud than any medal or any win does.

“If someone is seeing this tiny girl doing the highest trick, perhaps they can realise they could do anything too. When people tell you that you can’t do anything, that is just a chance to prove that they are wrong.”

Even prior to the Olympics, Brown is a superstar and celebrity in her own right with over a million Instagram followers, a world championships bronze medal and an X Games win.

The crash has also given her another perspective on life, particularly with regards to what the future could hold for someone so well-known at such a young age. Brown remarked: “I don’t know what the future holds, having the accident shows you can’t plan for anything. I’d like to be dancing and singing more, maybe trying some new sports. I really want to travel too.”