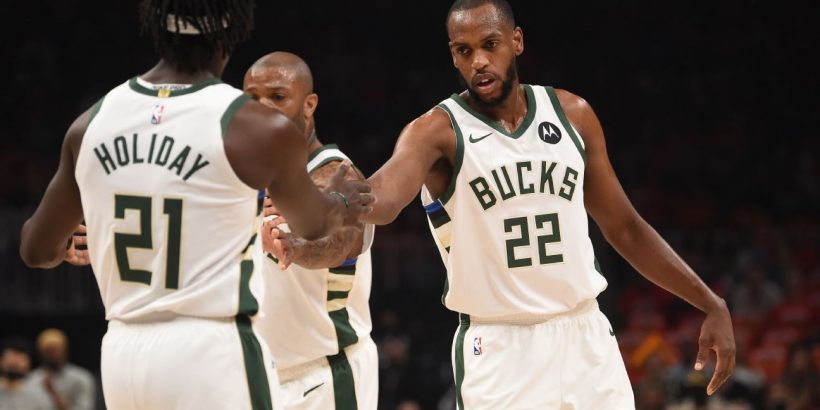 For Khris Middleton, the first half of the biggest game of his life was a terror. Careless and indecisive, he fumbled his way through the first 24 minutes of Game 6 of the Eastern Conference Finals — 6 turnovers against only 2 field goals. The Bucks’ best shotmaker wasn’t hitting shots on a night he was desperately needed as Giannis Antetokounmpo remained on the sideline nursing an injury.

Jrue Holiday fared only slightly better in the first half. Acquired from the New Orleans Pelicans for a trove of draft picks and guards Eric Bledsoe and George Hill, Holiday was to be an upgrade on Bledsoe — a veteran point guard with the poise to guide a contender through the minefield of the NBA postseason. But on Saturday, Holiday racked up five turnovers of his own before halftime, and continued his postseason struggles from the field, including a 1-for-5 clip from beyond the arc.

Whatever plagued Milwaukee’s two healthy stars in the first half quickly receded in the third quarter. A self-creator with the potential to explode if he finds his rhythm, Middleton instantly ignited a Bucks run. He scored 16 points in less than four minutes, culminating in a 3-pointer generated off a high screen from P.J. Tucker that drew Trae Young on a switch. Almost single-handedly, Middleton stretched a 4-point halftime lead to 16 points. He scored 23 points in the third quarter, the third-most in any playoff quarter over the last 25 years, and finished with a game-high 32.

Holiday also discovered his stroke from the outside in the third quarter and intensified his aggressiveness off the bounce. His penetration opened up the floor for Middleton and the rest of the Bucks’ shooters. His driving layups in the closing minutes stemmed a furious late run by the Hawks. In the thick of a tense close-out game, both Middleton and Holiday projected the quiet and confident leadership each has cultivated over time.