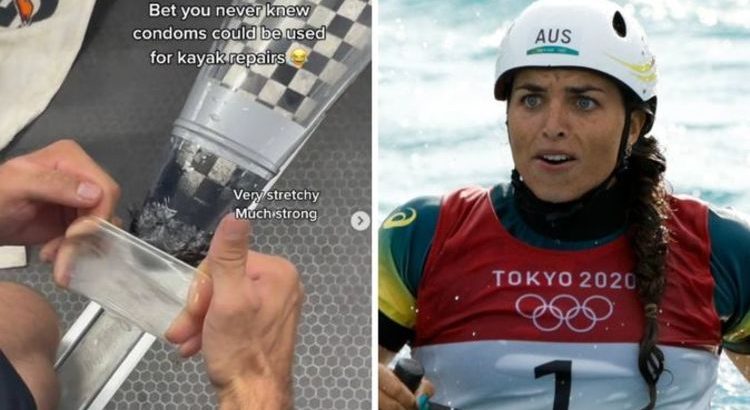 Athletes in the Olympics village are given condoms at every Games, with 160,000 being issued for Tokyo 2020. But with a ‘sex ban’ in place at the Olympics, athletes have been urged to not use them in Japan due to the coronavirus pandemic. Australian kayaker Jessica Fox though found a unique use for hers.

The Olympian was competing in the Canoe Slalom K1 event when she realised her boat was in need of repair ahead of the final.

And she shared a clip on TikTok showing exactly how she managed to fix her kayak with an innovative method.

Fox, who was the favourite to win gold in the K1, used one of the Olympic-issued condoms to repair her boat.

The footage showes a member of the Australian team applying a carbon mixture to the nose of Fox’s kayak, before a condom is placed over the top.

“Bet you never knew condoms could be used for kayak repairs,” she wrote in a caption on the video.

“It gives the carbon a smooth finish!”

And it clearly worked as Fox went on to claim bronze in the K1 final.

But there was more good news for Fox later in the week as she clinched her first ever Olympic gold in the C1 final.

The 27-year-old had won three Olympic medals previously with Fox desperate to add a gold to her tally.

“To come back after that was extremely hard, it was emotionally and mentally taxing. I’m so proud I was able to pull that run out,” Fox told AAP.

“I was dreaming of it. I really believed it was all within me, that I could do it.

“You never know what’s going to happen in the Olympics and it’s about holding your nerve. I probably didn’t do that in the kayak.”