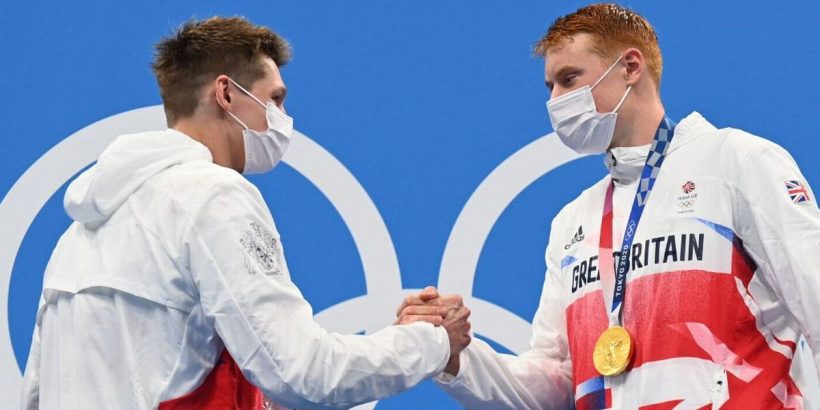 Tom Dean and Duncan Scott have made Team GB Olympics history after finishing first and second respectively in the 200m freestyle.

It is the first time since 1908 that two male British swimmers have finished on the Olympic podium together.

Dean had struggled over the past 18 months having twice contracted coronavirus, though arrived in Tokyo as the second-fastest man this year behind world No.1 Scott.

"I knew it was going to be a dog fight," Dean told BBC Sport. "I didn't know how people were going to swim it. It was just race to race.

"Thanks so much to everyone back home – my mum, my family, my girlfriend. All the boys back in Maidenhead – thank you for staying up."

Fernando Scheffer of Brazil claimed bronze with Scott insisting the result should not be a surprise.

"Yesterday was about trying to move on from the heats," he said. "It was a difficult back-to-back the evening heats and the morning semi.

"We got through the rounds really well, we navigated it well and we weren't really too surprised by yesterday morning because that's just the way me and Dean do our business.

Where will Team GB finish in the medal table? Let us know your thoughts in the comments section below

"We were satisfied with our place and it was always going to be a tough race this morning. A one-two is the best possible outcome for us so we're buzzing about that."

Dean held his head in disbelief after realising what he had achieved before celebrating wildly in the pool.

"It's a dream come true," he told Eurosport.

"But at the same time knowing how strong GB has been in the event the last four or five years it's kind of not a surprise.