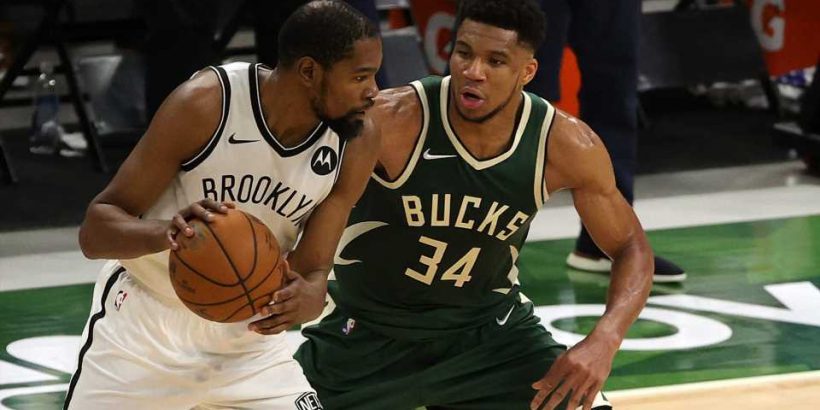 Any discussion around the best power forward in the NBA starts with Giannis Antetokounmpo and Kevin Durant. After that, things get interesting.

Where does Julius Randle fall after a tough postseason? Can Pascal Siakam or Kristaps Porzingis take their game to the next level? Is there a breakout season on the cards for rising talents like Jaren Jackson Jr. or Rui Hachimura?

Ranking all 30 starters was not an easy exercise but we’ve given it our best shot. Take a look.

In a league where so much emphasis is placed on getting the job done in the postseason, it feels impossible to place anyone other than Antetokounmpo in the top slot.

Antetokounmpo delivered another MVP caliber regular season but was not to be considered on the basis his Milwaukee squad had failed in back-to-back postseasons.

Yeah, I think he deserves this ranking.

Durant was nothing short of spectacular in his return from an 18-month absence after rupturing his Achilles in the 2019 NBA Finals.

Durant took it to the next level in the playoffs, pouring in 34.3 points per game on .514/.402/.871 shooting splits, almost dragging the Nets into the Conference Finals before dropping an epic Game 7 to the Bucks in overtime.

Rather than rest his body in a shortened offseason, Durant jumped on a flight to Tokyo to lead Team USA to the Gold Medal.

The biggest question mark over Davis is his ability to stay healthy. Unfortunately for AD and the Lakers, it was a groin strain that limited his output in a first-round loss to the Phoenix Suns.

Davis is a superstar and his best elevates him near the levels of the top two, we just haven’t seen it for long enough. On an aging Lakers roster, the 28-year-old Davis needs to play a lead role if they are once again going to make the trek to the NBA Finals.

NBA media day provided a shock, with the news Williamson could potentially miss the start of the regular season after offseason foot surgery.

Any injury to the lower extremities for a player of Williamson’s size is cause for concern, with the explosive power forward an unstoppable offensive force at his high-flying best.

Entering his third season, Williamson is as damaging as advertised on offense averaging 27.0 points per game on 61.1 percent shooting from the field in 2020-21.

Narrowly missing All-NBA selection, he did pick up his first All-Star nod. Not bad for his second year in the NBA.

The Celtics find themselves in a weird spot. Reaching the Conference Finals in two of his first three seasons in the league, Boston has seemingly taken a step back into the pack as the dynamic forward enters his fifth season with the franchise.

Tatum averaged a career-high 26.4 points per game last regular season before bumping that mark up to 30.6 in the first round of the postseason.

An elite scorer on all three levels, it remains to be seen if Tatum can carry his team to the NBA Finals.

The band is getting back together.

Green, Stephen Curry and Klay Thompson are hoping to hit the floor together for the first time since the 2019 NBA Finals at some stage this regular season.

Green is at his best when motivated. With the Warriors sniffing a return to the postseason, I expect Green to be back to his versatile best as he feeds off the superstar duo.

One of the most dynamic big men in the league with his ability to score in a variety of ways and facilitate, it feels like he will continue to go under the radar as the Pacers remain stuck in the middle of the pack in the Eastern Conference.

Sabonis averaged career highs in scoring (20.3 points per game) and assists (6.7 per game), while also hitting 32 percent of his 2.6 3-point attempts per game. That percentage in itself isn’t all that impressive, but it was the first season he jacked up more than two long-range attempts since his rookie season in Oklahoma City.

A breakout regular season was unfortunately overshadowed by a disappointing playoff performance for Randle, as the Knicks were bundled out in the first round by Atlanta.

A first-time All-Star, Second Team All-NBA and Most Improved Player award was quite the haul in 2020-21, now the next step is getting it done in the playoffs for success-starved Knicks fans.

The plateau has hit Siakam over the last two seasons with hopes that he would comfortably take the No. 1 mantle after Kawhi Leonard left for LA.

Siakam is still a dynamic defender and a force in transition who averaged over 20 points per game last season. Perhaps a bounce back is in the cards after a difficult year being relocated to Tampa Bay.

With Kyle Lowry no longer in Toronto, the opportunity remains for Siakam to return to an All-Star level of play.

It was an interesting season for John Collins, with the Hawks loading up in free agency right as the athletic big man was looking to cash in on a contract extension.

While his numbers and minutes took a hit, Collins still started in all 63 regular season appearances and ultimately inked a five-year, $125 million deal.

The Hawks need a true second star next to Trae Young to go to the next level. At just 24 years old with the pressure of a looming contract out of the way, could Collins be the guy?