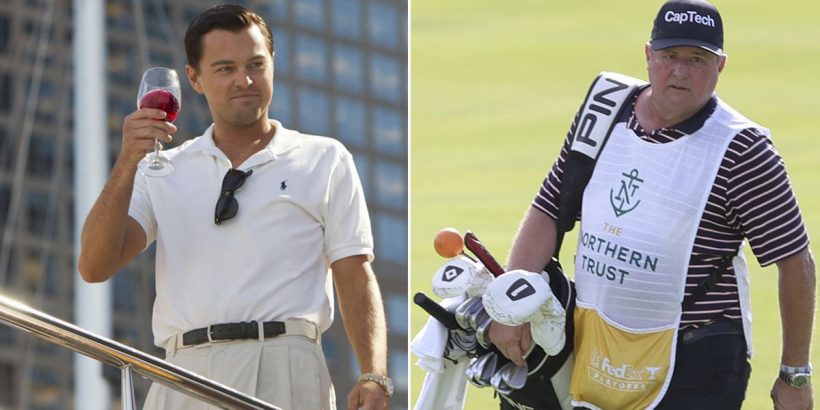 Team USA rookie Harris English heads to Whistling Straits this week for his very first Ryder Cup appearance, however it is his caddie Eric Larson who is stealing plenty of the headlines after his astonishing past was uncovered.

Ahead of the Ryder Cup, it has been revealed that Larson had previously spent ten years locked up in prison, after he was arrested in 2005 for dealing cocaine across state lines.

Larson was then sentenced to 13 years behind bars – but only served 10 – while he was fined £20,000 and ordered to serve five years probation following his release.

What’s more, the now Ryder Cup caddie spent his jail time with one of America’s most recognised criminals in Jordan Belfort – also known as the ‘Wolf of Wall Street’ – whose remarkable story was told in the 2013 blockbuster by the same name, where Belfort was played by Oscar winning actor Leonardo DiCaprio.

Furthermore, Belfort was not the only famous face Larson became equated to during his prison time, as the caddie also struck up a friendship with comedian Tommy Chong, who rose to fame in the 1980’s as part of ‘Cheech and Chong’.

So much so the pair even appeared on a number of chat shows together following their releases, where Chong revealed his jail friend Larson played a huge role during his sentence, adding that he was the reason he survived his nine months behind bars.

Despite his 13-year sentence, the caddie more than made the most of his time behind bars as he earned himself a degree in business management whilst serving his 10 years.

Larson revealed that after ending his pursuit to become a professional golfer, his job as a caddie failed to earn him enough money which resulted in him turning to drug dealing.

What do you make of Eric Larson's astonishing story? Let us know in the comments section.

Speaking about his past he said: “I did it for monetary purposes only. I didn’t use it, and I never brought it out on Tour. Was I a major drug dealer? No. Did I drive fancy cars? No.

“That doesn’t make it any better. I violated the law and I deserved to be penalised.

“But I obviously wasn’t happy with the sentence I got, I just wish it could have been less time so I could have gotten on with my life.”

The 60-year-old also commented on just how much he was looking forward to caddying in this week’s Ryder Cup in Wisconsin, and admitted he had even thought about documenting his rollercoaster journey in a book.

He added: “It’s the ultimate dream for me to caddie at a Ryder Cup in Wisconsin not far from where I grew up. It has been an interesting life, and I’ve thought about writing a book. But who in the hell wants to read a book about a guy who's been to prison?”

Despite his tarnished past record, his boss English revealed he had nothing but respect for his man on the bag ahead of his Team USA debut.

English said: “I respect his story. Eric could have gone two different ways after going what he went through, and he chose probably the hardest way.

“That was to pick himself up and keep going and make himself something. He has obviously been through a lot in his life.”