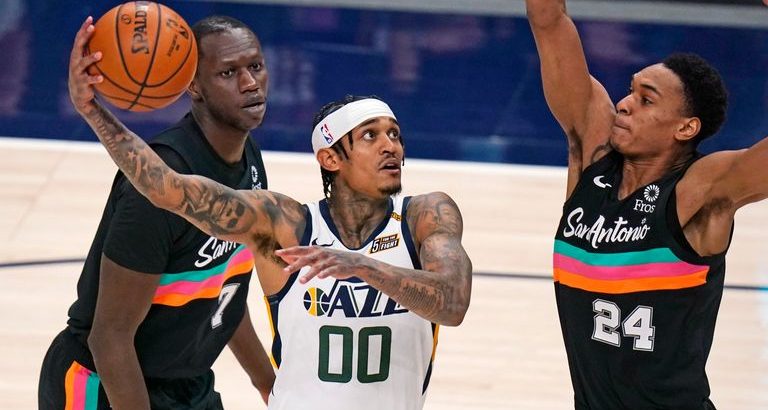 Utah Jazz leapfrogged the Phoenix Suns to take control of the Western Conference after the pair endured differing fortunes on Wednesday night, while the Philadelphia 76ers beat Houston Rockets to do likewise in the East.

Jordan Clarkson scored 30 points and Bojan Bogdanovic chipped in with 24 as the Utah Jazz crushed the San Antonio Spurs 126-94 on Wednesday for a third consecutive win.

Combined with the Atlanta Hawks’ 135-103 win over the Phoenix Suns, Utah regained first place in the Western Conference and the top record in the NBA.

The Jazz (48-18) – who were without injured All-Star guards Donovan Mitchell and Mike Conley – are now up a game on the Suns (47-19) with six games remaining in the regular season.

San Antonio (31-34) remain in the No10 spot in the West, in the final position to make the NBA’s new play-in tournament.

Luka Samanic scored a team-high 15 points for the Spurs, who only shot 40.2 percent from the floor.

In comparison the Jazz shot a blistering 55.7 percent of their field-goal attempts and hit 18 of 41 (43.9 percent) from 3-point range en route to their second straight double-digit home win over San Antonio in three days.

The Atlanta Hawks’ reserves, sparked by 16 points apiece from Lou Williams and Danilo Gallinari, overpowered the visiting Phoenix Suns in the fourth quarter and ran away with a 135-103 victory that halted Phoenix’s five-game winning streak.

The Hawks, with the second unit on the floor, scored the first 16 points of the fourth quarter and took a 25-point lead when Onyeka Okongwu slammed home an alley-oop pass from Williams to make it 113-88.

Atlanta’s backups, who totalled 74 points, didn’t allow Phoenix to score their first field goal in the fourth quarter until 2:33 was left in the game.

Devin Booker led Phoenix (47-19) with 30 points, meaning he has had 30 or more in six of his last seven games. Mikal Bridges added 18 points as the Suns lost ground on Utah in the battle for top seed status.

Joel Embiid posted his 29th double-double as the Philadelphia 76ers extended their winning streak to six games with a 135-115 road victory over the short-handed Houston Rockets.

Embiid paired 34 points with 12 rebounds to pace an efficient offensive effort for the 76ers, who shot 53.2 percent from the floor, including 15 of 35 from 3-point range.

Philadelphia (45-21) added 20-for-22 free-throw shooting in establishing and maintaining a double-digit effort against the Rockets (16-50), who produced a spirited performance despite participating with a seven-player rotation.

Shake Milton scored 19 points off the Philadelphia bench. Tobias Harris added 15 points while the 76ers’ starting back-court of Ben Simmons and Seth Curry combined for 21 points on 9-of-17 shooting, six rebounds and five assists while logging 24 and 22 minutes, respectively.

Philadelphia swept the season series with Houston for the first time since 2010-11 and now hold a two-game lead over Brooklyn at the top of the Eastern Conference.

Jrue Holiday recorded 29 points, six assists and five rebounds to help the Milwaukee Bucks post a 135-134 victory over the visiting Washington Wizards – their eighth successive victory over the Wizards.

Giannis Antetokounmpo added 23 points, nine rebounds and eight assists as the Bucks (42-24) won their fourth consecutive game and are just one game behind Brooklyn and three behind Philadelphia in the battle for the top seed in the Eastern Conference.

Bradley Beal scored 42 points for Washington (30-36), who lost for just the fourth time in the past 17 games and missed the chance to tighten their grip on the tenth and final place in the play-in competition.

Westbrook clinched his 19th triple-double in his past 23 games when he collected his 10th rebound with 6:26 left in the third quarter.

The Bucks were without Khris Middleton (knee) while Washington was missing Rui Hachimura (non-COVID illness). Milwaukee lost P.J. Tucker (jaw) shortly before the midway point of the third quarter after he collided with team-mate Jeff Teague.

Damian Lillard scored seven of his game-high 32 points in a game-breaking run in the final 2:10 of the third quarter, propelling the Portland Trail Blazers to a 141-105 triumph over the host Cleveland Cavaliers.

The Trail Blazers (37-29) moved within a half-game of the Dallas Mavericks (37-28) and Los Angeles Lakers (37-28) in their three-team duel for the fifth and sixth playoff spots in the Western Conference.

The team that finishes with the seventh-best record will be relegated to the NBA’s new play-in tournament.

Enes Kanter and Carmelo Anthony came off the bench to contribute double-figure scoring to an attack that featured six players with 10 or more points.

Kanter (18 points, 13 rebounds) and starting center Jusuf Nurkic (15 points, 11 rebounds) recorded double-doubles for Portland, which put up a season-high point total, six more than they’d had in any game previously.

Playing the second night of a back-to-back and having gone overtime the previous night to boot, the Cavaliers (21-45) hung within 90-80 into the final three minutes of the third period after a three-point play by Isaac Okoro.

Portland native Kevin Love paced the Cavaliers with 18 points. Dean Wade had 16 points off the bench, while starters Collin Sexton and Cedi Osman reached double figures with 15 and 14 points, respectively, for Cleveland, which lost its eighth straight game.

Kemba Walker led all scorers with 32 points in his return from injury to help the Boston Celtics move back into sixth-place with a 132-96 win over the host Orlando Magic.

Walker, who missed four games because of a left oblique strain, scored 18 of his points in the first half and reached 29 in 22 total minutes after scoring 11 straight.

Jayson Tatum scored 13 of his 27 points in the third quarter for the Celtics while Evan Fournier had 18 points in his first game back in Orlando after the Magic dealt him to Boston prior to the trade deadline.

Boston (35-31) won for the third time in four games after entering the day a half-game behind Miami for the sixth and final spot in the East that would avoid the postseason play-in round.

Mo Bamba, who set career highs in points (22) and rebounding (15) in the Magic’s win against Detroit on Monday, scored 19 and grabbed 15 boards against Boston.

Orlando (21-45) has already been eliminated from the playoff contention, but had won two straight and three of four after dropping six straight and 12 of 13.

Nikola Jokic had 32 points and 12 rebounds, Austin Rivers tied his season-high with 25 points against his former team, and the host Denver Nuggets chalked up a 113-97 victory over the surging New York Knicks.

The Nuggets are level with the Los Angeles Clippers for third in the Western Conference, while the Knicks (37-29) lost for just the second time in 14 games.

Jokic outscored New York on his own in the first quarter, 24-12, and his 10 free-throw attempts were six more than the Knicks’ total.

Marvin Bagley III finished with 31 points and 12 rebounds to help the Sacramento Kings cap a perfect four-game road trip with a 104-93 victory over the host Indiana Pacers.

The Kings (29-37) won their fourth in a row since Bagley returned after missing over a month due to a fractured hand, maintaining their unlikely but still alive slim hopes of sneaking into the play-in tournament in the Western Conference.

But after the Spurs defeat to Utah on Wednesday, the Kings and San Antonio face off on Friday in a game that is crucial to Sacramento’s post-season hopes.

Sacramento cooled off the Pacers (30-35), who had averaged 146.5 points over their previous two games and were led by Domantas Sabonis who finished with 17 points, 13 rebounds and eight assists.

Indiana hold the ninth seed in the Eastern Conference, two games behind the eighth-place Charlotte Hornets.

Ja Morant scored 37 points, Desmond Bane hit a pair of clutch 3-pointers in the final minute and the Memphis Grizzlies weathered 42 points from Anthony Edwards to hold off the Minnesota Timberwolves and win 139-135 in Minneapolis.,

Memphis (33-32) scored 73 first-half points and took a 10-point lead into halftime, but Minnesota battled back on the strength of 8-of-10 shooting from 3-point range in the third quarter.

Edwards led the Timberwolves’ 19-of-39 shooting from behind the arc, going 8-of-9 himself – his only miss coming on a buzzer-beater attempt at the end of the third period. His 42 points matched a career-high.

The raucous Minnesota rally set up a back-and-forth fourth quarter that Memphis played short-handed after Grayson Allen left the game in the first half with an abdominal strain, while both Jonas Valanciunas and Dillon Brooks fouled out in the final period.

Want to watch even more of the NBA and WNBA but don’t have Sky Sports? Get the Sky Sports Action and Arena pack here