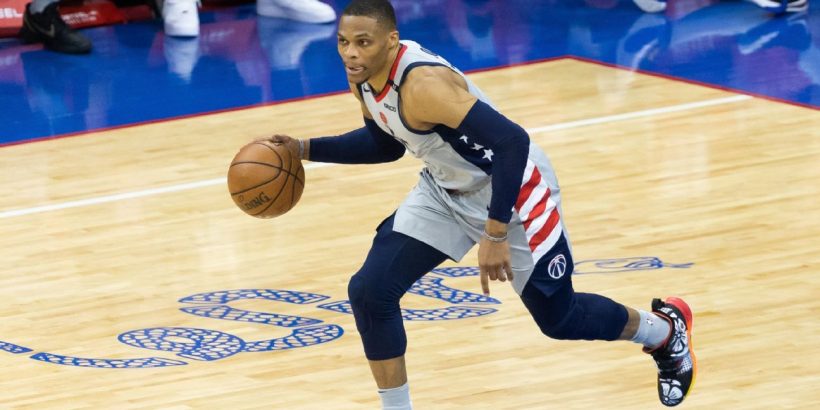 SO MUCH OF the NBA’s history from the past two decades collides in the Los Angeles Lakers’ audacious pairing of Russell Westbrook with LeBron James and Anthony Davis — yearslong debates swirling together, the most polarizing MVP in recent memory, truisms that have hardened over time to be tested anew.

The first is one of the great James axioms: If he’s the best shooter on the floor, you haven’t built the right team around him. The Lakers’ roster is half-constructed; they have five players, and one of them is Alfonzo McKinnie. They will probably re-sign some or most of their incumbent free agents, only because trading three players for Westbrook leaves them few other choices.

Some of those guys — Alex Caruso, Wesley Matthews, Markieff Morris — are solid 3-point shooters at varying volumes. Another — Talen Horton-Tucker — is young and fearless enough to expect improvement.

The free agencies of Caruso and Horton-Tucker (a restricted free agent) will be interesting. Both will have multiple suitors, sources said. With limited cap room leaguewide, the full midlevel exception — worth about $10 million — will be a powerful tool. Some agents and team executives expect a climate in which teams might offer all or most of the midlevel at the starting gun and demand a quick answer. If some rival does that with Caruso, will the Lakers match or exceed it right away? If they haggle, will it cost them?

The Lakers are heading toward at least testing that James shooting axiom with closing lineups centered around the James/Davis/Westbrook trio. Some of those lineups may even include a rim-tethered center in the mold of Dwight Howard, JaVale McGee, and Andre Drummond — the latter another incumbent free agent. The Lakers can offer Drummond a little more than the veterans minimum, or dip into their taxpayer midlevel exception — a chip they should probably use on a shooter instead.

The Lakers leaned on smaller Davis-at-center lineups during their run to the 2020 championship when the Houston Rockets and then the Miami Heat (briefly) threatened them. Some featured a shaky-shooting point guard in Rajon Rondo. This is a familiar, title-winning formula.

But Westbrook is different — a non-shooting point guard who shoots a lot. His introduction may require the Lakers to lean even further toward the Davis-at-center construct. And so one of those other roiling, decadelong storylines rumbles again: How willing are James and Davis to slide down from their preferred positions?