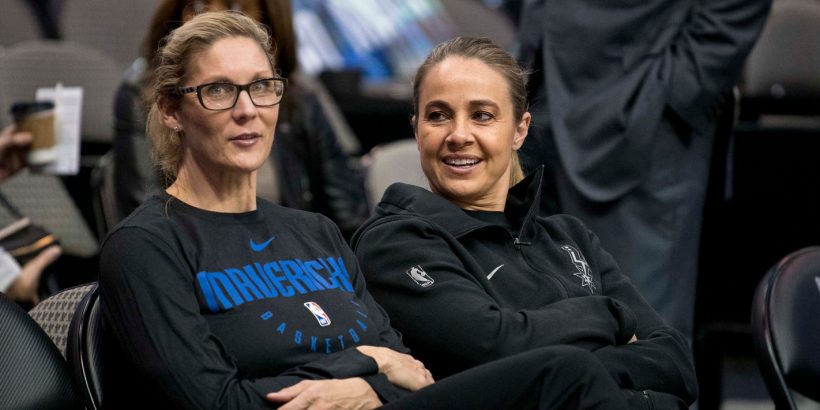 The WNBA tipped off its inaugural season with a three-game schedule nearly 24 years ago.

On that day, about 90 minutes before the Cleveland Rockers hosted the Houston Comets in a matchup featuring three future hall of famer players, reserve guard Jenny Boucek, who overcame daunting odds and made the team during an open tryout, summarized her emotions about what was about to transpire.

“I can’t imagine that there will be a more exciting day, maybe my wedding day,” said Boucek on June 21, 1997, from just outside her Gund Arena locker room. “I’m just going to try to soak it all in.”

Fast forward nearly a quarter of a century and Boucek is thriving in the NBA as one of the league’s eight female assistant coaches.  It's fitting that during Women's History Month, we look at the future of women in the NBA, and that future is bright.

HOW IT HAPPENED: GM who drafted Durant, Harden and Westbrook has 18 first-round picks in next seven years

WORK TO DO: What will it take for NBA to increase number of Black head coaches?

They cite a variety of reasons for the instant connection.

“This is a generation of players raised predominantly by women and a lot of times, single women, strong women,” Boucek told USA TODAY Sports. “They haven’t blinked an eye since day one.”

“If you can help them do that, they are really, really receptive to it. It’s a generation growing up with women’s basketball everywhere. Every guy on this team, they have friends who play in the women’s game.”

According to Raman, players just want to get better, whether the tutelage emanates from a man or women.

“If you can help them do that, they are really, really receptive to it,” Raman told USA TODAY Sports. “It’s a generation growing up with women’s basketball everywhere. Every guy on this team, they have friends who play in the women’s game.”

Gottlieb agrees, telling USA TODAY Sports, that, “the qualities that they want in their coaches transcend gender. They want to be pushed and made better.”

With so many women assistants now part of the NBA landscape, the next big question is when will an NBA team hire a woman as its head coach?

“It’s right in front of us. It’s going to happen,” basketball pioneer Nancy Lieberman, who was the first woman to coach a G League team, told USA TODAY Sports during an interview last year.

Toronto Raptors president Masai Ujiri, whose Raptors have women in key positions throughout the basketball staff, and Richard Lapchick, author of the detailed racial and gender report cards for sports leagues, have also said it’s on the horizon.

While Hammon, who started her NBA coaching career in 2014, seems to be on track to become the first female full-time NBA head coach, some of the women NBA assistants are focused on the present.

“I’m out of my comfort zone a little bit and I’m really loving that,” said Raman. “I’m more just trying to soak up as much information as I can, build relationships with everybody within the organization – with the players, and get better every day.”

“I definitely didn’t take this job as a means to a different end,” said Gottlieb.

However, Gottlieb credits this opportunity with providing women the ability to choose coaching opportunities to pursue on all levels, leading both men and women.

“Is it the NBA? My goodness, that would be amazing! Is it the WNBA? Is it men’s or women’s college?” said Gottlieb. “I think the doors are open simply because of this experience.”

The NBA’s doors are now open wider than ever for women looking to embark on a coaching career, and Raman feels that fact will be reflected in growing numbers during the next few years.

“I do think you are going to see exponential growth,” said Raman. “I don’t think internally it will be a big deal and I think that’s what progress is.”

NBA president of league operations Byron Spruell said the league in 2019 partnered with the National Basketball Coaches Association to create a deeper and more inclusive pool of coaching candidates.

Gottlieb understands this time of incredible opportunity and feels a sense of duty.

“I think it’s our responsibility to do our jobs extremely well so that people believe that women should be in the conversation in each and every search," she said. "And then choose the best person.”

“This is much bigger than us,” Weatherspoon told USA TODAY Sports. “While we are in, what are we doing to make sure that door opens completely for others to step in?”