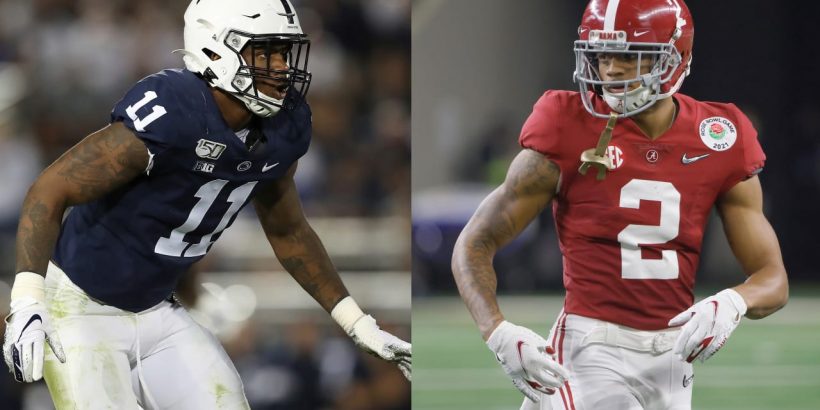 It’s finally draft month! And there’s been a lot of chatter about the quarterbacks and other offensive playmakers in the 2021 NFL Draft class. But what about the defensive guys?

They’ve been balling out during their respective pro days, so it’s time we give them some love this draft season. Today, we ask our analysts one simple question:

Who is the best defensive player in the 2021 NFL Draft?

DeAngelo Hall: Micah Parsons is the best defensive player. When you watch the way Devin White plays — and what he means to the Super Bowl champion Buccaneers — you quickly understand that an impactful three-down linebacker is something you should never overlook. Parsons has the size (6-foot-3, 246 pounds), speed (unofficial 4.39 40-yard dash at his pro day) and playmaking ability of former Defensive Player of the Year Luke Kuechly. This is the best pure, in-the-box linebacker prospect we’ve seen in years. Honestly, he could be the best pass rusher in a class without a dominant QB hunter — the Penn State product at least has the physical traits to dominate that aspect of the game.

Marc Ross: Most of the top defensive players in this draft class come with some glaring concerns. But not Patrick Surtain II. He checks all the boxes of a potential perennial Pro Bowler on and off the field: pedigree, physical talent, production and intelligence, just to name a few. It’s really hard to identify a legitimate flaw in his game, which sets the Alabama cornerback apart from the rest of the field.

Charley Casserly: Micah Parsons possesses a versatile skill set that would give him top-10 value in any draft. A very instinctive player, he can play all three linebacker spots in a 4-3 defense and inside linebacker in a 3-4. He finds the ball and gets there quickly, while also having the ability to slip blocks inside and the speed to make plays to the outside. He could have some trouble shedding blockers when engaged with an offensive lineman, and will operate best when he plays behind the defensive line. Parsons shows the speed to come off the edge as a pass rusher and effective blitzer. In coverage, he’s a very good reactor in zone defense and looks as if he’ll be able to mirror running backs and tight ends. The future is bright!

Maurice Jones-Drew: This might not be the most popular pick, but it’s the right one. The best defensive guy in this draft class is Oregon safety Jevon Holland. He’s a versatile talent who can play cornerback, nickel, safety and sub linebacker, and there’s a good chance he has the best ball skills in the draft. Holland is big, fast, strong and agile, everything you need to lay the booooom but also secure the tackle at safety. With the emergence of dominant tight ends around the league, a player like Holland has a ton of value.

Brian Baldinger: I believe Patrick Surtain II is the best defensive player going into the draft. He has a great deal of experience after playing three years at ‘Bama against the best competition every Saturday. Not to mention, he practiced daily against a fleet of top receivers (DeVonta Smith and Jaylen Waddle in this draft class, as well as 2020 first-rounders ﻿Henry Ruggs III﻿ and ﻿Jerry Jeudy﻿), honing both his man-to-man skills and zone principals. Surtain was coached by his father, who had his own 11-year NFL career, before playing under the best defensive back coach in the country in Nick Saban. That’s why he is clean, skilled and ready to immediately upgrade an NFL team’s secondary on Day 1.

Joe Thomas: Micah Parsons doesn’t think there’s a player like him in this year’s draft class. He’s right! The versatile linebacker put it all on display during Penn State’s pro day (and in weekly game film) and proved he’s the type of defender who can create game-changing plays — a huge positive for NFL defenses. There are other talented defensive guys out there, but none as good as Parsons.