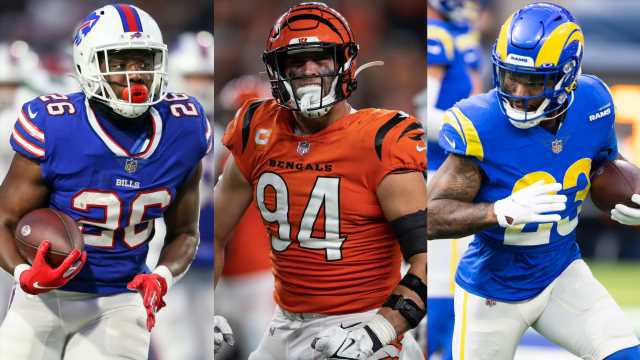 Former NFL player and scout Bucky Brooks knows the ins and outs of this league, providing keen insight in his notebook. Today’s installment is more concentrated than usual, tackling a single subject matter that looms large in the race for the Lombardi Trophy …

The NFL playoffs are about matchups and finding ways to create opportunities for dynamic players. While much of the attention will focus on unlocking the potential of each team’s marquee names, the playoff teams that advance are typically the ones that have a few lesser-heralded guys step up in big moments.

These are the X-factors, those individuals who emerge — or in the case of some well-traveled veterans, re-emerge — in the searing spotlight of the postseason. While pregame coverage revolves around the superstars, postgame analysis often sings the praises of complementary players who provided clutch contributions.

Given some time to study the full playoff field, I’ve come up with one X-factor for each of the 14 teams in the postseason tournament.

Simmons has nearly reached a point of stardom where you can no longer deem him an X-factor, but considering he was snubbed from the Pro Bowl, I wanted to shine a light on him here. The Titans’ defensive dominance at the point of attack is fueled by the third-year pro’s disruptive skills as an interior defender. The 6-foot-4, 305-pounder is a heavy-handed power player with a freakish combination of athleticism and combat skills. Considering Simmons notched 8.5 sacks as a defensive tackle, the middle of Tennessee’s defense will create problems for opponents in the tournament.

The former Pro Bowler, who came to Kansas City in a midseason trade, has infused the Chiefs’ front line with attitude, energy and pass-rush skills. Ingram’s arrival enabled Chris Jones to reprise his role as a dominant interior defender while also giving Frank Clark a capable playmate on the opposite edge. Although Ingram’s raw stats don’t pop off the page, the veteran’s presence has helped the Chiefs’ defense significantly improve over the course of the season.

Buffalo transitioned from the Josh Allen show to a more balanced rushing attack down the stretch with Singletary making key contributions. The third-year pro has averaged 19 carries and 80.8 rushing yards since Week 15, scoring six total touchdowns in the process. Clearly, Bills offensive coordinator Brian Daboll felt he needed to diversify the ground game by giving the running backs a more prominent role. Makes sense, considering this NFL Research gem: No team has ever advanced to the Super Bowl averaging fewer than 19.2 RB carries per game.

Cincinnati’s blue-collar defense has outworked opponents this season, with Trey Hendrickson and Hubbard setting the tone on the edges. While Hendrickson will certainly receive a ton of attention from opponents after racking up 27.5 sacks over the past two years, it is Hubbard’s overlooked production (7.5 sacks in 2021) that steadies a defense looking to gradually overwhelm opponents at the point of attack. If Hubbard (and Hendrickson) get it going early in games, the Bengals are capable of suffocating opponents with their relentless effort and physicality.

Credit Gus Bradley for bringing over one of his former Chargers players to direct a defense that has played great football down the stretch. Perryman is not only the Raiders’ leading tackler, but he is the alpha leader who sparks the unit with his communication skills and playmaking ability. As Bradley attempts to make the game easy for his defenders — so they can play fast and free — he needs his experienced traffic cop to control the action in the middle of the field.

The Patriots’ chameleon-like offense changes styles based on the weaknesses of their opponents. Surveying the AFC field, the rushing attack could play a prominent role in New England’s game plan, enabling the offense to control the game and complement a stingy defense. I gave Harris the spotlight love above, but he and rookie Rhamondre Stevenson are interchangeable options as power runners with size, physicality and toughness. The duo excels running between the tackles, and their collective skills as grinders could make the Patriots a formidable force with a run-heavy approach that bludgeons opponents for 60 minutes.

Yeah, Minkah’s a former first-round pick with two All-Pro nods, but I just had to include him in this file, given how crucial a role he plays. The safety is one of the most important defenders on a defense that will need to play A+ football in order for Pittsburgh to advance in the tournament. Fitzpatrick is an instinctive center fielder with a nose for the ball and enough range to cover the field from numbers to numbers. As the rare ballhawk with big-hit ability, Fitzpatrick could be huge as a pass and run defender, alternating between the deep middle and the box, based on play calling.

Green Bay’s leading tackler was one of the most egregious Pro Bowl snubs, but Packer backers certainly appreciate his skills as the silent assassin on a defense with dominant potential. Campbell has excelled as a sideline-to-sideline defender in every aspect; the former Falcons fourth-rounder not only gobbles up ball carriers (146 total tackles), but he is a sneaky quarterback hunter (two sacks and six QB hits) and ballhawk (two interceptions, two forced fumbles and a fumble recovery). If the Packers’ defense dominates throughout the tournament, No. 59 will be in the middle of the action as the primary playmaker.

The veteran defender’s return to practice comes at the right time, as Tampa’s defense needs to step up to compensate for all of the firepower lost on offense. Lining up alongside Devin White, David gives the Buccaneers another speedy defender on the second level with outstanding instincts, awareness and diagnostic skills. Eternally underrated during his decade in the league, David is a critical piece in the Buccaneers’ repeat effort.

The long-distance kicking specialist is a dangerous offensive weapon for “America’s Team,” but his inconsistency on extra points and short-range kicks could put Mike McCarthy in a bind in close games. The Cowboys’ 12 missed kicks were tied (with the Saints) for the most in the NFL this season, as Zuerlein failed to convert six field goals and six PATs. While “Greg the Leg” has a track record of nailing big kicks over his career, Dallas will need the veteran to emerge as a more dependable point scorer to advance through the postseason.

After a prolific finish to the 2020 campaign, Akers was expected to be a focal point of the Rams’ offense. A preseason Achilles injury appeared to knock him out for the season, but the second-year pro’s superhuman recovery puts him back in the rotation at the perfect time. With Matthew Stafford struggling with turnovers of late, the Rams need their electric RB1 to team with Sony Michel to give Sean McVay the balance the offense needs to set up L.A.’s veteran quarterback for success. If Akers (and Michel) are able to bang out 100-plus yards on the ground, the Rams’ offense becomes nearly impossible to defend, given the unit’s explosive star power on the perimeter.

Watt’s past his prime and hasn’t played since Week 7 due to shoulder surgery, but the three-time Defensive Player of the Year returned to practice this week and could be ready to rock on Monday night. Watt’s return would add more explosiveness to a potent pass rush that creates havoc and chaos, fueling defensive coordinator Vance Joseph’s scheme. If the energetic playmaking specialist is able to give the Cardinals 20-plus snaps on obvious passing downs, Joseph’s blitz packages could devastate opponents in the postseason tournament.

The 49ers feature one of the best defensive ends in the game in Nick Bosa, but the emergence of Key as a disruptive situational pass rusher (6.5 sacks) could create problems for opponents in the playoffs. The 6-5, 240-pounder has shown promise as an interior rusher in a creative sub-package that exploits offensive lines lacking top talent from tackle to tackle. Key’s ability to outmaneuver lumbering offensive guards destroys the timing of the passing attack and enables the 49ers to control the game with a four-man rush.

The Eagles’ sticky-fingered tight end is a crafty pass catcher with a knack for finding holes over the middle of the field. Goedert could play a huge role in the playoffs with opponents intent on taking away Philadelphia’s outside weapons (﻿DeVonta Smith and Quez Watkins) to force Jalen Hurts to throw into traffic between the hashes. The 6-5, 256-pounder is a polished route runner with receiver-like skills, and his ability to get open could be a true difference-maker in a playoff game.