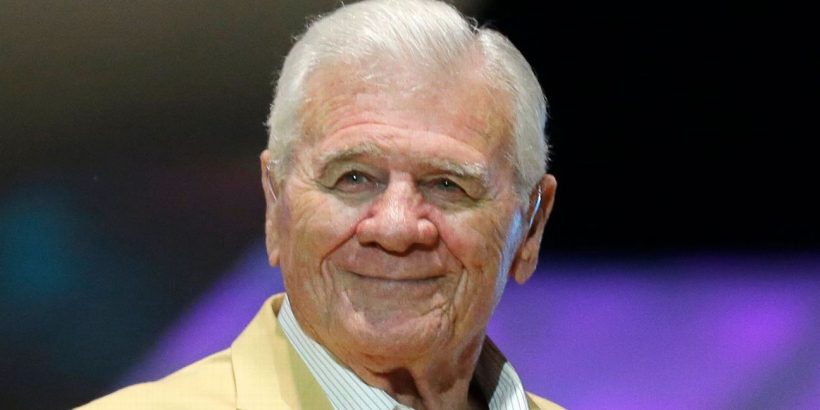 Hugh McElhenny, a member of the Pro Football Hall of Fame who used his speed and elusiveness to rise to prominence as a halfback in the 1950s, died June 17 at age 93, the Hall of Fame announced Thursday.

McElhenny died of natural causes at his home in Nevada, the Hall of Fame said.

Known for his long strides and high-knee propulsion, McElhenny rushed for 5,281 yards and 38 touchdowns in a 13-year career that included stops with the Minnesota Vikings, New York Giants and Detroit Lions. But it was his nine-year run with the San Francisco 49ers that vaulted “Hurryin’ Hugh” to football stardom.

Using a traditional T-formation, the 49ers employed the famed “Million Dollar Backfield,” which featured fullback Joe Perry, quarterback Y.A. Tittle and halfback John Henry Johnson, along with McElhenny, a six-time Pro Bowl selection who had a career-high 916 yards and eight touchdowns on the ground in 1956.

“Hugh McElhenny was a threat in all phases of the game offensively — rushing, pass receiving and as a kick and punt returner,” Pro Football Hall of Fame president Jim Porter said. “His all-around talent — obvious to pro football scouts when Hugh was still a teenager — will be celebrated and preserved forever in Canton.”

The No. 9 overall selection in the 1952 NFL draft by the 49ers out of Washington, McElhenny burst onto the professional scene, turning his first play from scrimmage into a 40-yard touchdown run. McElhenny, also known as “The King,” quickly became a top target for Tittle out of the backfield, using his 6-foot-1, 195-pound frame to weave his way through defenses off screen passes.

“There’s no question he could do everything,” former 49ers teammate Billy Wilson told the Seattle Post-Intelligencer in 2004. “He could change direction on a dime. He had great cutting ability where other backs were just slashers.”

McElhenny, a Los Angeles native, was a five-time first-team All-Pro selection and was named to the NFL’s 1950s All-Decade Team. He was a first-team All-American in 1951 with the Huskies, and his No. 39 is retired by the 49ers.

On his enshrinement day in Canton, a humbled and emotional McElhenny opened by acknowledging his teammates through the years, as well as his opponents.

“I want to pay tribute to the athletes that I played with for their second efforts which made my runs successful,” McElhenny said, “and to my opponents for all the mistakes they made to make me look good.”