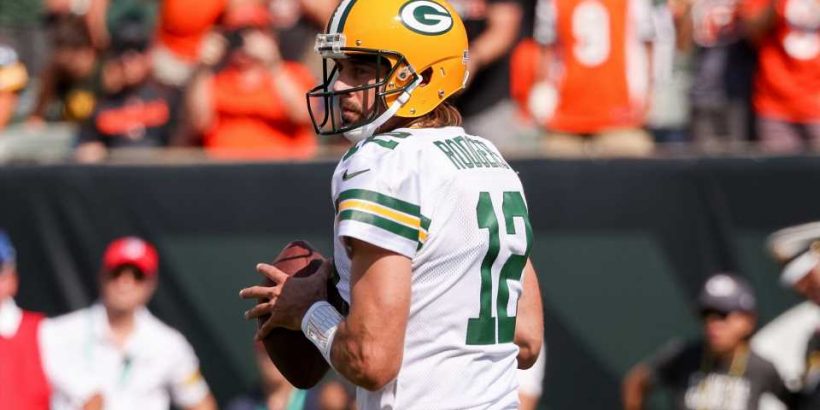 Aaron Rodgers joined “The Pat McAfee Show” on Tuesday to discuss not only the Packers’ 25-22 overtime win vs. the Bengals on Sunday, but also his opposing quarterback in the game, Joe Burrow.

Rodgers was largely complimentary of the second-year Cincinnati quarterback, who completed 26 of 38 passes for 281 yards and two touchdowns to two interceptions in the loss. But Rodgers did mention some sage advice he gave following Green Bay’s win:

“I will tell you the thing that I told him, which I’ve told other quarterbacks from time to time: Slide. Slide,” Rodgers said. “I said, ‘You’re too damn talented, you got so much in front of you to accomplish in this league, just sometimes you gotta slide.’ I would’ve told the same thing to Andrew (Luck).”

For context, former Colts quarterback Luck was known for the amount of injuries he endured in the NFL from 2012-2018. He was sacked a total of 174 times during those years. For context, he only threw 171 touchdown passes.

Burrow has only 24 rushing yards so far this season, but did have two injury scares during Sunday’s game. In the second quarter, he walked off the field after taking a hard tackle made by Packers defenders Darnell Savage and De’Vondre Campbell. Burrow ended up not having a concussion, and continued playing after a quick break.

After the game, though, Burrow was sent to the hospital with a throat contusion. It is unclear when or how the injury occurred.

Burrow’s upper body injuries prompted Rodgers to speak to the Bengals quarterback about how he could prevent them in the future. Rodgers claimed to tell this advice to various other quarterbacks in the league, too. However, the only quarterback he said probably doesn’t need to follow that advice is Lamar Jackson, who has 341 rushing yards so far in 2021.

“I don’t feel like sliding makes you less tough,” Rodgers said, “it’s just sometimes the smarter thing to do.”