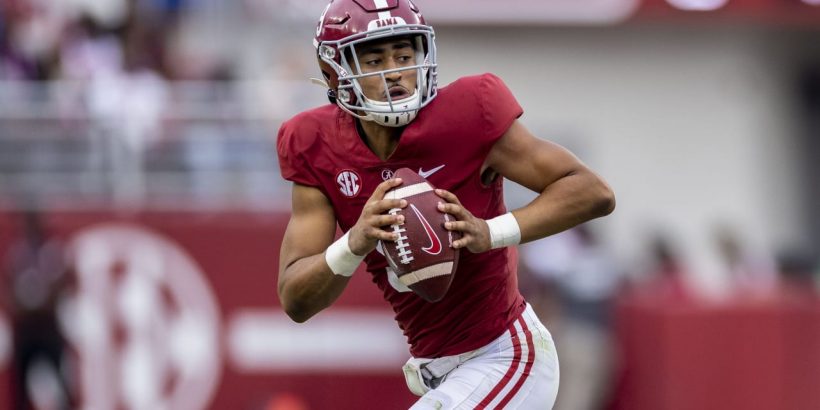 “I’ve always been labeled as someone who’s not the prototype, being an African-American quarterback and being quote-unquote undersized and not being that prototype, I’ve always been ruled out and counted out,” Young said after singling out several supporters during his acceptance speech. “People a lot of times have told me that I wasn’t going to be able to make it. And for me, it’s always been about, not really proving them wrong but proving to myself what I can accomplish. I’ve always pushed myself to work the hardest and I try my best to do all I can to maximize all that I can do. And thanks to the people around me and through the grace of God, I’ve been able to make it here, and I’m truly grateful for that.”

Young has led the Crimson Tide to a 12-1 record, a Southeastern Conference championship, and a top-seeded berth in the College Football Playoff. On the season, he’s completed 314 of 462 passes (68 percent) for 4,322 yards, 43 touchdown passes and four interceptions, while rushing for three more scores.

Among Young’s top performances were a school-record 559 passing yards with five touchdowns against Arkansas, and an SEC Championship Game record 421 yards against then-No. 1 Georgia. He struggled against rival Auburn (25 of 51) but led a 97-yard touchdown drive with under two minutes remaining to force overtime as the Crimson Tide eventually escaped with a 24-22 win. He will lead Alabama against Cincinnati on Dec. 31 in the Cotton Bowl CFP semifinal.

As a true sophomore, Young won’t be eligible for the 2022 NFL Draft. He played sparingly as a freshman (22 pass attempts), serving as a backup to current New England Patriots QB Mac Jones.

Young is the second consecutive Alabama player to win the Heisman — wide receiver DeVonta Smith, a first-round draft pick of the Philadelphia Eagles in April, won the honor last year — and is the fourth winner from the school overall. Running back Mark Ingram won the 2009 Heisman, and RB Derrick Henry took it in 2015.

Pickett led Pitt to an Atlantic Coast Conference title and is considered among the top quarterback prospects for the 2022 draft. Stroud — like Young, a first-year starter — threw 38 TD passes for the 10-2 Buckeyes, who earned a Rose Bowl berth against Utah. Hutchinson logged 13.5 sacks at defensive end to anchor a Michigan defense headed to its first CFP appearance. The Wolverines won the Big Ten title.

Voters for the trophy include 870 media members, former Heisman winners and one vote cast collectively by fans.