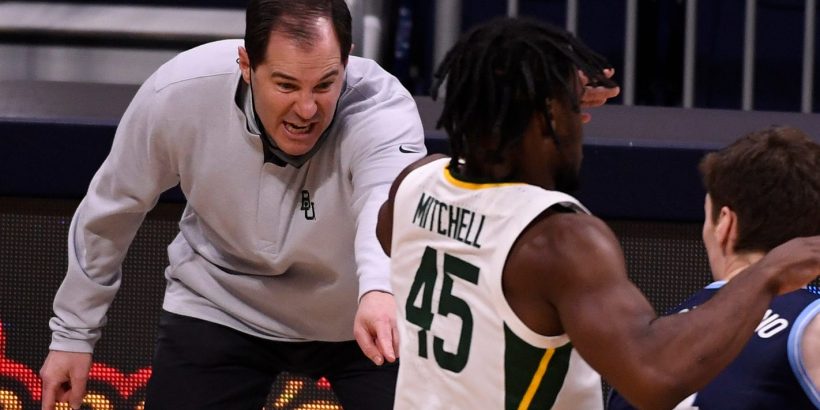 INDIANAPOLIS — Baylor coach Scott Drew revealed on Sunday that he and Gonzaga coach Mark Few have been saying prayers for each other's teams in this men's NCAA Tournament – hoping that each would reach the national championship game.

Now that the goal has been realized and No. 1-seed Baylor will meet No. 1-seed Gonzaga in the final Monday night, Drew quipped: "I guess he won’t get that prayer text before this one."

The two have become close friends over the last two years.

"Look, we've always had Baylor in the rearview mirror or whatever, in the back seat," Few told reporters. "Kind of as: 'If we're going to win this thing, we're probably, at some point, going to have to play them.' Because I always thought we were the two best teams."

The two have been out front all season, with Baylor starting as the No. 1 team in the Ferris Mowers Coaches Poll in November before Gonzaga leapfrogged the Bears several weeks into the season. Gonzaga leads KenPom in offensive efficiency and Baylor is No. 2. They were slated to meet Dec. 5 before a COVID-19 cancellation.

Fate wasn't having it then. But it's happening now – on the biggest stage. The prize will be the first national title for one coach.

Rarely in college basketball do the highest-ranked teams meet in the national championship. The single-elimination style of March Madness doesn't typically allow it. This is the first time in more than a decade there are two No. 1 NCAA Tournament seeds in the championship game, and only the fifth time since 1999.

So which one is Magic Johnson's Lakers, and which is Larry Bird's Celtics?

Undefeated Gonzaga has been the clear-cut favorite all season with Suggs – a projected lottery pick – running the point, first-team All-American Corey Kispert on the perimeter and big man Drew Timme bolstering the in-and-out game. But the Zags looked mortal in an overtime victory against UCLA in the Final Four, where it took Suggs' buzzer-beating, banked three-pointer to advance.

Baylor had two regular-season losses but found its championship form on Saturday, demolishing Houston. The Bears' nation-leading three-point shooting and dynamic guard play were on full display. First-team All-American Jared Butler is the catalyst, while national defensive player of the year Davion Mitchell is arguably the best player. MaCio Teague completes the trio of guards Drew believes to be "one of the best in college basketball history."

This long-awaited matchup has been two years in the making, as both were set to be No. 1 seeds before COVID-19 led to the cancellation of the 2020 NCAA Tournament. "We got robbed of the opportunity," Drew said. Both programs are chasing their first-ever national championship.

Few said he wished Baylor and Gonzaga had been able to play earlier in the season so a rematch could have determined the national title.

"I think the way it turned out is probably the best scenario you could possibly imagine for college basketball in general and, heck, sports in America."