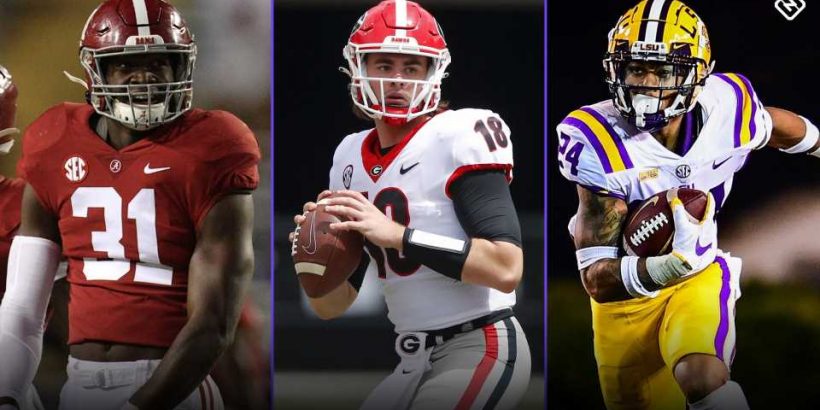 Finally, after a miserably long offseason, the SEC will get back to what it does best (besides dominating headlines): playing football.

The conference this year boasts five teams ranked in the preseason AP Top 25 Poll, including No. 1 Alabama, No. 5 Georgia, No. 6 Texas A&M, No. 13 Florida and No. 16 LSU. Ole Miss and Auburn could also potentially become big players in the Southeastern football theater.

But then, not every schedule is built the same, even among conference opponents. For example, Georgia faces only two opponents ranked in the top 25 of preseason polls — Auburn, on the other hand, faces five. In terms of strength of schedule, many teams came out on the short end of the stick.

That’s true even among conference opponents, where teams such as the Crimson Tide, Georgia Bulldogs and Aggies automatically bump up the degree of difficulty for any opponent; on the other end of the spectrum are teams such as Vanderbilt, Mississippi State and South Carolina. Of course, this is all conjecture, but if preseason rankings are to be believed then it’s already easy to point out who the biggest contenders are for the 2021 College Football Playoff.

With that, Sporting News looks at each SEC team’s schedule, breaking down the number of ranked opponents and the key stretch of the season for every program:

Alabama will be favored in all its matchups this year, but nonetheless has several opponents that could prove problematic. The Tide will likely play three preseason-ranked opponents in the first six weeks of the season in No. 14 Miami, No. 13 Florida and No. 6 Texas A&M, not to mention an Ole Miss team that can put up points on anybody (just ask Nick Saban after last year’s 63-48 win against the Rebels). Things get a little easier from there on paper, with No. 16 LSU the only remaining ranked opponent; but don’t discount Alabama’s trip to Jordan-Hare Stadium to face Auburn: The Tide haven’t won there since 2015.

Things don’t get much easier for Sam Pittman a season after he led a much-better coached Razorbacks squad to a 3-7 record. Three of those losses came by less than a field goal, so this team has reason to be optimistic in 2021. But a brutal schedule out of the gates could go a long way in determining the story of this season. That starts with a Week 2 visit from No. 21 Texas, led by former Alabama offensive coordinator Steve Sarkisian, who put up 45 points on Arkansas last year. Add top-10 opponents Georgia and Texas A&M in Weeks 4 and 5, respectively, and it’s feasible the Razorbacks start the season 2-3.

It’s tempting to list the final four games of Auburn’s season — bookended by No. 6 Texas A&M and No. 1 Alabama — as the key stretch, but the Tigers likely won’t be favored in either. Instead, first-year coach Bryan Harsin can build some momentum for this team with a win against any of No. 19 Penn State, No. 16 LSU or No. 5 Georgia. He has two weeks to get ready for the Nittany Lions, then a buffer game vs. Georgia State, before jumping head first into his first SEC schedule. A loss to all three ranked opponents would be a tough start for Harsin in his first year on The Plains.

Fourth-year coach Dan Mullen has had a full four-year recruiting cycle to build the Gators to his liking, but it feels like his best chance to challenge for an SEC championship and Playoff berth was in Year 3 with Kyle Trask, Kadarius Toney and Kyle Pitts. How their replacements perform will go a long way in determining how this season goes. A visit from No. 1 Alabama in Week 3 will be tough, but the key stretch is against LSU and Georgia: The Gators have a revenge game against the Tigers and, following a bye week, the annual neutral-site rivalry with the Bulldogs (whom Florida mauled 44-28 last year). Even if Florida loses to the Crimson Tide, the schedule is set up so the Gators can still make it to the conference title game with a win against both.

The Bulldogs are set up for a 10-win season at a minimum, with only two real challenges on the schedule. It all begins Week 1, when they travel to Charlotte to take on No. 3 Clemson in a game that will have massive implications for both teams’ seasons and the Playoff race at large. A win for Georgia will go a long way in building good will for the Playoff committee, even if the team stumbles once down the line; a loss, however, puts pressure on Kirby Smart and Co. to win 12 straight. Likewise, a win against Florida could all but guarantee an SEC championship game berth. A loss could potentially end both the Bulldogs’ Playoff and conference title dreams. The rest of the schedule is a relative cakewalk.

There’s no denying that three-week stretch against No. 13 Florida, No. 16 LSU and No. 5 Georgia will be the biggest games of the season for Mark Stoops and Co. But it’s worth noting that this team went 2-3 against ranked opponents last year, beating No. 18 Tennessee and No. 23 N.C. State in a bowl game (and battling No. 5 Georgia to a tough 14-3 loss). This team doesn’t have any real championship aspirations, and its season revolves around Florida and Louisville. A win against both (or either) would mark a successful season.

Ed Orgeron has a tough road back to the Playoff, a year after suffering a 5-5 season following their national title-winning campaign. Regardless, this team has legitimate championship aspirations, and it’s entirely possible this Tigers squad enters a decisive four-week stretch against Florida, Ole Miss and Alabama with an 6-0 or 5-1 record. The Gators will be looking for revenge after last season’s shoe-throwing fiasco, and Lane Kiffin can scheme with the best of them. Alabama is Alabama. Following that, a season-ending game vs. No. 6 Texas A&M awaits. It’s not impossible, but it will be difficult to traverse that schedule unscathed.

Credit to Bulldogs coach Mike Leach for scheduling a relatively robust nonconference schedule to start the season in Louisiana Tech, N.C. State and Memphis. He did himself no favors, however, considering the next three games are vs. No. 16 LSU, at No. 6 Texas A&M and at home vs. Alabama. Mississippi State must go undefeated in the first three games or otherwise win at least one against that SEC trio. Arkansas and Auburn will be tough challenges in the final quarter of the season, as will rival Ole Miss.

The Tigers’ key stretch of the season comes in the final quarter, when they play ranked opponents in Georgia and Florida and close against Sam Pittman-led Arkansas. Boston College, Tennessee and especially Texas A&M are no slouches either. How will Eli Drinkwitz handle this slate in Year 2?

How important is that Week 4 game at No. 1 Alabama to Lane Kiffin and Ole Miss? They took their bye in Week 3 to get two weeks to prepare for the Crimson Tide. Alabama’s defense should be much improved from last year, but the offense loses several offensive playmakers — including four in the first round of the 2021 NFL Draft. Matt Corral could be one of the top quarterbacks of the season, but it’ll take more than a timely bye week to go into Bryant-Denny Stadium and come out with a win. Arkansas, Tennessee and especially No. 16 LSU will be difficult opponents, as will Liberty (coached by former coach Hugh Freeze) and Texas A&M.

Shane Beamer has his work cut out for him in his first season in Columbia: Four ranked opponents, including three in the top 10. Georgia will be difficult, as will No. 6 Texas A&M. But the real test comes in the final stretch of the season, starting and ending with home games against vs. No. 13 Florida and No. 3 Clemson, respectively. The good news is that the easiest game of that stretch (Missouri) is the only one on the road. But the Gamecocks are looking at a potential 1-3 record to end the season; Williams-Brice Stadium will need to be absolutely raucous.

Yet another first-year SEC coach in Josh Heupel cuts his teeth with a rough-and-tumble SEC schedule. The Volunteers are lucky to avoid No. 6 Texas A&M and No. 16 LSU in the SEC West, but there’s no avoiding No. 1 Alabama, their permanent cross-division rivals. The Tide are undefeated against Tennessee since Saban took over the program in 2007, and that streak has long since dominated the discussions around this rivalry. No. 5 Georgia hosts Tennessee three weeks later before the season ends against very manageable opponents in South Alabama and Vanderbilt.

Texas A&M could not have asked for a better schedule to coincide with the incredible hype surrounding this program, entering its fourth year of the Jimbo Fisher era after going 9-1 in 2020. The Aggies also avoid both No. 5 Georgia and No. 13 Florida in the SEC East. If Fisher beats Alabama — becoming the first of Saban’s disciples to beat him — then, barring a slip-up, the only other significant opponent on the schedule is No. 16 LSU. Fisher will have to make sure his team doesn’t look past Auburn or Ole Miss, but the Aggies can’t blame the schedule if they don’t make the Playoff this year.

Another SEC team, another first-year head coach. But unlike some of his counterparts, Clark Lea steps into the role for the first time in his 16-year career. Luckily for the Commodores, they avoid all three ranked SEC West opponents in Alabama, A&M and LSU. The nonconference schedule is manageable, with games vs. ETSU, Colorado State and UConn (a win vs. Stanford would be icing on the cake). But how Vanderbilt performs against that SEC schedule will likely determine whether this team gets above .500. That’s something this team hasn’t accomplished since 2013, and it might be a few more years before they reach that threshold again.