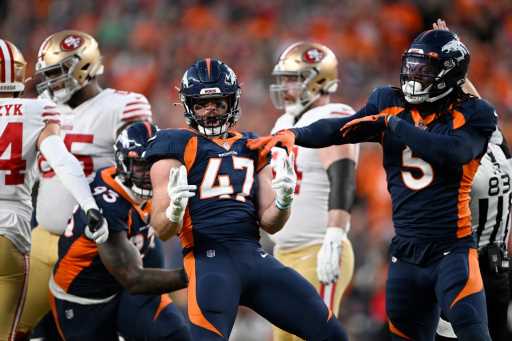 The stadium rocked like 1977, rolling with Rocky Mountain thunder that shook down the echoes of the Orange Crush. On this glorious Sunday night, the Denver defense never rested.

With quarterback Russell Wilson struggling mightily until he had no choice but to find the end zone, it was the Broncos defense that rode to the rescue in an 11-10 victory against San Francisco.

“We knew this was going to be a slugfest,” Broncos coach Nathaniel Hackett said.

The more things change in Denver, the more they stay the same. The Broncos win with defense. They forced three turnovers, sacked San Francisco quarterback Jimmy Garoppolo four times and scored two points on a safety, when Garoppolo stepped out of the back of his own end zone under intense pressure.

Take a bow, Broncomaniacs. Many of the fans who had mocked Hackett a week earlier by counting down the play clock as Denver struggled to snap the football on time, were the same orange-and-blue die-hards who made life miserable for Niners coach Kyle Shanahan in a return to his old stomping grounds.

“The fans played a huge role in this game, cheering us on, keeping us positive, keeping us believing,” Wilson said.

The Broncos trailed until late in the fourth quarter. But when they finally took the lead, Wilson noted, “The ground was shaking.”

Yes, the Broncos have issues. But they also have a 2-1 record.

Wilson is still learning how to ride the Rockies with training wheels.

The Broncos had to hire a tutor for Hackett in Game Management 101, bringing in NFL veteran Jerry Rosburg to be a voice of reason in his ear.

With Denver averaging a scant 14.3 points per game, the best time to sneak off to buy Dippin’ Dots in the stadium is whenever the offense huddles up.

But none of that matters, because while this might be a flawed team, it’s also a team tied with Kansas City for first place of the AFC West.

Wilson completed 20 of 33 passes for 184 yards and a QB rating of 75.8 that might’ve gotten him benched if he wasn’t the proud owner of a new $245 million contract extension.

So maybe our old pal Drew Lock wasn’t the whole problem with the Denver offense?

As an offensive mastermind, Hackett is no Shanahan. As author of a 15-play script to open the game, Hackett is definitely not Mike and might not even be Kyle. Through three games, the Broncos have scored three touchdowns, only one of them before halftime.

We all want to see Russ cook. Would it be too much to ask Hackett to give Wilson more than the ingredients for Aunt Erma’s tuna casserole with the saltine crackers crumbled on top?

For much of this game, the Broncos were a three-and-out tribute to former offensive coordinator Pat Shurmur. Unable to move the chains, Wilson got booed by the Denver crowd. Were the Seahawks correct to break up with him?

But, as anyone in Seattle could attest, what makes Wilson a winner is the ability to save his best for last.

After going nowhere for three quarters, Wilson took the field with 10 minutes, 14 seconds remaining in the game, with the Broncos trailing 10-5.

Wilson led a 12-play, 80-yard touchdown drive, capped with a one-yard run by Melvin Gordon. But this march was born of the accurate arm, quick feet and steely will of Wilson.

Buying time in the pocket by spinning to his left, Wilson launched a 27-yard pass to Kendall Hinton on the run in a third-and-long situation that got the momentum rolling. At the San Francisco 36-yard line, Wilson scrambled for 12 yards.

Where was that magic all night? Maybe he beat the Niners out of habit. Wilson’s career record against San Francisco is now 17-4.

After Denver took the lead for the first time with 4:10 remaining in the fourth quarter, the defense sealed the deal, with an interception by linebacker Jonas Griffith and a fumble recovery by safety Kareem Jackson snuffing out drives by the Niners.

The Denver defense is allowing a stingy 12.0 points per game.

Hey, was that a game ball we saw in Griffith’s possession?