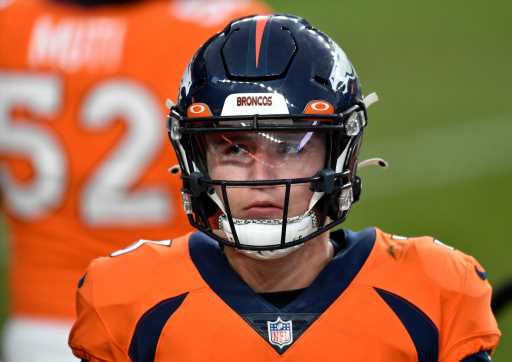 When he was hired as the Broncos’ new general manager on Jan. 13, George Paton said the organization, despite five consecutive years out of the playoffs, was a “sleeping giant.”

As the 48-hour negotiating period begins Monday, followed by Wednesday’s kickoff of signings and trades, here is a position by position outlook.

Level of need: High. Lock (16 touchdowns/15 interceptions/4-10 record) has support internally, but the realization is the Broncos need to equal parts find a better-suited backup and one who can ably replace Lock if he doesn’t progress. Houston’s Deshaun Watson is the grand slam target, but until general manager Nick Caserio starts returning phone calls, the Broncos and other teams must move forward with their plans.

What we’d do: Because Lock is on his rookie contract, the Broncos can afford to pay decent money ($5 million-$7 million) for a veteran backup such as Dallas’ Andy Dalton, Chicago’s Mitchell Trubisky or Miami’s Ryan Fitzpatrick. They should attempt to sign one of them and if Watson becomes available later, so be it.

Level of need: Moderate. If the Broncos keep Gordon and Lindsay signs an anticipated low-round tender, Paton should be in good shape. But if Lindsay departs for a more prominent role, the Broncos should wait until Day 3 of the draft to find a running back.

What we’d do: If Lindsay signs an offer sheet with another team, decline to match and dig into the tape of running backs expected to be available in rounds 3-7.

Level of need: Low. The Broncos don’t need to cut Vannett for cap purposes and he has value as an in-line blocker/occasional pass-catcher. Fant led the team with 62 catches last year and Okwuegbunam was tracking the right away (11 catches/121 yards) when he tore his ACL last November.

What we’d do: Decline to tender Fumagalli, but offer him a one-year contract to remain with the Broncos as a depth option/special teams player.

Level of need: Low. If the Broncos tender Patrick, they can enter training camp with all of their top receivers. The offense will be boosted by Sutton’s return from a torn ACL.

What we’d do: We would use a second-round tender on Patrick because the receiver room isn’t overpriced, he would be insurance if Sutton has a setback and has special teams experience.

Level of need: Low. If Wilkinson leaves, the Broncos may poke around for right tackle depth since Anderson is a left tackle by trade.

What we’d do: We would wait for the backup offensive line market to develop and even if Anderson projects to be a good right tackle/left tackle backup option, see if somebody’s asking price is acceptable.

Level of need: High. Note the lack of defensive ends currently under contract. The Broncos have already released Jurrell Casey and if Harris departs, it becomes a big-time priority.

What we’d do: Before Wednesday, we would offer Harris a three-year contract in the range of $6.5 million per year to see if he jumps at the security instead of testing the market.

Level of need: Moderate. The longer there isn’t a decision on Miller, the more it feels like he’ll be back after missing all of 2020 with an ankle injury. A reserve edge rusher whose tape shows solid work against the run would make sense.

What we’d do: Our stance on Miller hasn’t changed — it’s time to move on and create nearly $14 million in cap space. But if Paton opts to keep Miller, it eliminates spending decent money on an edge player so we would offer Attaochu a one-year deal.

Level of need: High. Entering last year’s training camp, the Broncos had designs on playing Strnad as the sub-package coverage linebacker. But he missed the entire season following wrist surgery.

What we’d do: Is Tennessee’s Jayon Brown worth pursuing for $11 million per year? No. We would tender Johnson, who led the Broncos in tackles last year, and then plan on using a draft pick on a linebacker with coverage skills and have him compete with Strnad.

Level of need: High. The No. 1 position group for Paton to address. Callahan (foot) and Bassey (ACL) have injury issues and Ojemudia is an outside corner and led the Broncos with 15 missed tackles.

What we’d do: Make signing a veteran cornerback the top priority in the form of players like Washington’s Ronald Darby, the Chargers’ Michael Davis, Dallas’ Chidobe Awuzie or Pittsburgh’s Mike Hilton and Cam Sutton.

Free agents: Justin Simmons (has been applied the franchise tag) and Will Parks.

Level of need: Low. Simmons was tagged on March 5 to help facilitate his return and Jackson is easier to carry on the cap than find a replacement for this year.

What we’d do: The Broncos re-signed Marshall last week and Locke is also viewed favorably so we wouldn’t do much in free agency but consider a safety in the opening four rounds of the draft who can replace Jackson in 2022.

Level of need: Low. McManus and Martin are on long-term contracts and Bobenmoyer had a solid first year. Spencer was re-signed last week to serve as the returner.

What we’d do: Special teams coordinator Tom McMahon needs some reinforcements in terms of core players.