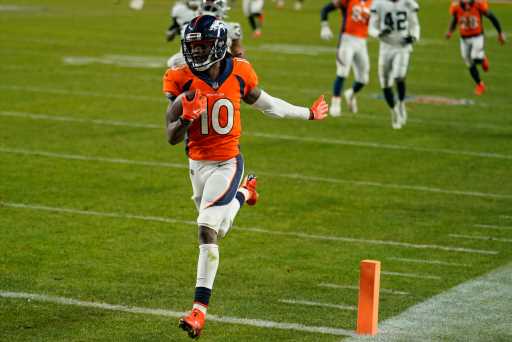 Analysis from the Broncos’ 32-31 loss to the Raiders in the season finale Sunday at Empower Field at Mile High.

Jerry Jeudy — After five drops against the Chargers in a nightmare game last week, Jeudy bounced back in a big way. His 92-yard catch-and-run for a touchdown put the Broncos up 31-24 midway through the fourth quarter, and for a moment it appeared to be the game-winning score for Denver. The rookie finished with five catches on seven targets for 140 yards, a season high. His game-breaking speed was readily apparent on the touchdown catch in which he dashed away from multiple defenders.

Denver safeties — Justin Simmons recorded his team-best fifth interception of the season, and Kareem Jackson had his first pick of the season as the veteran safeties again proved their status as one of the league’s best tandems. While the Broncos’ thinned and inexperienced cornerbacks were exposed at various points, Simmons and Jackson provided stability. They each had three tackles, while Simmons had two pass break-ups and Jackson had a break-up and a fumble recovery.

Michael Ojemudia — His roller-coaster season continued as the rookie demonstrated flashes of game-changing potential while also giving up numerous catches. In the first half, Ojemudia got burned for a 57-yard catch by Nelson Agholor that set the Raiders up for a field goal. But the next drive, Ojemudia redeemed himself with a forced fumble on a big hit on tight end Darren Waller. He became the ninth rookie corner in NFL history to force three fumbles in the same season. Ojemudia also had another forced fumble in the second half to set up a Denver TD.

Vic Fangio — Once again, Fangio’s game management came into question following the last-second loss. After the Raiders scored to pull within one point with 24 ticks left, the Broncos head coach inexplicably called the team’s final timeout before the two-point conversion attempt. That bailed out the Raiders, who were disorganized at the line of scrimmage and were on track to taking a delay-of-game penalty. Once the Broncos got the ball back, Lock drove them to the Raiders’ 45-yard-line, where Fangio elected for a 63-yard field goal attempt with nine seconds left (that was blocked) instead of running another play designed toward the boundary.

Brandon McManus — After being “McMoney” for so much of the year, McManus — who struggled in his prior two games with a pair of missed extra points against Carolina, and an uncharacteristic miss on a 37-yard field goal last week — has set a high bar for himself that he didn’t live up to again Sunday. McManus had hit an NFL-record-tying 10 field goals from 50-plus this season, but missed from 56 yards in the second quarter, and then had a 70-yard field goal blocked at the end of the half and a 63-yarder blocked in the waning seconds of the fourth. In fairness, he also made field goals of 22, 37 and 26 yards.

Will Parks — The 26-year-old defensive back, re-signed to the Broncos on Dec. 2 after his stint in Philadelphia didn’t work out, struggled in coverage at times. Most notably, one of Parks’ best plays — a second-quarter tackle that forced the Raiders into a 3rd-and-short — was followed up by an ugly one. After that tackle, Parks popped up and fist-bumped Derek Carr, who then proceeded to drop a dime in over Parks’ head to tie the game with a 28-yard touchdown pass to Waller.