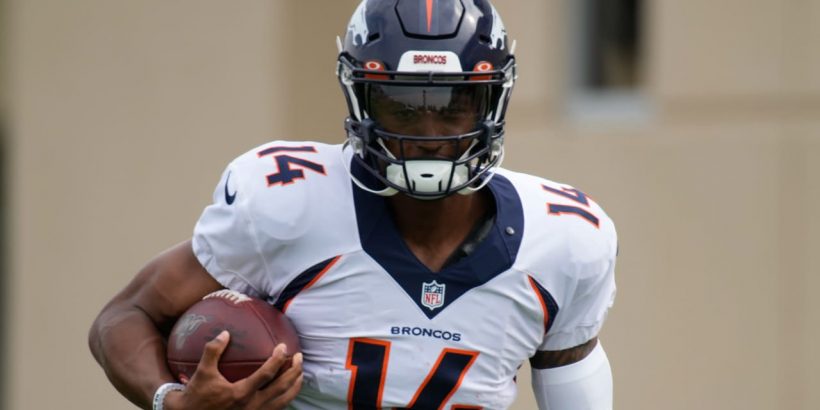 In his rookie year of 2018, he had a strong performance as the second lead behind star wideout Emmanuel Sanders﻿. The next year, after Sanders’ midseason trade to San Francisco, he had his breakout performance. Sutton finished 2019 with 1,112 receiving yards, nearly double any other player on the roster, and was named to the Pro Bowl. Sutton had more receiving yards and receiving touchdowns than any player in Broncos history through his first two seasons.

Last year was slated to be his coming out party. The blockbuster campaign with Sutton’s name flashing on the marque.

What happened was akin to John Carter, with Sutton’s 31 snaps on the season comparable to Disney’s $200 million box office loss. Such high expectations with no payoff.

Sutton missed the first game of the season with an AC joint sprain in his shoulder and ended up tearing his ACL against the Steelers in Week 2 while attempting to make a tackle after an interception.

Sutton isn’t looking to walk the path of John Carter lead Taylor Kitsch, where high expectations — Kitsch’s Tim Riggins from the TV show Friday Night Lights is still an all-time favorite character of mine — are followed by disappointment and a career of mediocrity. No, look at him like Ryan Reynolds. Recover from Green Lantern and make Deadpool.

“I’m not thinking about coming out of the gates slow,” Sutton told me as he came off the practice field at Dove Valley on Wednesday. “It’s not about proving anything to anybody else. It’s more so just showing myself what I know I can bring to the table and just elevating that. Building on the success I had two years ago and not giving any concern for, Will he ever be the same Courtland Sutton? Well, I’m going to be the same Courtland Sutton … plus some. That’s what my mindset has been and that’s what my mindset was during my rehab. Not just to get to where I was at, but to ascend past that. And be an even better receiver than I was.”

Since undergoing surgery last year and starting his rehab, Sutton’s had two pillars of focus. First, he’s relied on a circle of friends who have traveled the road to recovery. This has included constant conversations with former Broncos WR Demaryius Thomas — whose first two NFL seasons were marred by a series of injuries, including a torn Achilles — about what Sutton calls the “mental chess match” of rehab. Sutton also has two current teammates who’ve overcome ACL tears of their own in pass rushers Von Miller and Bradley Chubb. Miller, who actually just missed the entire 2020 season with an ankle injury, suffered his ACL tear back in December of 2013. That didn’t stop him from averaging 12 sacks per season from 2014 through ’19 and building a Hall of Fame résumé. Chubb tore his ACL in Week 4 of the 2019 campaign, then bounced back to make his first Pro Bowl last season. These two were there for Sutton, supplying constant encouragement and shared experiences with what worked and what didn’t work during their own ACL recoveries.

“Those are all check marks,” Sutton said with a smile. “And then practice. My first rep of 7-on-7, that’s a checked box. My first rep of team, that’s a checked box. You don’t think about it again. We go to Minnesota and go against other DBs. Bet. I know I can still compete at a very, very high level. Check. It’s continuing to get these boxes checked that you can do this and this and this.”

There is one box left to be checked in Sutton’s mind. The 25-year-old stands 6-foot-4, 216 pounds. He’s a physically dominant receiver. He consistently wins 50-50 balls. He’s brilliant after the catch and uses his body to his advantage anywhere on the field. The problem is that the strengths of his game are the exact situations the Broncos are holding him out of, to avoid risking any injury as he works his way back. Smart, yet frustrating.

“I feel like I’m getting close,” Sutton said. “I’m not really getting a whole bunch of those types of reps in practice. I’m able to feel out how my body feels doing other things. I feel like I’m close. I think being able to do that … being in that first game rep, going up and just making that play and knowing that bullets are flying and that it’s all live and it’s the real deal. Once that first game rep happens, I’m going to be good.”

Sutton doesn’t know when that first game rep will happen. He didn’t play in Denver’s first preseason game at Minnesota. The plan is for him to play, even if it’s just a drive, in one of the two remaining preseason games. Saturday against the Seahawks would be his next opportunity, but it appears to be a long shot, so the final game versus the Rams could be his last opportunity to “knock that last wall down.”

“That’s one of the big things for me,” Sutton said of the final box yet to be checked. “To go and do things and not have to go and think about it at all. Go play. You’re fine. It’s fixed. It’s 100 percent. You can go do this. Just trust it. I think that’s the last little bit that I need. I’m looking forward to it, for sure.”

When it happens, the final box will be checked.

Then we’ll all grab some popcorn and hopefully enjoy the show.