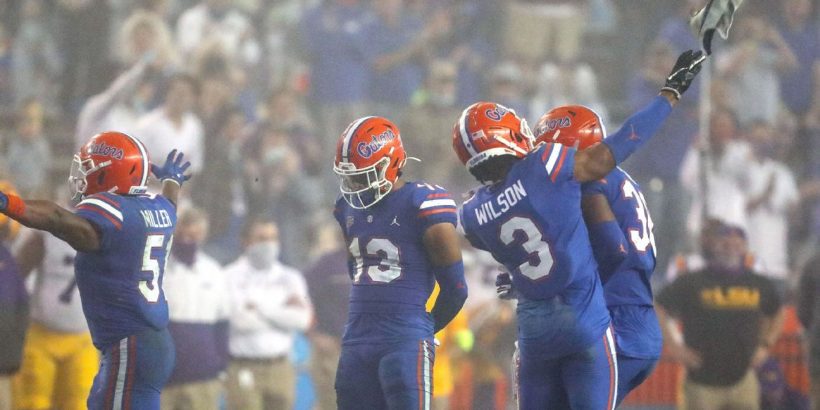 TEMPE, Ariz. — Former Florida cornerback Marco Wilson, whose decision to throw the cleat of an LSU player late in a December game led to the Tigers kicking the game-winning field goal, was taken in the fourth round of the NFL draft by the Arizona Cardinals on Saturday.

The Cardinals, who were without a third- or fourth-round pick this year, traded with the Baltimore Ravens to move up into the fourth round to take Wilson.

Wilson threw the shoe after tackling LSU’s Kole Taylor to get a stop on third down. The shoe came off Taylor in Wilson’s hand and Wilson chucked it in celebration. He was flagged for unsportsmanlike conduct, which kept LSU’s drive alive and led to the Tigers kicking a game-winning field goal with 23 seconds left.

Wilson said that incident gave him a lesson in self-control, which he plans on taking with him into the NFL..

“You just got to just be in control of your emotions at all times and just make sure you’re just doing the right things,” he said. “But, also, just learned that silly mistakes like that can affect not only just you but a lot of people around you, so you just got to stay away from doing things like that.”

Wilson felt he should’ve been drafted higher than the fourth round, but said his injury history may have played a role in him being a third-day pick. He tore his right ACL in high school and then his left ACL during his sophomore season at Florida.

Wilson trained for the combine at EXOS in Phoenix, so he has a familiarity with the area.

“I really liked it out there,” he said. “I enjoyed it a lot, and, man, it was a great environment out there. So, I’m happy to be going back there.”

Wilson, who hopes to rely on his experience of starting as a freshman for the Gators during his rookie season with the Cardinals, will join a cornerback room that was in need of depth, especially for the future. The Cardinals’ projected outside corners this year are Malcolm Butler and Robert Alford, who has yet to play a down for the Cardinals because of injuries since he initially signed with them in 2019. Both are on one-year contracts. Alford was cut after two years into his three-year deal and then re-signed on a one-year contract. Arizona’s starting nickel corner is Byron Murphy, who’s entering his third season.

Wilson said he was aware of Arizona’s situation at his position.

“I know that they’re in need of cornerbacks,” Wilson said. “I know there’s a lot of guys who are there already that are very talented and older guys who have a lot of experience, and I feel like I could come in and make an impact and while doing that, learn a lot from those guys who are already there.”