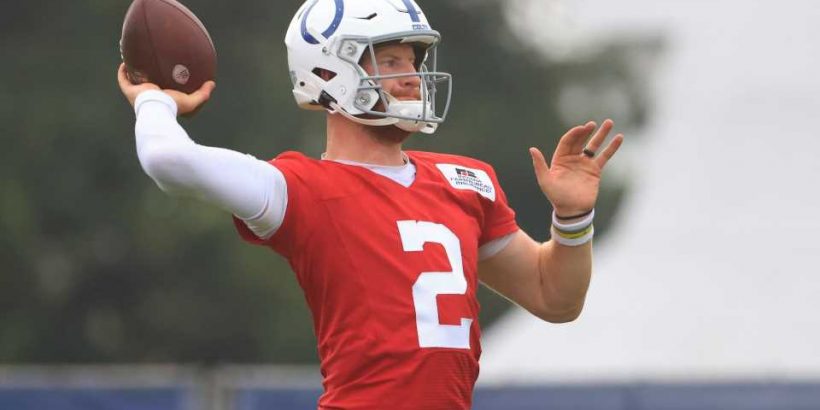 The Colts got some good news about Carson Wentz and a couple of their banged-up offensive linemen on Sunday afternoon.

Wentz, guard Quenton Nelson and center Ryan Kelly are all expected to return to practice this week. They will be available on a limited basis, ESPN’s Mike Wells reports. Wentz and Nelson are both dealing with foot injuries that were expected to keep them out 5 to 12 weeks.

It’s worth noting that Colts coach Frank Reich was optimistic about Wentz’s status at Colts training camp on Monday. However, he still wouldn’t provide an updated timeline for Wentz’s return.

“I think it’s very positive,” Reich said of Wentz’s status and recovery. “Like I said, I continue to be optimistic about his return, but it still just doesn’t make any sense for me to try to predict when that will be because, as the rehab continues and he starts pushing it, you don’t know. Is there a setback along the way when you really start going harder and you really start testing it out?

“Right now everything feels like it’s great, but how far have we really tested it? We’re only two weeks out. I think that’s why it makes sense to me and our team here, hey, let’s let him get further into this process and the rehab and the actual getting on the field and taking next steps there to determine the pace that we go.”

So, will Carson Wentz start in Week 1? It’s not a guarantee, but with his recovery going well, it’s not out of the question. His Week 1 status will likely depend on how he fares in practice this week.

If Wentz isn’t available, Indianapolis will be forced to start either second-year pro Jacob Eason or sixth-round rookie Sam Ehlinger at quarterback. Neither Eason nor Ehlinger has stood out during the preseason; Eason likely holds a slight edge over Ehlinger at the moment given the rookie’s turnover problems.

Still, the Colts would very much prefer to have Wentz start the season as their quarterback. His performance at practice will help the team determine if that’s possible.