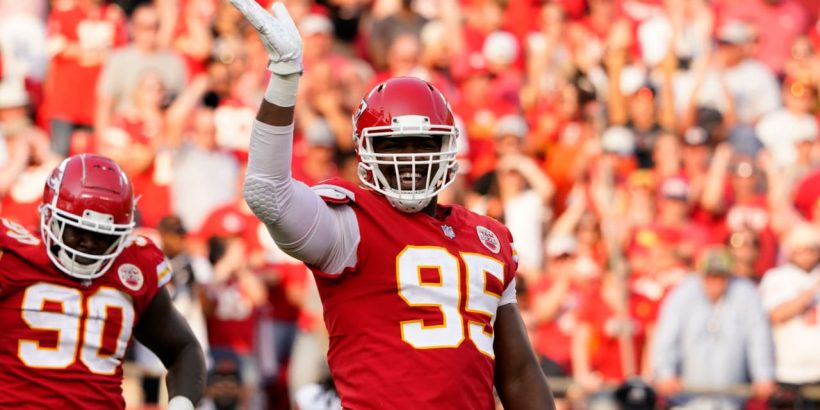 KANSAS CITY, Mo. — The Kansas City Chiefs came into their season opener with an assortment of questions surrounding their offense, most notably the potential of their rebuilt offensive line.

They walked away with more answers about a defense that once again needs to be formidable for this team to chase another championship.

The highlights will say this afternoon belonged to ﻿Patrick Mahomes﻿ and ﻿Tyreek Hill﻿. The truth is that the Chiefs defense seriously delivered for this squad on a day when it needed it most.

Kansas City’s 33-29 win over the Cleveland Browns proved to be a lesson in how far the Chiefs have evolved over the last few years.

They took the field without two of their best defensive players — All-Pro safety ﻿Tyrann Mathieu﻿ and defensive end Frank Clark — and promptly found themselves trailing by 12 points at halftime. Everybody inside Arrowhead Stadium expected Mahomes to lead a furious rally in the final two quarters. What was more impressive was watching that undermanned defense stifle a Cleveland offense that had been rolling for a good portion of the day.

The Chiefs found big plays from their stars (defensive tackle Chris Jones) as well as less heralded role players (linebacker ﻿Ben Niemann﻿, safety ﻿Juan Thornhill﻿ and cornerback Mike Hughes). They also learned that this unit should be better than anticipated once it’s finally intact. This could’ve easily been a game that ended in defeat, but it became evidence of how much they’ve grown on that side of the football.

“We’ve got a group of guys that is able to step up when adversity faces us,” Jones said. “Especially in critical situations.”

It’s important to understand what defense means to the Chiefs.

They generate so much magic with Mahomes (337 passing yards and three touchdowns against Cleveland), Hill (11 receptions, 197 yards and one touchdown) and Pro Bowl tight end Travis Kelce that it’s easy to forget that offense only has taken this team so far in the past.

The Chiefs finished the 2019 season with a win in Super Bowl LIV because their defense became reliable during the second half of that year. They missed their opportunities to claim championships in 2018 and 2020 because that same unit wasn’t nearly as effective in critical situations.

This may always be the reality of the Chiefs during the Mahomes era.

He’s going to help that offense generate a ton a points, but the ability to stop opponents will be just as crucial to whatever success this team enjoys in the long run. Kansas City also isn’t the first squad to deal with that fact. The NFL is littered with franchises who developed prolific offenses that fell short of expectations because of their defensive limitations.

What’s most encouraging about this year’s Chiefs is that they entered this season with ample optimism about the potential of this defense.

Jones moved to defensive end but really accepted a role as a matchup nightmare who could be moved up and down the line depending on the situation. Kansas City added playmakers in free agency (defensive tackle Jarran Reed﻿) and the draft (rookie linebacker Nick Bolton﻿) and watched other blossoming talents emerge (linebacker Willie Gay Jr.﻿, who also missed Sunday’s game, and cornerback L'Jarius Sneed are expected to play bigger roles in their second years in the league). This unit has the potential to be the best the Chiefs have fielded since Mahomes became a starter in 2018.

The Browns did gain 457 total yards, but only 139 of that came after halftime. They did have a 22-17 lead midway through the third quarter, but then Thornhill forced a fumble by Browns running back Nick Chubb﻿, a play that led to a recovery by Neiman and a 43-yard field goal by Harrison Butker that cut the deficit to two points. Once the Chiefs had a 33-29 lead late in the game, it was Hughes who intercepted a rushed throw by Browns quarterback Baker Mayfield as he tried to elude pressure.

“That’s what great teams do, and the Chiefs are definitely one of, if not the best team in the NFL,” Chubb said. “You have to finish. We made too many mistakes, with me having the worst one. We made too many mistakes and didn’t rally back from our mistakes. … They played very well, they held onto the ball, they made big plays and they stopped us when they needed to. Give props to them.”

When asked about what changed in the second half of the game, Jones said the Chiefs simply found their groove.

“I think we were all over the place [in the first half],” he said. “They were giving us a lot of different looks, especially with the play action when we were expecting the heavy run and we’d expect a run and we’d get a play action over the top or we’d expect play action and we got a run down the middle. So we just (had) to settle down as a defense, and once we got settled, we were able to get them off the field.”

Jones ended up being one of the game’s most spectacular players. He had lobbied for years to have more opportunities at defensive end after establishing himself as an elite defensive tackle. All that hope paid off on Sunday. It wasn’t just the two sacks he produced, either. It was the timing of them, the way he erupted when his team desperately needed a momentum-altering play.

Jones’ first sack was toward the end of the first half. That 11-yard loss moved the Browns completely out of range for a field goal that could’ve swelled their lead to 15 points at halftime. Jones was just as timely with the Chiefs trailing, 29-27, with just over 10 minutes left in the fourth quarter. He dumped Mayfield for a six-yard loss on the first play of that Browns possession, a setback that ultimately led to Cleveland punting three plays later.

Chiefs head coach Andy Reid said he’d never seen a defensive lineman take over a game in the fashion that Jones did. He even called his star “possessed” during certain stretches of the action.

“I think it was just [his] mindset that something’s got to come up here,” Reid said of Jones. “He was one of the captains today. He takes a lot of pride in where he’s come from with this organization. He’s not the young buck anymore, he’s a guy. So, he’s one of our veteran players and he showed great leadership with that and fired everybody up.”

The Chiefs surely will need more of that as this season continues. They will have their other key players back soon, as Mathieu just returned from the reserve/COVID-19 list Saturday and Clark was close to playing despite a lingering hamstring injury.

There’s little doubt Kansas City can use their help in the coming weeks. The Chiefs will play three more teams who made the playoffs last season within their next six games, starting with a Sunday night meeting in Baltimore next week.

We all know the Chiefs will bring plenty of offense into each one of those contests. That’s simply what they do, week in and week out. What makes this year more intriguing is what they’ll also be providing on the other side of the football. From the looks of their season opener, there are going to be a lot of exciting moments coming from that bunch as well.