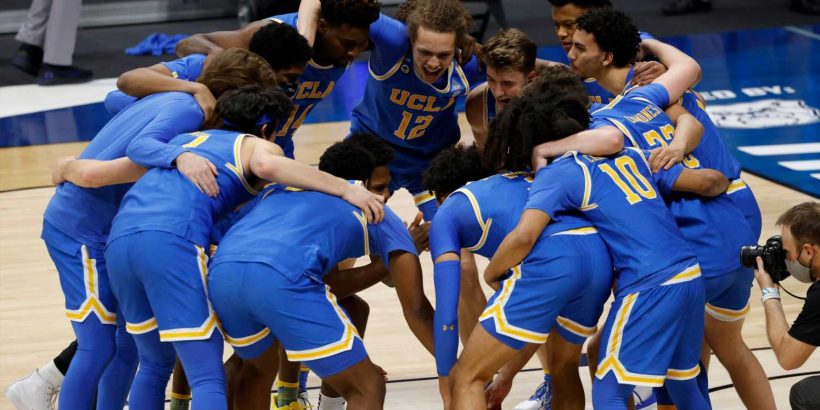 INDIANAPOLIS — The 2020-21 men's college basketball season is officially in the books following one of the sport's most challenging years due to COVID-19 postponements and restrictions.

But now that Baylor has cut down the nets and an epic 2021 NCAA Tournament is over, we can look at the season ahead.

Events of the offseason – players entering the NBA draft, transfers and late decisions among incoming freshmen – are sure to shake things up. But for now, here's a look at the teams best positioned to be among the nation's elite come November, when the 2021-22 season tips off:

1. UCLA (22-10). Coach Mick Cronin could lose some of his young roster to the NBA if one (namely Johnny Juzang) tries to capitalize on the epic Final Four showing vs. Gonzaga. But regardless, Cronin knows how to get a team to peak at the right time despite setbacks (losing second-leading scorer Chris Smith eight games in this past season). Tyger Campbell and Jaime Jáquez Jr. (if he stays) are both poised for even bigger seasons as rising juniors.

STILL GREAT: Gonzaga's case for being one of the best non-champions in men's Division I history

The UCLA Bruins huddle up before tipoff during the first round of the 2021 NCAA Tournament on Saturday, March 20, 2021, at Hinkle Fieldhouse in Indianapolis, Ind. (Photo: Alton Strupp, IndyStar-USA TODAY Sports)

2. Duke (13-11). The Blue Devils missed this year’s NCAA Tournament, the first time since 1995, but are poised to return with a dynamic team, bringing back Christian Laettner-impersonator Matthew Hurt (18.3 ppg), and coach Mike Krzyzewski is welcoming a star-studded recruiting class that features five-stars Paolo Banchero and AJ Griffin.

3. Gonzaga (31-1). The Bulldogs will lose two of their big three – Jalen Suggs and Corey Kispert – to the NBA draft, along with key role player Joel Ayayi. It's unclear if NCAA Tournament star big man Drew Timme returns. That leaves one surely returning starter in Andrew Nembhard (9.2 ppg, 4.4 apg) back for coach Mark Few. Reserves Anton Watson and Aaron Cook can play larger roles, while five-star freshman Hunter Sallis can step in right away. Chet Holmgre, the nation's No. 1 recruit, is leaning toward the Zags.

4. Michigan (23-5). The Wolverines likely lose Isaiah Livers and Franz Wagner to the NBA, but there's a strong chance they bring back second-team All-American Hunter Dickinson and key players in the nucleus. Coach Juwan Howard has hauled in a No. 1 recruiting class (per 247 Sports) that’s headlined by five-stars Caleb Houstan and Moussa Diabate.

5. Ohio State (21-10). Sadly the 2020-21 Buckeyes will be best remembered for a first-round NCAA Tournament upset to No. 15 seed Oral Roberts. But OSU figures to return leading scorer Duane Washington Jr. (16.4 ppg) for his senior season, while rising junior E.J. Liddell (16.2 pgg, 6.7 rpg) entered his name in the draft but could still return. Either way, coach Chris Holtmann should have ample talent returning to contend for a Big Ten title and have a redemptive season.

6. Baylor (28-2).The national champion Bears will lose their backcourt of Jared Butler, Davion Mitchell and MaCio Teague, but that means Adam Flagler (9.0 ppg) could be poised for a breakout junior campaign, and coach Scott Drew will turn a new-look roster into a contender. Kendall Brown is a five-star freshman who can help with that.

7. Purdue (18-10). Leading scorer Trevion Williams (15.5 ppg, 9.1 rpg) is expected to return for his senior season, while rising sophomore Jaden Ivey (11. ppg) is ready to blossom further following a promising freshman campaign. Coach Matt Painter will have a much more seasoned team than the one that was upset by North Texas in the NCAA Tournament.

8. Alabama (26-7). The Crimson Tide are expected to have a lot of talent returning, starting with leading scorers Jaden Shackelford and Jahvon Quinerly. Nate Oats, USA TODAY Sports' national coach of the year in 2020-21, turned Alabama into a contender and Sweet 16 team in two seasons. Year 3 promises to follow that trajectory, especially with top-10 freshman JD Davison in the fold.

10. Kansas (21-9). Coach Bill Self's lifetime contract means continuity in the pilot's chair. What KU's roster looks like in 2021-22 will be less predictable. There's a chance the Jayhawks lose Ochai Agbaji to the NBA, along with departing senior Marcus Garrett, but David McCormack (13.4 ppg, 6.1 rpg) and Jalen Wilson (11.8 ppg, 7.9 rpg) are set to return. Self will be busy on the recruiting trail, where he's yet to land a five-star.

11. Maryland (17-14). Coach Mark Turgeon shouldn't have to play his team off the bubble in 2021-22 as he'll have a veteran-laden team contending for a Big Ten title. Eric Ayala and Aaron Wiggins (14.5 ppg) should shine as seniors should they both pass on trying NBA waters, while eligible transfers Fatts Russell (18.8 ppg in 2019-20 at Rhode Island) and Qudus Wahab (12.7 ppg, 8.2 rpg at Georgetown) will make this squad fully loaded.

12. Villanova (18-7). The Wildcats lose one co-Big East player of the year, departing senior Collin Gillespie, but they could be positioned to return the other co-Big East POY, Jeremiah Robinson-Earl (15.7 ppg, 5.5 rpg) so long as the junior doesn't jump to the NBA. Coach Jay Wright is bringing in a top-five recruiting class to mesh with a core headed by guard Justin Moore.

13. Michigan State (15-13). Northeastern transfer Tyson Walker, one of the best mid-major guards in the country, chose the Spartans over Kansas and Maryland. He averaged 18.8 points and 4.8 assists and was the CAA defensive player of the year. He'll mesh with a returning roster of Joey Hauser and potentially leading scorer Aaron Henry if he holds off on the NBA. Five-star freshman Max Christie will add immediate scoring.

14. Florida State (18-7). The Seminoles will lose projected lottery pick Scottie Barnes and could also lose leading scorer MJ Walker to the NBA draft. But coach Leonard Hamilton lost two players to the NBA last year and still got FSU to the Sweet 16. He'll have returning pieces to mesh with an elite recruiting class that currently ranks second and is headlined by five-star Matthew Cleveland.

15. Texas (19-8). The Longhorns have a new sheriff in town, although he’s more like a general. Chris Beard, a Bob Knight disciple, was able to turn the Red Raiders into a contender — reaching the national championship game in 2019. At a win-hungry, bigger program that underachieved under Shaka Smart, expect Final Fours under Beard. He’ll inherit a Smart-recruited team, but there’s ample talent to fall into Beard’s defense-first philosophy to be in the mix here in Year 1.

16. Syracuse (18-10). Buddy Boeheim (17.8 ppg) went on a three-point shooting tear at the end of 2020-21 to guide the Orange off the NCAA Tournament bubble and into the Sweet 16. The sharp-shooting guard will be back, with his supporting cast of Quincy Guerrier, Alan Griffin and Joseph Girard III. Five-star Benny Williams will be extra ammunition.

17. Memphis (20-8). Coach Penny Hardaway said after his team's NIT title that "it's just the start" for his program that narrowly missed the NCAA Tournament cut as a bubble team. The Tigers are poised to return virtually the whole roster from a group that won 11 of its last 13 games. Landers Nolley II, DeAndre Williams and Boogie Ellis are all expected to return while Hardaway has another top-10 recruiting class coming in.

18. Virginia (18-7). The reigning ACC champion Cavaliers will once again be in the national equation despite losing their top two scorers. Veteran point guard Kehi Clark, a freshman on UVA's 2019 national title team, is back for one more season. Rising junior Trey Murphy III is poised for a breakout season and coach Tony Bennett's system should endure for another promising campaign for the Cavs.

19. North Carolina (18-11). The Hubert Davis era will likely get off to a strong start because the former assistant will inherit a team of players he helped recruit. There's ample returning talent with Armando Bacot and Caleb Love, but much of Davis' job in Year 1 will be to motivate and redefine culture separate from Roy Williams' legacy.

20. West Virginia. If Miles McBride (15.8 ppg, 4.9 apg) and Derek Culver (14.3 ppg, 9.4 rpg) return and hold off on the NBA, coach Bob Huggins will have the 1-2 punch back from one of his best defensive teams. The key will be getting the Mountaineers to elevate back to an elite-defense status.

21. Wichita State (16-6). Shockers coach Isaac Brown will have a full offseason to get this program into contending form after he guided WSU to a regular-season American Athletic Conference title and NCAA Tournament berth after longtime coach Gregg Marshall left the program amid abuse allegations prior to 2020-21. Leading scorer Tyson Etienne (16.3 ppg) will be the focal point for this group.

22. LSU. The Tigers lose Cameron Thomas to the NBA, but figure to bring everyone else back. Trendon Watford (16.3 ppg, 7.4 rpg) will be the key returnee assuming he waits on pursuing the NBA, with his 30 points in the SEC Tournament final vs. Alabama a sample size of his breakout ability.

23. Houston. The Cougars may lose leading scorer Quentin Grimes to the NBA from its Final Four squad. But Marcus Sasser (13.7 ppg) is poised for a big junior season and coach Kelvin Sampson always finds a way to make Houston contend in the AAC.

24. Tennessee (18-9). Coach Rick Barnes is likely to lose a lot in the NBA draft, but there will be enough key returnees from a roster that finished fourth in the SEC and had an NCAA Tournament No. 5 seed. Five-star freshman Kennedy Chandler will make an immediate impact.

25. Florida (15-10). Colin Castleton, a 6-11 big man averaging 12.1 points a game and shooting 60% from the floor, will be back for coach Mike White. If Keyontae Johnson is able to play, it'll be a huge boost. Johnson collapsed on the court and was in critical condition last December, which kept him out for the rest of 2020-21, but that means he won't pursue the draft and may stay in Gainesville under close medical attention. Brandon McKissic, the Summit League's defensive player of the year, is a big-name transfer.