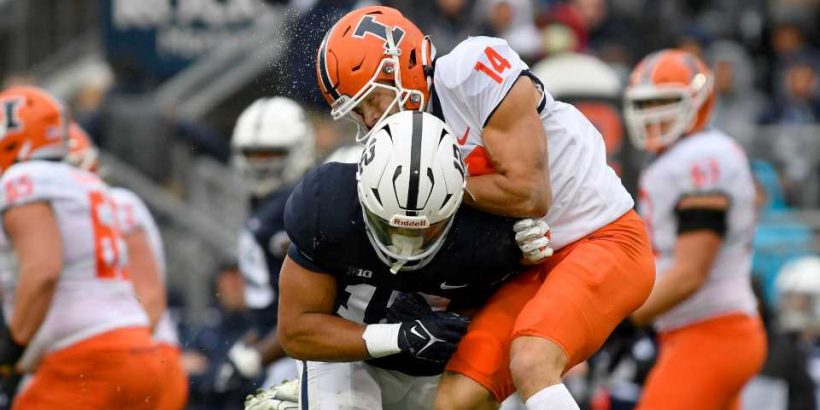 No. 7 Penn State suffered a horrific defeat 20-18 vs. Illinois on Saturday. And it took nine overtimes to get there.

With the defeat, the Nittany Lions’ second in a row, they are no longer in championship contention of any kind. The defense was gashed on the ground as Illinois completely abandoned the passing game (8 of 21 passes completed for 38 yards and one interception). But running backs Chase Brown (33 carries, 223 yards, one touchdown) and Joshua McCray (24 carries, 142 yards) were largely unstoppable. Penn State entered as a 23.5-point favorite.

Still, the defense did a good job to allow only 10 points in regulation, including just the one touchdown. But Penn State’s offense couldn’t do anything, putting up a paltry 227 yards of offense in the entire game. Even the return of quarterback Sean Clifford (19-of-34 passing, 165 yards, one touchdown) couldn’t help the Nittany Lions to a win.

How will Penn State’s loss affect those teams in the top 25? The top four teams — Georgia, Cincinnati, Oklahoma and Alabama — will remain unaffected. Neither will Ohio State or Michigan, though they will get an advantage of a different kind following the Nittany Lions’ defeat.

With that, Sporting News breaks down who stands to move up and down following Penn State’s loss.

The Buckeyes absolutely will benefit from Penn State’s loss, though it won’t show in the latest polls, considering they ranked ahead of Penn State in both rankings. Instead, it gives them a two-game lead in the Big Ten East standings. The one-loss Buckeyes will need to make it to the conference championship game undefeated with only the one defeat vs. Oregon if they want to make the Playoff again.

Even if Ohio State loses, however, it can still challenge for the Big Ten championship. That’s made easier with Penn State’s loss: The Buckeyes would need to lose three Big Ten games — or two, if one of them was to the Nittany Lions in Week 9 — to fall behind them in the conference standings. That’s not going to happen.

The Wolverines showed no sluggishness coming off the bye in a 33-7 romp over Northwestern on Saturday. They guaranteed they wouldn’t drop on the field, considering the margin of victory over the Wildcats. Penn State’s loss will do nothing to affect that and, like rival Ohio State, can only help Michigan in the Big Ten.

The Cowboys also fell from the ranks of the unbeaten, losing 24-21 to preseason top-10 team Iowa State. Mike Gundy’s team would have been the first team to directly benefit from Penn State’s loss, but will now likely fall three or four spots. Oklahoma State should still remain in the top 15.

What does the loss mean for the Cowboys’ Play off hopes? Not much. They’re still in control of their destiny and barreling toward Bedlam, which could be the first of a two-game series in 2021. Like so many other teams this year, Oklahoma State has used its mulligan — but can still get in by winning out and winning the conference championship.

The Spartans have a much-needed bye a week after surviving Indiana 20-15. The Spartans will get a bye-week bump over their division opponent, but it should only be one spot. Regardless, that sets up an undefeated rivalry game vs. Michigan in East Lansing.

If Oregon beats UCLA on Saturday, it will move up one spot as a result of their 6-1 record. Another loss, however, would drop them further down the rankings, behind Penn State, out of the top 15 and completely out of Playoff contention. That would also eliminate the entire Pac-12 team from national championship contention, considering the Ducks are the last one-loss team in the conference.

Despite its frustrating loss to Purdue in Week 7, Iowa still maintains complete control not only in the Big Ten West, but also the Playoff. The Hawkeyes need only win out for the remainder of the season.

The Nittany Lions’ season is over, as far as championship aspirations are concerned. They simply need too much help in the Big Ten to represent the East division in Indianapolis, and need even more help with several undefeated and one-loss teams remaining.

As for the latest set of rankings, Penn State should drop well outside the top 10, and potentially outside the top 15. That will certainly be the case if Ole Miss, Notre Dame, Wake Forest, Texas A&M and N.C. State — all teams with one loss or fewer — win on Saturday. That would set the Nittany Lions to fall all the way to 18, potentially — just above Auburn, over whom Penn State has a head-to-head victory.