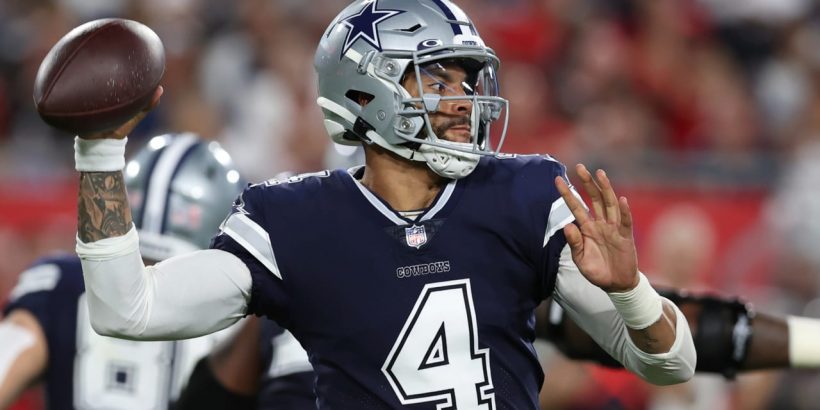 Dak Prescott didn’t throw for nearly a month of the preseason. He was on a pitch count when he finally resumed two weeks ago. There were no such limitations Week 1.

The Pro Bowl quarterback threw as much as ever in Thursday’s season opener versus the Buccaneers. And he did it about as well as he has, too. It was enough to give the Cowboys a late lead, but not enough to keep it.

After Prescott engineered a go-ahead field-goal drive inside the final 90 seconds, Tom Brady responded with a field-goal drive of his own to give the reigning champions a 31-29 win in the NFL Kickoff Game.

That spoiled Prescott’s first game since fracturing and dislocating his ankle last October. It was a night that began with his customary shuffle and ended with a warm postgame embrace at midfield with Brady.

“Amazing, amazing,” Brady said of Prescott’s return to the field in an NBC postgame interview. “And that’s what sports are all about. They push us to understand who we are, what our character is out there. He had a long rehab and missed a lot of the preseason and came out and played a hell of a game.”

Prescott later revealed that he told Brady, and his Cowboys teammates, that they would see the Bucs again.

“That’s just the confidence that I have in this group, and the expectations I have,” he said. “This is a playoff team that’s going to make a big push this year.”

They can certainly fulfill that postseason promise with Prescott returning to form. His 42 completions and 58 attempts tied career highs. Dallas ran the ball just 18 times, including four scrambles by Prescott. It was the product of an overwhelming defensive front eliminating the Cowboys’ rushing attack coupled with Prescott exhibiting caution with his legs.

His right arm, however, picked up precisely where it had left off during last year’s record-breaking start.

The sixth-year veteran threw for 403 yards and three touchdowns, picking apart an experienced Tampa Bay defense with a slew of short and midrange throws. Perhaps his finest throw was a deep ball over the middle to CeeDee Lamb that was threaded between multiple defenders but intercepted after it caromed off the wideout’s hands and into Carlton Davis’.

Amid all the dropbacks, Prescott was sacked just once. Despite missing four weeks of practice, he connected twice or more with eight different receivers. He also withstood a fair share of hits and lost some skin on his non-throwing hand. His heroics singlehandedly kept the Cowboys within one score for most the night, while a pair of Greg Zuerlein field goals gave Dallas leads that it would surrender a minute later each time.

“We came up short, bottom line,” Prescott said, before lamenting not getting the offense into the end zone at least one more time. “Obviously, we fought hard, we fought all the way to the end.”

This was also a beginning, of course. And save for defeat, Prescott’s play in it couldn’t have been more encouraging.

“I mean, this is who he is,” Cowboys head coach Mike McCarthy said. “I never thought that he couldn’t have that kind of night. You got to remember, he’s 24-7 football, he puts a tremendous amount of extra effort into this.”

For weeks, Prescott had been pressed about the state of his right ankle and right arm, and he swore he was just fine. Turns out, he’s even better than that.