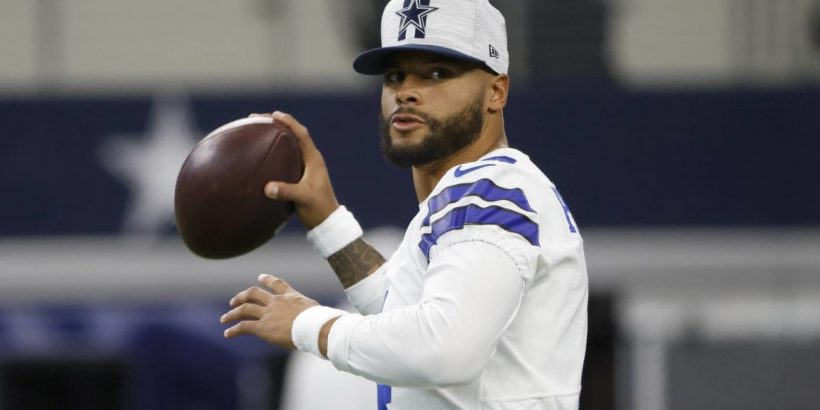 Thursday night’s 2021 kickoff between the Tampa Bay Buccaneers and Dallas Cowboys ushers in the return of quarterback Dak Prescott﻿, 333 days since the quarterback suffered a gruesome dislocated ankle.

Following multiple surgeries, grueling rehab and a shoulder issue setback during training camp, it’s been a wild ride since the last time Prescott commanded the huddle.

“Obviously, I have high expectations for myself,” Prescott said, via Jon Machota of The Athletic. “I plan to come out starting fast. I’ve said before, I don’t necessarily want the numbers that I had that early because we weren’t winning games and we weren’t being competitive early, and that’s why some of those numbers came about. I plan to come out better than I was last year, to be honest. That’s just the work that I’ve put in going all the way back to February when I got back on the field. I’m excited for it.”

It’s easy to forget that Prescott was on record pace before the injury struck. In fewer than five full games, the QB threw for 1,859 yards and nine touchdowns. The 371.2 yards per game is an outrageous figure — one that includes playing less than three full quarters in the fifth game. If he had continued on that pace and stayed healthy, he would have tossed for 5,939 yards over 16 games.

As Prescott noted, much of that production came due to a porous defense that couldn’t stop a nosebleed if it’d had 20,000 boxes of tissues. The Cowboys defense didn’t improve throughout the 2020 campaign, so it’s safe to assume that Prescott might have kept up that torrid pace if not for the injury.

Despite concerns about his shoulder, Prescott believes he’s ready to dive right back in and lead an offense that has the weapons to be among the most explosive in the NFL.

“I’m ready,” Prescott said. “I’m definitely ready. I’m excited. I put in a lot of work to get to this point. Whether it was months ago, just rehabbing the ankle, to the last few months keeping the feet working while I let my arm rest. There is so much work I put into this I’m just excited to go out there and be a part of the full game. Just being out there with my brothers and getting to do something I love.”

Facing a Super Bowl champion defense with a dominant defensive line in Tampa provides Prescott a difficult test off the bat. For the first time in almost a year, the Cowboys quarterback is preparing to get hit.

“I mean, I’m excited for when that moment comes, but I wouldn’t say I’m eager,” Prescott said of the first time he’ll get hit since the injury. “I think it’d be great to come out of that game not touching the ground, but how realistic is that? Obviously, it doesn’t sound very realistic. But I’m just excited for that moment, just to get it out of the way, after 11 months without being hit. I’m just excited for everything this game entails, from warmups, to pregame, to the first whistle to the last, and everything in between.”

The first time Shaquil Barrett﻿, Jason Pierre-Paul﻿, Ndamukong Suh﻿, Vita Vea, William Gholston﻿, Devin White﻿, Lavonte David﻿, or another Bucs defender plants Prescott, Cowboys fans will hold their breath. They saw what happened to their season the last time the QB got hit. So when he gets up from taking his first smash in 2021, it will mark the moment Dak’s fully back.