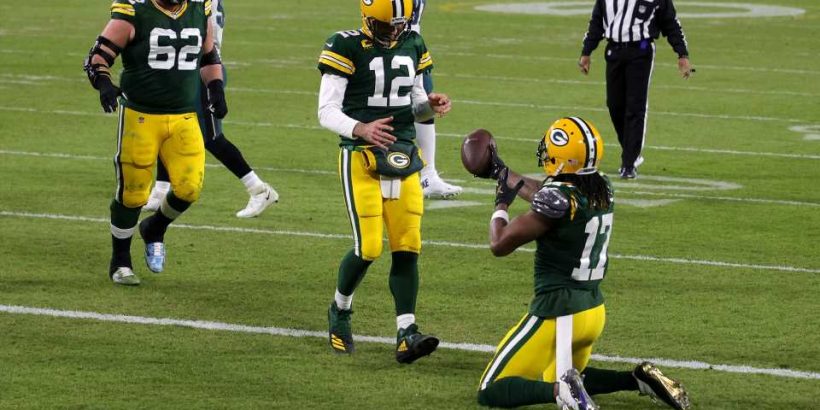 Davante Adams is going to be ready to play this 2021 NFL season — whoever his quarterback may be.

Adams, Aaron Rodgers’ No. 1 receiving target and running mate in Green Bay, has been watching the rift between his superstar quarterback and the Packers organization grow since last year, and he doesn’t seem to have too much confidence

Speaking on “The Peter King Podcast” with NBC Sports’ Peter King, Adams said he’s spoken with Rodgers a bit amid all the Packers-Rodgers drama and offered some insight on what’s been going down.

I mean, it’s been tough, man. I’ve obviously spoken to him a little bit. Can’t really share too much of what we’ve talked about. It’s just something that’s part of this business — you’ve got to keep people happy. It’s tough because you have so much time invested in one place and you’ve done so much for one place, you just kind of hope to see that respect reciprocated, I guess you could say. When it doesn’t work out exactly how you want, you have issues like this. But we’re just being positive, I’m just sticking to my training, doing what I have to do to put myself in a position to be ready — whoever my quarterback is come the season. Hope and praying that it’s still Aaron, just so continue what we’ve had going this whole time, but just gonna continue working to see how this plays out.

While Adams did a fair amount to skirt the issue, note this point: “Whoever my quarterback is” is certainly not nothing. Adams also said that “you’ve got to keep people happy,” seemingly indicating that the Packers may not have done enough to keep their star quarterback satisfied.

King questioned whether Adams has a gut feeling to whether Rodgers will be back in Green Bay come the start of the season, and Adams couldn’t offer affirmation one way or the other.

“I don’t (have a feeling), man. Just trying to be positive,” Adams said. “Just keep my mind off it. I don’t even want to bring anything else into this universe. Just trying to think good thoughts and kind of downplay it in my head and just hope that at some point it just goes back to normal and we show up to camp and everybody’s ready to rock.”

Rodgers has reportedly made it abundantly clear that he doesn’t want to play another snap in Green Bay, with a caveat: Should GM Brian Gutekunst be shown his walking papers, Rodgers may walk back to Lambeau Field.

But, as of May 11, that doesn’t seem like it’s happening: Both Rodgers and the Packers seem dug in, with reports of the 49ers, Broncos and Raiders as potential landing spots. The 49ers’ selection of Trey Lance in the 2021 NFL Draft will likely take them off the board, though.

For now, Rodgers, the Packers, Adams and everyone else will just have to wait and see how this plays out.