Derrick Henry has bulldozed the Tennessee Titans to a spot in the AFC Championship game, but how has he arrived at the best period of his career?

In a game full of intricate play-calling, incisive passing and agile receiver routes, Henry has been an advocate for the ever-present value of brute power.

The New England Patriots and Baltimore Ravens are nursing the bruises to prove it.

His awe-inspiring physical stature and sheer strength is nothing new, evidenced quite brilliantly by the viral photograph of Henry overlooking a vertically-inferior Mark Ingram at college.

With his stunning playoff form in mind, we have taken a look at his career so far…

How did he get here? Henry played at Alabama for three years between 2013 and 2015, with his freshman year ending in him being nicknamed ‘El Tractorcito’, meaning ‘The Little Tractor’, by a Spanish broadcaster.

Having played behind T.J. Yeldon in his second season, Henry became starting running back in his junior year when the now-Buffalo Bills back was taken by the Jacksonville Jaguars in the second round of the 2015 draft.

Henry went on to break Shaun Alexander’s record for most career rushing yards in Alabama history as he finished the season with 2,219 yards on the ground for 28 touchdowns off 395 carries.

That feat was achieved in the 2016 National Championship game thanks to Henry’s 158 yards and three touchdowns, marking another significant stride towards him winning the Heisman Trophy ahead of now-Carolina Panthers running back Christian McCaffrey and now-Houston Texans quarterback Deshaun Watson. 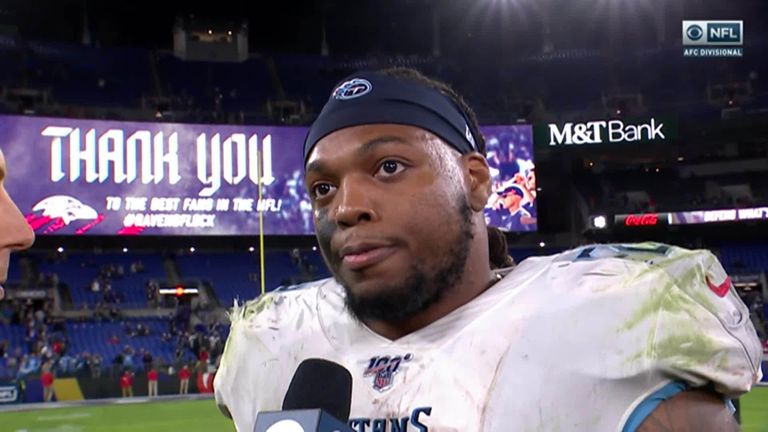 By the time he entered the 2016 draft Henry had recorded 3,591 rushing yards for 42 touchdowns across his time at Alabama, with analysts deeming him the second best back on the board after Ezekiel Elliott, who would go to the Dallas Cowboys at No 4.

“Effective in zone, gap and power schemes. Rarely fatigues and wears down defenses as game goes on.”

His size naturally welcomed doubts over his acceleration and versatility, with the breakdown of his weaknesses stating: “With almost 400 touches this year, scouts are concerned about his workload. Tall, long-strider who takes time to build up his speed. Average foot quickness can lead to tackles for losses if he gets too cute in the backfield.”

He was notably described as ‘more run-finisher than tackle breaker’ – an assessment he has arguably diminished since then.

Life in the NFL 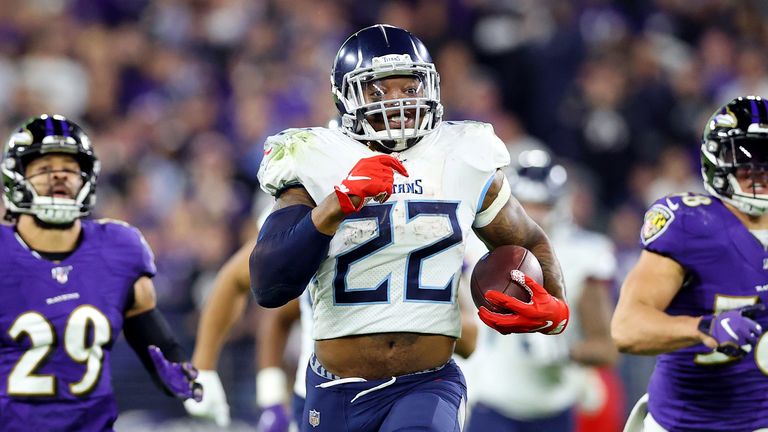 As expected, Henry was the second running back off the board as he was selected by the Titans in the second round as the 45th overall pick, eventually signing a four-year, $5.4m deal.

His rookie year entailed an understudy role behind DeMarco Murray that amounted to just two starts and 110 carries for 490 yards and five touchdowns across 15 games.

Henry’s workload increased the following year as he led the Titans in rushing yards with 744 for five touchdowns from 176 carries, including a career day of 156 rushing yards for one score in Murray’s absence against the Kansas City Chiefs in Wild Card weekend. 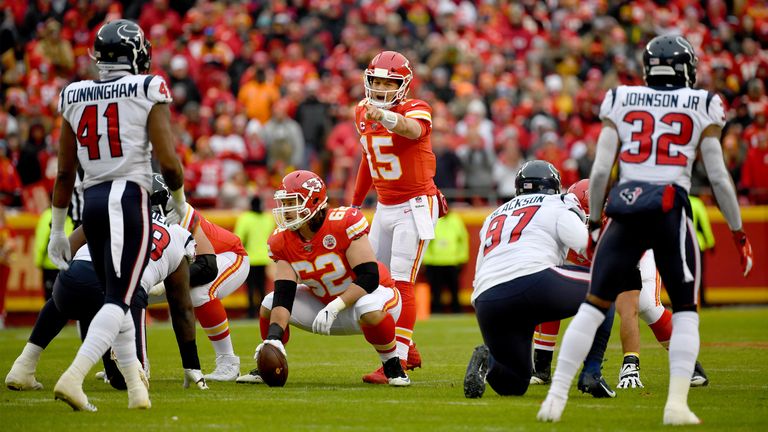 Murray’s retirement in 2018 paved the way for Henry to inherit the main bulk of snaps in the backfield, resulting in his best season yet with 1,059 rushing yards and 12 touchdowns from 215 attempts on the ground.

The season saw him tie Tony Dorsett for the longest touchdown run in NFL history with a 99-yard burst on his way towards a franchise-record 238 rushing yards against the Jaguars. 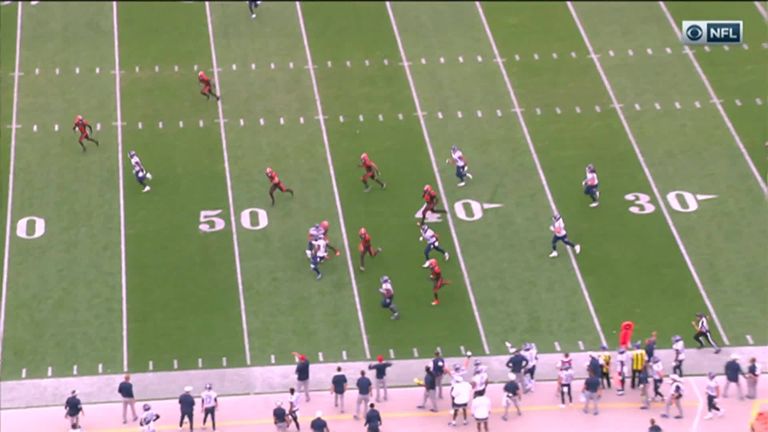 Henry enjoyed an unspectacular start to the 2019 season as he was held to under 100 rushing yards in eight of his first nine games, the exception being 100 yards in the Week Four win over the Atlanta Falcons.

He came to life in the 35-32 win over the Chiefs in Week 10, rushing for 188 yards and two touchdowns off 23 carries to kick start a devastating finish to the year.

The Jags became his next punch bag the following game when Henry pounded to 159 yards rushing for another two touchdowns in a 42-20 victory.

Then came 149 rushing yards and another score in the 31-17 win over the Indianapolis Colts and 103 yards for two touchdowns as the Titans beat the Oakland Raiders 42-21.

He was limited to just 86 yards in the 24-21 defeat to the Texans next time out, before finishing the regular season with 211 yards for three touchdowns to lead Tennessee to a 35-14 win upon their return to Houston. 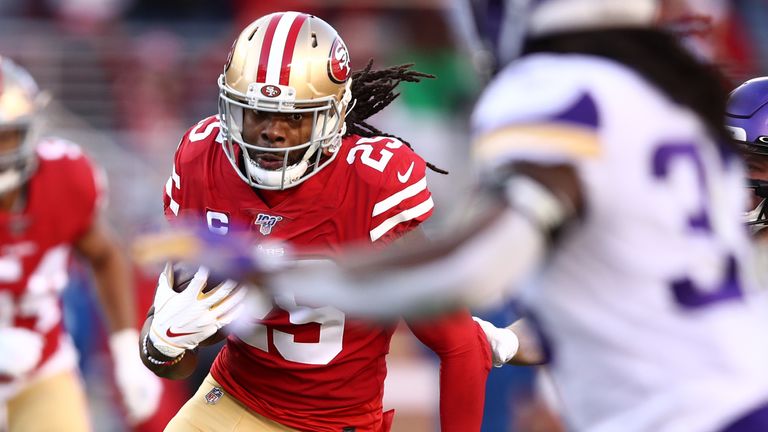 His bullish form carried into the post-season and fuelled an instrumental role in the Wild Card triumph over New England, who gave up 182 yards rushing and a trip to the endzone to the 26-year-old.

Henry consigned Baltimore to a similarly torrid day with 195 yards on the ground to crush popular predictions of Lamar Jackson and the Ravens cruising to Miami.

Any doubts over his ability to shoulder a heavy workload have been quashed by his 96 carries over the last three games.

In leading the Titans this deep into the playoffs he has also challenged the norm as far as the role of running backs in the playoffs is typically perceived. The timing of Henry’s eruption could not be more perfect as he prepares to enter the offseason as an unrestricted free agent.

That likely means the Titans are about to stump up some eye-watering money, or risk seeing another team throw a bumper contract at the Pro Bowler.

Should Henry lead his team to a Super Bowl the Titans may be forced to overlook the usual variables associated with handing lucrative deals to running backs, namely the fear over the longevity for a collision-heavy and injury-prone position.

Le’Veon Bell did not exactly flourish with the New York Jets in 2019, nor did Todd Gurley inspire the Los Angeles Rams in the manner he had the previous year. But with Henry there is a different feeling.

To break out three years down the line begs the question as to what he is truly capable of with the right direction, which Mike Vrabel appears to have discovered with him.