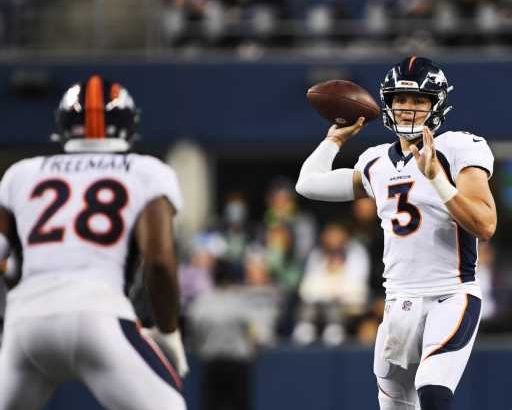 Ten notes and observations from the Broncos’ 30-3 win over Seattle on Saturday night:

3. Notable defensive playing time leaders: The starters who were available played from 4-10 snaps (two possessions). On the third snap, inside linebacker Justin Strnad was picked by receiver Penny Hart, allowing running back Rashaad Penny to gain six yards on a catch to the right flat. The first drive ended with safety Justin Simmons’ interception when quarterback Alex McGough tried to loft a pass over Simmons. The second drive was a three-and-out — outside linebacker Bradley Chubb got the coverage sack in 4.44 seconds.

4. Javonte Williams began the Broncos’ second drive with gains of eight and six (missed tackle behind the line of scrimmage) yards. On the next play, running back Royce Freeman made a Seahawks defender miss to gain 17 yards on a pass to the right flat.

5. On Bridgewater’s second series, the Broncos wanted to take a shot on first down from the 45. They called play action and had a seven-man protection, but Bridgewater was under pressure after linebacker Kerry Hyder split the blocking attempts of tight ends Noah Fant and Andrew Beck. Bridgewater held the football for 4.88 seconds before flipping it outside to Freeman for 11 yards.

6. Defensive lineman DeShawn Williams was a one-man wrecking crew during his 13 snaps of work. During a span of three consecutive plays on Seattle’s third series, he beat right guard Phil Haynes for a run “stuff,” dodged right tackle Tommy Champion for a run “stuff,” and recovered the fumble caused by outside linebacker Jonathon Cooper’s strip-sack. On the next possession, Williams identified the screen pass, got in the way of Penny and made the interception as he was falling to the turf.

7. Lock’s first series was a three-and-out. Defensive tackle Jared Hewitt rushed unblocked for the sack in 2.47 seconds on second down and defensive end Rasheem Green beat left guard Netane Muti for the sack in 3.14 seconds on third down. More positive was Lock running the two-minute offense to end the first half. Starting at his 33 with 1:02 left, Lock was 5-of-8 passing for 41 yards to set up a field goal. Lock’s best throw was a 19-yard dart to receiver Diontae Spencer on third-and-6. Lock’s final throw of the game was 34 yards to receiver Seth Williams (4.38 seconds) when he was flushed from the pocket and flipped it to Williams. Three plays later, on third-and-2 from the 6, right guard Austin Schlottmann stepped on Lock’s foot as he left from under center. Lock said it was the first time that’s happened to him.

9. Punter Sam Martin’s third-quarter attempt was partially blocked by the Seahawks’ DeeJay Dallas, who used a quick inside move to beat Beck. It was a woeful night for the Broncos’ special teams, which allowed kick returns of 45 and 30 yards. “The coverage units in particular (is a concern),” Fangio said. “(Seattle) had a nice kick return on us and another one that didn’t go quite as far and a deflected punt. As good as we were playing, those things can ruin a game for us.”

10. Cooper went right around Champion on Seattle’s final offensive play, getting the sack in 2.37 seconds.