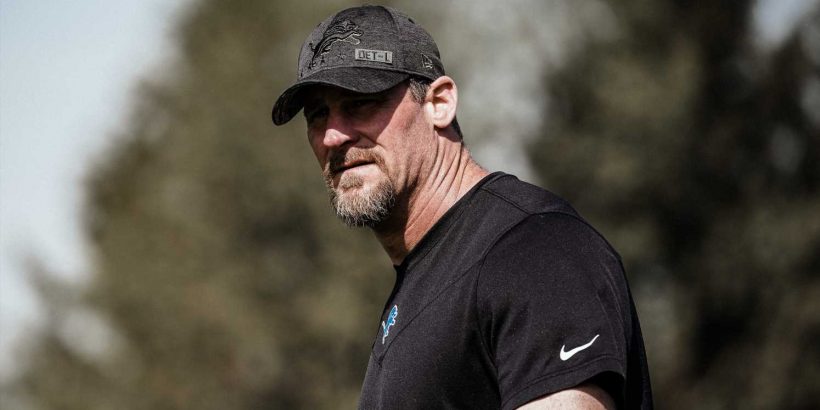 We're pretty sure he was joking, but Detroit Lions coach Dan Campbell said on the "Pardon My Take" podcast Monday that he asked Lions owner Sheila Ford Hamp about getting a pet lion to keep at the team's Allen Park practice facility.

"I don’t think we’re going to be able to do it, but I would love to literally just have a pet lion," Campbell said. "Just a legit pet lion on a chain, a big ass chain, and he really is my pet. We just walk around the building, we go out to practice, we’re at seven-on-seven, we’re behind the kicker when he’s kicking."

Campbell shared his idea after the podcast hosts discussed motivational ideas they had for the Lions, some of which they shared with Campbell's predecessor, Matt Patricia.

One idea Campbell seemed especially fond of was putting a taxidermied sheep at the front of the Lions practice facility and encouraging players to not look at it, to reiterate the old saying that a lion does not concern itself with the opinions of sheep.

"I actually like that," Campbell said. "That’s actually pretty good, man. I’m not lying to you. That’s pretty good."

As for his idea about keeping a pet lion, Campbell joked that, "on command, you could train him like if one of your groups isn’t doing well you could just take him over to their section and just have it take a dump right there in the middle of where their section is at and then bring him on back. I mean, think about it. It’d be outstanding."

"We’re going somewhere," Campbell said. "The problem, I don’t know if PETA’s going to allow that. Even though we would take great care of it. It would be fed well, it would be petted, it would be manicured. I might end up losing an arm because of it, but that would be even better because it would validate what, this is a freaking, this a creature now. This is an animal. This thing, this is from the wild."

Asked if he would give up an arm to win a Super Bowl, Campbell, who is entering his first season as full-time head coach, said, "yes."

Easily one of the most colorful coaches in the NFL, Campbell spent 36 minutes on the podcast Monday discussing a number of topics both serious and fun.

He said he was on an airplane flight once when his appendix ruptured. Not wanting to miss the next day's conditioning test, he asked trainers for medicine to control the pain only to later have to go to the hospital.

"It’s not like my guts blew open or something," Campbell said.

He listed his top rock/metal bands of all-time as Metallica, Lynyrd Skynyrd and AC/DC, with Led Zeppelin and Pantera close behind.

He complimented Patricia and former Lions general manager Bob Quinn for the "turd"-free roster he inherited.

"Here’s what a turd is," Campbell said. "A turd is somebody that’s constantly getting in trouble off the field, he does not love football, he’s not very smart, he doesn’t care about studying, he's not a team guy. He’s got major ego problems. That’s a football turd, man. You don’t want to deal with it. It’s not worth it. So that’s what I meant, and I’m telling you the roster, when we walked in — I will say Bob Quinn and Patricia did a damn good job with who they brought in. Because really there are good guys here. We don’t have any of those guys."

"My heart does lean towards big guys, believe me, man, the guys in the trenches, because I still believe you win and lose there," Campbell said. "I just do deep in my soul. However, leading up into this, we did know that Sewell was one of if not the best prospect in this draft. That’s what we really believed, so just for the player that he was, it was hard to ignore that. However, we were not shut off to, we were going to take the best player available on the board."

Campbell said the Lions did not think Sewell, who is expected to start at right tackle this fall, would make to Pick No. 7.

"We were hopeful, but we didn’t think he would," Campbell said. "But man, we want to take the best player in that position is what we wanted to do. So listen, we were prepared now to take a receiver. I mean, that’s — we had no problem with that. If he was the best one on the board because Sewell was gone, we would have taken him, no problem."