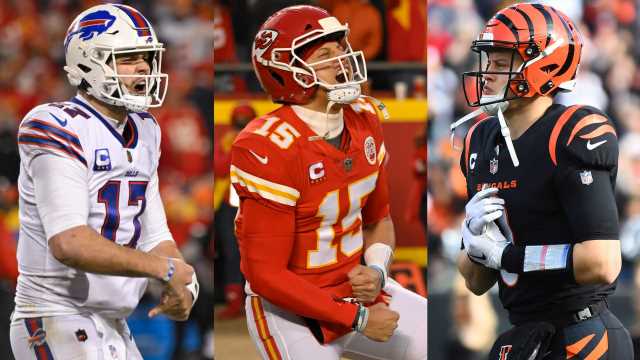 By Sunday night, in the aftermath of one of the greatest quarterback duels of all time, Joe Burrow was relegated to afterthought status. While Patrick Mahomes and Josh Allen got the Manning-vs.-Brady treatment as the future of the sport, I imagined Burrow relaxing somewhere in his tinted sunglasses thinking, I’m sitting right here, guys.

If the story of the regular season at quarterback was about the old guard sustaining excellence at the top one last time, the young guys have taken over in January. It’s an AFC story.

Mahomes took everything that stymied him throughout the regular season, processed it and evolved. In Sunday’s instant classic, the Chiefs star refused to force plays that weren’t there with the Bills safeties playing deep all game. He didn’t throw a pass over 20 air yards for the first time all season. He made quick decisions when they were available, including during the most famous 13-second drive in NFL history. He held the ball forever on other plays, waiting for teammates to come open; his time to throw was higher than it’d been for much of the season.

Mahomes also scrambled more often than normal, threw from all of his arm angles only when he needed to and ultimately led the Chiefs to a whopping 30 first downs, all against the league’s purported No. 1 defense. For all the great designed runs Allen pulled off Sunday night, looking like a mix between Cam Newton and Jeremy Shockey, Mahomes had more rushing yards. Mahomes ran more this season overall because he needed to — and turned it up in the playoffs again, eclipsing 50 yards rushing on Sunday for the third time in 10 career playoff games.

When Mahomes is cooking, the game around him moves in slow motion. After a regular season in which he often looked uncomfortable, even frantic, Mahomes’ control of Sunday’s contest — whether in structure or improvising — was uncanny. The first game this season in which this felt completely true was the Chiefs’ 34-31 loss to the Bengals in Week 17. I wrote after that game that I was higher on the Chiefs’ championship hopes than at any other point this season because Kansas City’s offense was back. Mahomes backed that up with two nearly perfect playoff performances.

Bills-Chiefs was yet another reminder that great offense and great quarterbacks will dominate highly-ranked defenses in today’s NFL when it matters most. It happened in the 2018 AFC Championship, another overtime gem. It happened in the 2017 Super Bowl duel between Nick Foles and Tom Brady. It happened Sunday in Kansas City, just like it happened during Chiefs-Bengals back on January 2.

Burrow has already proven he can out-duel a peaking Mahomes. After playoff tilts against the Raiders’ and Titans’ pass rushes — games in which Burrow could have little confidence his ragged offensive line would hold up — this Sunday’s matchup shapes up better. The Chiefs are not a good defense right now. Tyrann Mathieu, who was a big part in giving up explosive plays to Ja’Marr Chase during the rookie wideout’s 266-yard, three-touchdown tour de force in Week 17, may not be on the field. Frank Clark has been quiet for over a month. Chris Jones will win his share of reps like he does every week, but that stretch of improved Chiefs defensive play is over. It ended once they started playing some high-level quarterbacks, and Burrow certainly qualifies.

Burrow was better on balance than Mahomes and Allen in the regular season. His lows weren’t as low, and his highs were higher than you think. He skipped steps on the developmental ladder just like Mahomes, elevating those around him. With Burrow, it’s not because of a strong arm or creative arm angles; his timing and accuracy make his teammates better. He started to throw the pass to Chase that set up the Bengals’ game-winning field goal against the Titans well before the receiver broke on his route. When Chase turned around, the ball was there for him to catch in stride before going out of bounds.

Burrow’s superpower this season is his ability to destroy the blitz. He and Chase picked the Chiefs apart this way in the regular-season showdown. Kansas City defensive coordinator Steve Spagnuolo, however, gets antsy when he sees his front four failing to get home. Spags may also see that the Titans blitzed effectively last week, creating confusion up front for the Bengals. The Chiefs’ coverage group, as Allen showed last week, is a streaky unit that can be exploited.

It’s a shame Allen isn’t still alive in the postseason. He reached another level this month, enjoying a two-game playoff stretch that was as dominant as any quarterback run in memory. His developmental story will give raw, struggling signal-callers too much hope for years to come. Because there’s only one Josh Allen.

When Allen came into the league, I was so wrong to believe that his upside was as a poor man’s Cam Newton. Instead, he’s become the improved evolution of Cam, more consistent as a passer and playmaker, with all that power-running ability and the red-zone problems it creates. Still just 25, Allen will get plenty more chances to win the Super Bowl. But even if he never reaches the mountaintop, he’s already proven he’s a championship-caliber quarterback. He was beyond that level in these playoffs, somewhere between the heavens and the unconscious. His defense, his coaching staff and those 13 seconds of infamy stopped him because no opponent could.

There’s a temptation, after watching the Bills-Chiefs fire show, to say that having a quarterback like this is the only way. We know too many exceptions (Nick Foles! These Jimmy G 49ers!) to believe that, but it’s always been the most straightforward way to annual contention. That’s doubly true in an era where offense matters more.

This changing of the guard suddenly feels too on the nose. Brady is considering retirement, and Rodgers, at age 38, may not be far behind. The old guys dominated the regular season, but neither played well in disappointing playoff losses, especially Rodgers.

These AFC playoffs are a cruel reminder that we remember most how you finish, providing a window into a glorious football future where the game’s top talents all appear crammed in one conference.

It’s not just Mahomes and Allen. Justin Herbert was a bit better than both of them in the regular season and is just as talented. Lamar Jackson won the 2019 MVP and started this season stronger than ever.

And then there is Burrow, who has beaten expectations every step of the way this season. The assumption is that he can’t match what Allen just did in Arrowhead and that the feel-good Bengals will finally be exposed.

One week after the football world marveled at the greatest quarterback playoff bout of our lifetime and pondered what it meant for the sport, Burrow will have a chance to render that game a footnote in his story. The future of the AFC is not just about two quarterbacks and, well, it’s not the future. It’s here. And Burrow isn’t the type to wait his turn.

The Air Index presented by FedEx evaluates NFL quarterback performances all season long. Cast your vote for the FedEx Air Player of Year.