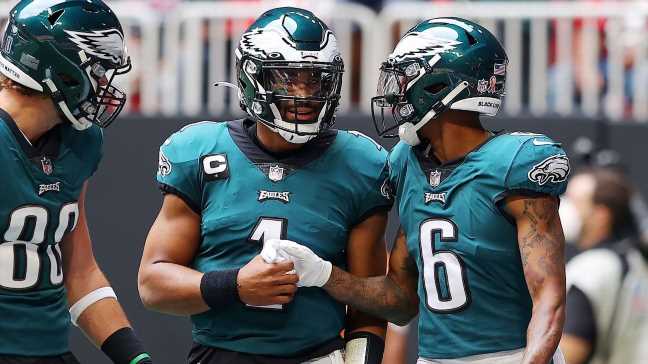 ATLANTA — The Philadelphia Eagles got immediate returns on their No. 10 overall pick in April’s NFL draft, as wide receiver DeVonta Smith scored on the team’s first drive of the season against the Atlanta Falcons on Sunday.

Credit the play design of first-year head coach Nick Sirianni, who had tight end Zach Ertz run a natural pick, freeing Smith up down the left sideline for an 18-yard touchdown from quarterback Jalen Hurts.

The touchdown put the Eagles up 7-3 with 6 minutes and 17 seconds left in the first quarter.

Smith, the reigning Heisman Trophy winner, missed multiple weeks this summer with an MCL sprain, but the coaching staff had confidence he and Hurts would be on the same page, thanks in part to the chemistry they built when they played at Alabama together.

It appears they were right.

Smith is the third Eagles wide receiver since the NFL merger (since 1970) to record a receiving touchdown in his first NFL game, joining Cris Carter and Marvin Hargrove, according to ESPN Stats & Information research.