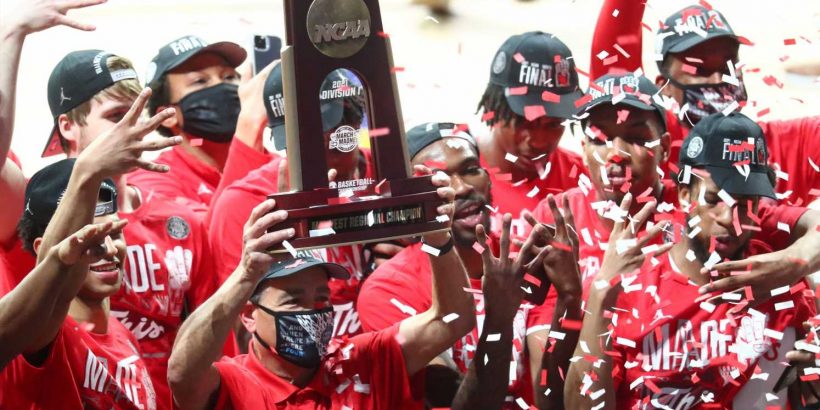 Houston fed off its nation-leading defense Monday night – putting the clamps on Oregon State star Ethan Thompson – and held off a late rally by the No. 12 seeded Beavers to escape with a 67-61 win in the Elite Eight in Indianapolis.

The Cougars are the first team to advance to the men's Final Four, getting to college basketball's final weekend for the first time since the Phi Slama Jama era in 1984.

Houston (28-3), which leads the country in field goal percentage defense and limits opponents to 57 points a game, offset Oregon State's high-octane offense from the start. American Athletic Conference defensive player of the year DeJon Jarreau smothered Thompson – the Beavers' star in their first three NCAA Tournament upsets to reach the Elite Eight – containing him to 11 points on 3-for-12 shooting. Thompson had averaged 24 points in the last two wins. Jarreau's steal on Thompson with 48 seconds left helped seal the win.

Oregon State didn't go away quietly, storming back from a 17-point deficit, tying the score at 55 off a Gianni Hunt three-pointer with 3:48 remaining. Quentin Grimes, Houston's leading scorer, came up strong in the clutch with two dagger three-pointers late – including one with 3:22 left to give the Cougars a 58-55 edge. Grimes hit two free throws with 28 seconds left.

Houston's offense was bolstered by Marcus Sasser's hot three-point shooting early (five triples for 20 points) and got a momentum boost from Fabian White Jr., who grabbed key offensive rebounds late in the game. The Cougars capitalized off 19 offensive rebounds, scoring second-chance points to make up for an otherwise pedestrian shooting night (32%).

The Houston Cougars huddle during the second half in the Elite Eight of the 2021 NCAA Tournament against the Oregon State Beavers at Lucas Oil Stadium. (Photo: Mark J. Rebilas, USA TODAY Sports)

The loss concludes the Beavers' storybook March Madness run, which started with a Pac-12 tournament win for the league's automatic qualifier ticket. They upset No. 5 Tennessee, No. 4 Oklahoma State and No. 7 Loyola Chicago to become just the second No. 12 seed to get to the Elite Eight.

Sampson returns to the Final Four after previously taking Oklahoma there in 2002. He piloted Houston to the Sweet 16 in 2019 in a 33-win season.