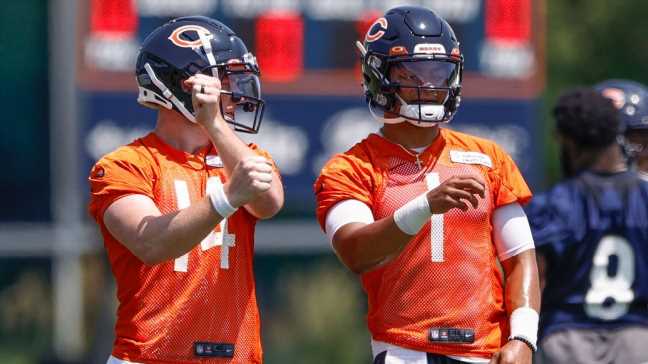 Fields, drafted 11th overall by the Bears, said on Thursday that he embraces the developmental timeline set for him by the organization. Head coach Matt Nagy stated earlier in the week that — barring an injury or something else unforeseen — veteran Andy Dalton would open the regular season as Chicago’s starting quarterback.

Nagy announced at the beginning of the offseason program that Dalton is No. 1 on the Bears’ quarterback depth chart followed by Fields and veteran Nick Foles. The coach has not wavered on that despite enormous public pressure to play Fields immediately.

“Promises can get pretty crazy, but what we told Andy is that he’s our starter, and he knows that and that’s what Justin knows, that’s what Nick knows … so, that’s where we’re at,” Nagy said Tuesday.

“Our coaches understand that we all get excited about Justin Fields. We’d all be lying if we said something different. With that said, we’re excited about Andy Dalton too. And we know that if we stick to this plan that we have, that everything is going to be just fine.”

The city of Chicago, starved for a true franchise quarterback since Hall of Famer Sid Luckman retired in 1950, is understandably clamoring for the Fields era to begin.

The Bears are lightly tapping the brakes. For all of Fields’ impressive physical traits and eye-popping college accomplishments, the Ohio State product has been candid regarding the finer details of playing quarterback in the NFL that he still needs to iron out — most notably calling plays from inside the huddle.

“That’s probably the biggest step up because at Ohio State we pretty much went no-huddle like 90-95% of the time,” Fields said. “Really, basic mechanics, getting in and out of the huddle, making sure I’m on top of everything and just getting every little detail right.”

Dalton, entering his 11th NFL season, offers the Bears much more in the experience category.

“Some of the stages that we’re at right now, which is very normal for a rookie, that we’re going through with Justin — Andy has already conquered that,” Nagy said “And it’s easy for him. That’s natural. That’s not something that we sit there and applaud him 100 times a day because he did it. That’s supposed to happen. So the offense, he has completely. He really has it down. So I think now it’s just trying to come to us and tell us what he likes and doesn’t like and now we fit all of that together.”

One bonus: Dalton has worked hard to mentor Fields and help the young quarterback prepare for when his time inevitably comes.

“I’ve learned a lot of things [from Dalton],” Fields said. “I mean, he’s talked to me a lot. I actually went to dinner with him and his wife. I mean, Andy and Nick, they’ve been awesome, probably bigger than you guys even know. Andy has just completely taken me under his wing. Any question that I have for him, he’s going to answer, even when I’m throwing. I think there was one day after OTAs, I was throwing extra after practice and he stayed out there specifically to see maybe what I was doing wrong. He was just trying to help me out.

“I’ve been in a situation like this [entering the season as a backup] before, and all I did was get better. So I feel like you can control what you can control and come to work every day with a positive attitude and a want to get better, then there’s no stopping you. I think when that time comes, when I do get my opportunity, then I just would like to be ready for that moment.”