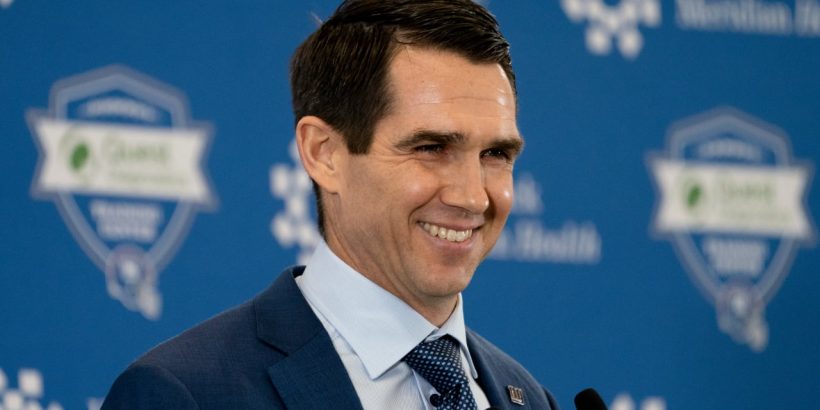 The New York Giants’ new general manager isn’t planning on shaking up the quarterback position, at least not right away.

Joe Schoen, hired from the Buffalo Bills last week, spoke on two critical areas for the G-Men in a news conference Wednesday: quarterback Daniel Jones and the salary cap.

“I’ve looked at Daniel. Once the new staff gets in here, we’re going to get together — offensive coordinator, head coach, the entire staff — dive into the film as a group and look at what Daniel does best and we’re going to try to allow him to put his best foot forward,” Schoen said of Jones, who was in attendance at the news conference. “I’ve looked at him. I wasn’t here in the past, so I don’t exactly know what he was told to do, but I do know this: I know he’s a great kid. He’s been in this building the last two days. I’ve talked to him. There’s not anybody in this building that’s said a bad word about his work ethic, passion, desire to win, and I think you’ve got to have those traits as a quarterback. The kid has physical ability. He’s got arm strength, he’s athletic, he can run. I’m really excited to work with Daniel.

“Again, when the new staff gets in here, we’ll build an offense around Daniel to accentuate what he does best.”

A lot, however, has already been built around Jones — from 2020 first-round pick Andrew Thomas at left tackle to 2021 first-round pick Kadarius Toney at wide receiver, plus a lucrative free-agent deal for wide receiver Kenny Golladay﻿. But the Giants were only 4-7 with Jones at the starting helm in a 4-13 season. He threw more than one touchdown pass just twice on the year, and NFL Network analyst Marc Ross, formerly of the Giants’ front office, recently suggested the club should not pick up the fifth-year option on Jones’ contract. He enters his fourth season in 2022.

Pass protection has been a problem since Jones’ arrival however — a key reason the club drafted Thomas with their first selection in 2020 — and Giants co-owner John Mara issued support for Jones as well.

“We’ve done everything possible to screw this kid up,” Mara said, per NFL Network’s Mike Garafolo.

Mara underscored his intention to show continued patience with Jones’ development by dismissing the notion that the Giants might be interested in trading for Houston Texans QB Deshaun Watson﻿. Mara cited salary cap issues, as well as Watson’s ongoing legal problems stemming from 22 civil lawsuits, and concurrent NFL and law enforcement investigations, related to sexual misconduct.

“We’re not trading for Deshaun Watson,” Mara said. “There are so many reasons why we wouldn’t do that. Cap-wise, we couldn’t afford it, but more importantly with the allegations that are out there right now, that’s just not the right fit for us.”

Along with a question mark at the quarterback position, Schoen also inherits a dismal situation where the salary cap is concerned. The Giants are about $7 million over the cap for 2022, which doesn’t bode well at all for any sort of a splash addition in free agency.

“It’s a concern and it’s real … There are going to be difficult decisions that have to be made,” Schoen said, per SNY’s Ralph Vacchiano.

Schoen noted the club has a robust 11 selections in the upcoming draft. If the club can’t improve much in free agency, an infusion of youth will have to make up the difference. And whomever the Giants select as their new head coach, Schoen said, will need to be a keen developer of the rookie class.

“It’s going to be important that some of those young players may have to be major contributors in 2022, so the willingness to play young players (is important),” Schoen said.