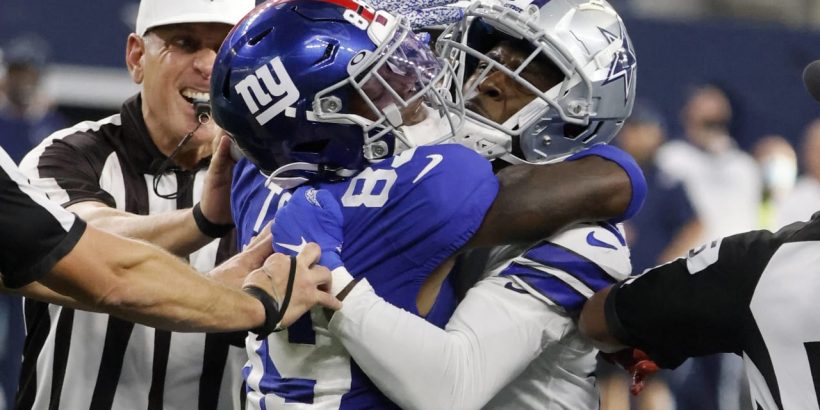 The punch that got New York Giants receiver ﻿Kadarius Toney﻿ ejected from Sunday’s 44-20 loss to the Dallas Cowboys will hit the rookie’s wallet but isn’t likely to cost him a game.

NFL Network Insider Ian Rapoport reported Monday morning that Toney would be evaluated by the league office for a likely fine, but no suspension is expected.

Toney was ejected late in the Giants’ blowout loss in Dallas after swinging a punch at Cowboys safety ﻿Damontae Kazee﻿. The WR appeared to be attempting to defend teammate ﻿Evan Engram﻿ who was in the middle of a scrum.

After the game, coach Joe Judge was asked about Toney’s punch.

“Look, there’s a pretty distinct line in terms of competing and doing the things we’re not going to condone as a team that put us behind,” Judge said. “That’s not going to be accepted. It’s not going to be condoned. That’s as far as I’m going to go with that. Obviously, it resulted in him leaving the game and I’m just going to leave it at that right now.”

Toney avoiding league suspension is big news for Big Blue, given how decimated their wide receiver corps currently sits. ﻿Sterling Shepard﻿ and ﻿Darius Slayton﻿ missed the game with hamstring injuries. ﻿Kenny Golladay﻿ then exited Sunday due to a knee injury.

The ejection marred what was a massive breakout game for Toney. The first-round wideout was unstoppable for stretches Sunday, displaying dynamic run-after-catch ability and sticky hands en route to a 10-catch, 189-yard day.

“I think he’s being very productive,” Jones said of Toney. “He’s a very talented player. I’ve said for a number of weeks, especially at that position, the receiver position, it takes some time to learn. There a lot of difference coming from college to the League for those positions. These guys obviously have a lot of, just, natural ability. He’s building a lot of technique, a lot of savvy. He’s really understanding what the other teams are giving him. He’s making plays. He was highly productive for us today in terms of making plays, getting down the field. He’s a tough dude, I don’t think there’s any question about that and I think he’s a very smart football player.”