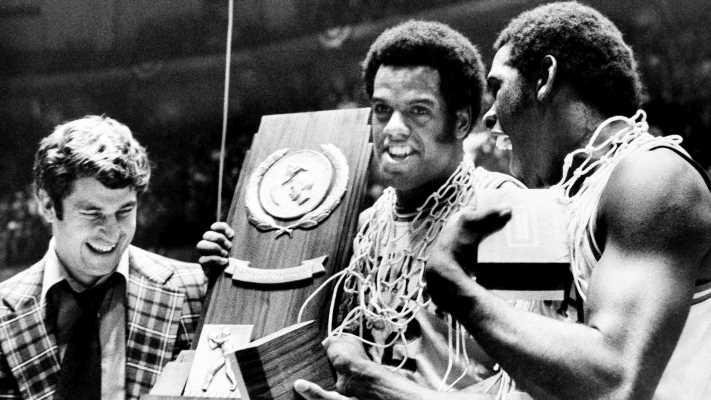 You’ve undoubtedly heard this a lot over the last three weeks, but the last Division I men's team to finish the season undefeated was Indiana in 1976. Those Hoosiers were the seventh undefeated NCAA Tournament champion. It hasn’t been done since, though a few, including this year’s Bulldogs, had a shot at it entering the tournament.

But the 1985 expansion of the field to 64 teams meant six wins are required to claim the title, and no one has managed it. Even that terrific Kentucky team in 2015 met its match in the Final Four against Wisconsin.

On a couple of other occasions, an unbeaten squad made it all the way to the last day of the season before tasting defeat. Larry Bird and Indiana State were stopped in the championship game by Magic Johnson and Michigan State in 1979, and Ohio State suffered its lone loss in the final to Cincinnati in 1961

Before we list the seven undefeated NCAA champs, however, we should note that in 1939, Long Island University posted a 24-0 record culminating with the NIT title, in an era when that tournament carried more weight than the fledgling NCAA tourney. With that out of the way, here are the seven whose records remained unblemished. Spoiler alert: four of them were the same school.

1956, San Francisco – Bill Russell actually led the Dons to two national titles, but USF lost once early in the 1954-55 campaign to UCLA before claiming its first crown. The second championship run concluded with an 83-71 win against Iowa to finish a perfect 29-0.

1957, North Carolina – Just a year later, Frank McGuire coached the Tar Heels to a 32-0 campaign. His team had to work overtime to do it, though – a lot of overtime. UNC outlasted a Kansas team featuring Wilt Chamberlain 54-53 in three extra sessions. The Tar Heels also needed triple-OT to get past Michigan State in the semifinal.

1964, UCLA – And so we come to the John Wooden era. This would be the first of the Wizard of Westwood’s 10 title teams. This one features Walt Hazzard and Gail Goodrich, who closed out a 30-0 campaign with a 98-83 triumph against Duke in the final.

1967, UCLA – This was the first of three championships for the Bruins with Kareem Abdul-Jabbar – then known as Lew Alcindor – in the middle. The Bruins wrapped up a 30-0 slate with Final Four wins against Houston and Dayton.

1972, UCLA – This was Bill Walton’s first title team with the Bruins, though he had help that year from senior Henry Bibby. The first of back-to-back 30-0 seasons wrapped up with an 81-76 championship game victory against Florida State.

1973, UCLA – Walton and the Bruins polished off another clean slate with an 87-66 drubbing of Memphis, giving Coach Wooden a seventh consecutive championship that will almost certainly never be matched.

1976, Indiana – Now in the 32-team era, Bob Knight’s Hoosiers needed five tournament wins to claim the title. But the all-star squad featuring the likes of Quinn Buckner, Kent Benson and Scott May took down UCLA in the Final Four then closed it out with an 86-68 triumph against Michigan.