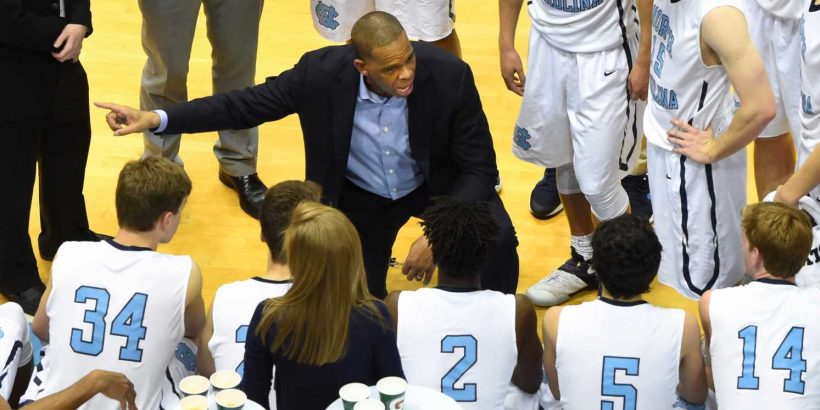 North Carolina didn't have to look far to find a replacement for Roy Williams. The school announced hiring assistant Hubert Davis to be its next men's basketball coach Monday.

Davis, 50, a former Tar Heels player for Dean Smith from 1988-92, served on Williams' staff for the past nine seasons. He previous worked for ESPN as a college basketball analyst and played in the NBA for six teams during a 12-year career.

He will become the first Black head coach of the program.

In a statement from the school, Davis acknowledged his former North Carolina coach Dean Smith and others.

"I am honored and humbled to be given the opportunity to lead this program,'' Davis said. "I would not be here without Coach Dean Smith, Coach Bill Guthridge and Coach Roy Williams; they taught me so much – and I'm eager to walk their path in my shoes and with my personality."

Davis was considered the favorite for the job among candidates with North Carolina ties that included UNC Greensboro's Wes Miller and Vanderbilt's Jerry Stackhouse. It is Davis' first head coaching position.

Williams stepped down after 18 seasons at the school. His tenure included five trips to the Final Four and three national titles. The Hall of Fame coach also spent 15 seasons at Kansas and led the Jayhawks to four Final Fours.

"Hubert Davis is the best leader we can possibly have for our men's basketball program." North Carolina athletic director Bubba Cunningham said in a statement.

"He has a tenacious, burning desire to be the best he can possibly be; we witnessed that when he was a player, a broadcaster and an assistant coach – and I have no doubt he will ensure than our student-athletes and program will be the best they can be, as well."