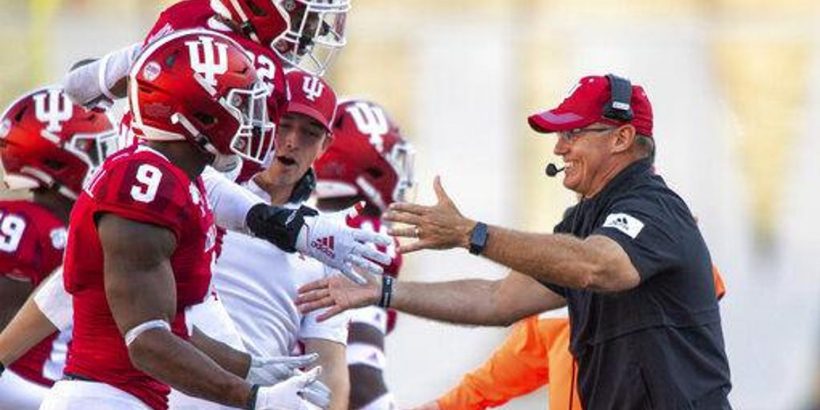 BLOOMINGTON, Ind. — After a win at Wisconsin, Tom Allen’s players said it.

“This is the best coach in America right here,” Indiana offensive guard Dylan Powell told ESPN as he passed Allen, who was in the middle of his postgame interview.

A little over a month after the Hoosiers made that postgame declaration, the American Football Coaches Association affirmed their stance in an official way.

Allen was named the AFCA’s national coach of the year Tuesday, becoming just the third Hoosier earn such a national honor. John Pont, who led IU to the Rose Bowl in 1967, was the last. Bo McMillin, who led the Hoosiers to an unbeaten record in 1945, is the other.

The 2020 season was historic in its own way, as IU overcame the years of underperformance that followed the McMillin and Pont eras. Allen’s squad finished 6-2. It beat Penn State for just the second time in 24 meetings. The Hoosiers beat Michigan after 24 consecutive losses. IU then added Michigan State and Wisconsin to the fallen, compiling a list of wins that no other IU team had.

For that, the Hoosiers have been recognized with top-10 rankings. Allen was named the Big Ten coach of the year, the program’s first since Bill Mallory won it in back-to-back years in the 1980s.

Allen was honored by the AFCA as a regional coach of the year in mid-December. Last year’s honoree was LSU’s Ed Orgeron following the Tigers’ national title run.

IU’s season was not only impressive for its six conference wins — tied for the most in program history — or IU’s No. 13 ranking in the final Amway Coaches Poll, which marks the sixth time IU has finished a season ranked and the first since 1988.

The 2020 season offered numerous moments where Allen’s “love each other” mantra was in the national spotlight. Allen tackled safety Devon Matthews after a game-sealing interception vs. Michigan. He shed tears for his injured son, Thomas Allen, during and after a shutout win at Michigan State, handing his son the Old Brass Spittoon in celebration.

Allen started to make numerous national television and radio appearances as the Hoosiers shot up the polls. He was even interviewed on Duke men’s basketball coach Mike Krzyzewski’s Sirius XM show. Coach K, a coaching icon and one-time IU assistant, said, “I want to damn play for you.”

It was quite the ascent for a coach who spent the years from 1992 to 2006 in the high school ranks, only crossing over to the college game in 2007 with Wabash.

Shortly after the Hoosiers were picked for this year’s Outback Bowl, which was considered a slight by the College Football Playoff committee, Allen recalled a question he received from a reporter after taking a job as linebackers coach at Ole Miss.

“ 'Can you pinch yourself? Three years ago you’re coaching at Lambuth University ',” Allen said, becoming worked up just from the thought of that question. “I knew what he meant by that. He meant, ‘You don’t belong here. How in the world did you end up in the SEC?’ He didn’t say it that way, OK? But that’s what he meant. And honestly, I responded, ‘I’m blessed.’