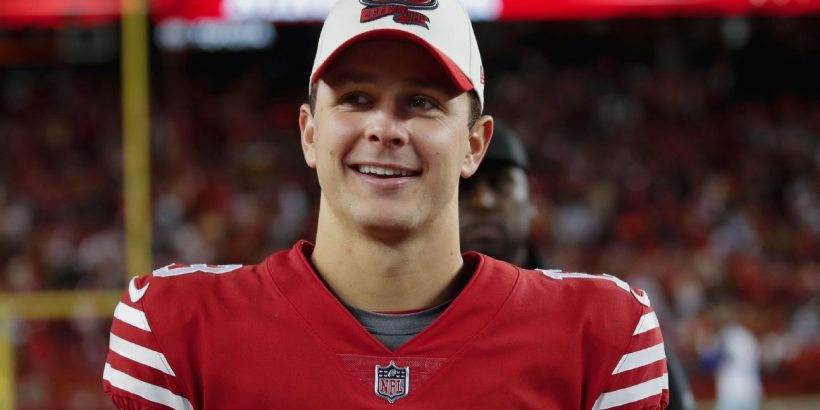 SANTA CLARA, Calif. — Late in the first half of his first playoff game as an NFL starting quarterback, Brock Purdy walked into the San Francisco 49ers’ huddle and spit out a playcall so quickly that none of his teammates understood it.

For the always-poised Purdy, it was the first time his teammates had seen him a bit overstimulated by the moment.

“We’re just like, ‘Brock, it’s OK, man, take a deep breath and call the play,'” tight end George Kittle said. “And he was fine after that.”

Seven starts into his young NFL career, Purdy has been more than fine. The last pick in the 2022 NFL draft has been a revelation in replacing injured incumbents Trey Lance and Jimmy Garoppolo.

Purdy has not only helped keep the Niners’ season alive but elevated the offense to places it hasn’t been since coach Kyle Shanahan took over as head coach in 2017.

The 49ers have won all seven of Purdy’s starts, including two playoff games, and the Niners have reached the NFC Championship Game for the second straight year and third time in four seasons. They’ll play at the Philadelphia Eagles on Sunday (3 p.m. ET, Fox).

Where the question of whether Purdy could do enough to keep the Niners competitive once stood now sits a completely different and more significant query: Is Purdy the Niners’ future at the game’s most important position?

It’s a question that doesn’t have an official, on-the-record answer right now, largely because there doesn’t have to be one. The Niners can let the rest of the season play out, see how Purdy fares as the stage gets bigger and then make the most informed decision possible.

But there’s no doubt Purdy has reshaped the conversation.

Which makes it worth taking stock of San Francisco’s quarterback situation and how it might evolve this offseason.

How has Purdy shifted the quarterback dynamic?

Purdy stepped into the starting job when Garoppolo was lost to a broken left foot during the Dec. 4 win against the Miami Dolphins.

Including that Miami game, the Niners have gone 8-0 with Purdy either starting or taking the bulk of the snaps. Since entering the lineup, Purdy has a QBR of 66.0 (fifth in the NFL) while completing 68.3% of his passes (fifth), averaging 218 passing yards per game (12th) and 8.12 yards per attempt (second) to go with 13 touchdown passes (tied for first) and three interceptions (tied for fourth-fewest).

In that span, San Francisco’s offensive output has jumped to 31.75 points per game (first in the league), a 77.18 ESPN offensive efficiency (first), 70.75 expected points added (first) and 6.18 yards per play (second). Before Purdy stepped in, the Niners ranked 15th, seventh, 12th and sixth in those categories.

Surrounded by elite skill position players such as Kittle, running back Christian McCaffrey, fullback Kyle Juszczyk and wideouts Deebo Samuel and Brandon Aiyuk and a top playcaller and designer in Shanahan, Purdy hasn’t been asked to carry the freight but to play the role of a point guard who can distribute the ball to his playmakers.

While Purdy has checked that box, he has also surprised many by making plays off schedule, especially in the red zone. And it’s his ball security that has earned Shanahan’s trust in short order.

“He’s been unbelievable with that,” Shanahan said. “I think that’s the No. 1 thing he’s done and to be able to be as good with the ball as he has while still making a number of the plays that he has, that’s definitely the thing I’ve been most impressed with.”

Is it Purdy’s job to lose?

Barring an injury or notably bad outing, most likely.

Every week, Purdy has faced a new test with increasingly significant stakes. He has passed each one without flinching, building a résumé that’s already longer than Garoppolo’s when he won his final five starts in 2017 and the Niners anointed him the starter with a five-year, $137.5 million contract the following offseason.

“He’s stacking meaningful wins, one on top of the other,” Tannenbaum said. “When you win a playoff game, that goes a long, long way in my mind. If he hasn’t cemented it yet, I think it’s pretty darn close.”

What’s more, Purdy is under contract for three more seasons at an average salary-cap number of $1,004,253 and isn’t eligible for a contract extension until after the 2024 season.

If Purdy earns the job, he’d be one of the most valuable players in the league, a quality starting quarterback on a bargain-rate rookie contract. Upcoming extensions for key players, such as defensive end Nick Bosa and Aiyuk, would suddenly become a lot easier to fit in the Niners’ cap puzzle.

What does this mean for Lance?

Almost two full seasons into Lance’s career, the Niners still don’t know what they have. Lance’s career has hit multiple injury roadblocks, including the broken right ankle he suffered in Week 2 after entering the season as the starter.

Considered a talented but raw prospect after the Niners traded three first-round picks to move up to take him No. 3 in the 2021 NFL draft, Lance has missed out on valuable NFL playing time.

In two seasons, Lance has started four games and played 248 offensive snaps. Given their investment and Lance’s talent, the Niners would undoubtedly love to see it through, but Purdy’s performance combined with Lance’s injury woes — he is expected to be back in time to participate in the offseason program in some capacity — has made that a more difficult proposition.

Lance has two years remaining on his rookie contract at cap numbers of $9.3 million in 2023 and $10.85 million in 2024. Those figures include the remaining $11-plus million worth of signing bonus proration that will be charged to San Francisco’s cap regardless of what happens next.

Which means the Niners have a few options.

They could have a competition between Lance and Purdy, depending on how Purdy fares the rest of the way.

They could attempt to trade Lance, though they’d have to eat that $11-plus million in dead money if they did, which is why Tannenbaum suggests it would take “something significant” along the lines of at least a first-round pick to make it worthwhile. That seems unlikely, though not impossible, even in a quarterback market in which plenty of wild stuff has happened in recent years.

Third, Lance could return as Purdy’s backup. After how this season has gone, nobody knows better than the Niners the value of having multiple reliable options at the game’s most important position.

If last offseason taught us anything, it should be to never rule out Garoppolo and the Niners reuniting. Against all odds, Garoppolo re-signed just before the start of the season after an offseason of limbo.

It was a move that proved prescient when the Niners lost Lance in Week 2. Garoppolo was playing some of the best football of his career before his injury, completing 67.2% of his passes for 2,437 yards with 16 touchdown passes to four interceptions — seemingly leaving the door open for another return.

This time, it’s hard to envision another reunion. As part of his reworked contract, the Niners can’t tag Garoppolo, which means he will hit unrestricted free agency in March.

Even with his lengthy injury history, Garoppolo figures to be one of the best options in a market where supply is unlikely to meet demand. All of that, combined with Purdy’s emergence, makes it a good bet that he’ll land a contract that pays him handsomely in another NFL city.

What about Tom Brady and other outside options?

Brady has loomed over the Niners since they passed on trying to sign him after the 2019 season. But Purdy’s play, Lance’s presence, Brady’s signs of slowing and the fact the Niners need to put resources into re-signing their own key free agents make it unlikely they’d dip their toes in the water for Brady or any veteran free agent who comes with a significant eight-figure contract.